Our common form for quality attribute expression has these parts:

■■ Stimulus. We use the term “stimulus” to describe an event arriving at the system. The stimulus can be an event to the performance community, a user operation to the usability community, or an attack to the security community. We use the same term to describe a motivating action for developmental qualities. Thus, a stimulus for modifiability is a request for a modification; a stimulus for testability is the completion of a phase of development.

■■ Stimulus source. A stimulus must have a source—it must come from some-where. The source of the stimulus may affect how it is treated by the system. A request from a trusted user will not undergo the same scrutiny as a request by an untrusted user.

■■ Response. How the system should respond to the stimulus must also be specified. The response consists of the responsibilities that the system (for runtime qualities) or the developers (for development-time qualities) should perform in response to the stimulus. For example, in a performance scenario, an event arrives (the stimulus) and the system should process that event and generate a response. In a modifiability scenario, a request for a modification arrives (the stimulus) and the developers should implement the modification—without side effects—and then test and deploy the modification.

■■ Response measure. Determining whether a response is satisfactory— whether the requirement is satisfied—is enabled by providing a response measure. For performance this could be a measure of latency or throughput; for modifiability it could be the labor or wall clock time required to make, test, and deploy the modification.

These four characteristics of a scenario are the heart of our quality attribute specifications. But there are two more characteristics that are important: environment and artifact.

■■ Environment. The environment of a requirement is the set of circumstances in which the scenario takes place. The environment acts as a qualifier on the stimulus. For example, a request for a modification that arrives after the code has been frozen for a release may be treated differently than one that arrives before the freeze. A failure that is the fifth successive failure of a component may be treated differently than the first failure of that component.

■■ Artifact. Finally, the artifact is the portion of the system to which the requirement applies. Frequently this is the entire system, but occasionally specific portions of the system may be called out. A failure in a data store may be treated differently than a failure in the metadata store. Modifications to the user interface may have faster response times than modifications to the middleware.

To summarize how we specify quality attribute requirements, we capture them formally as six-part scenarios. While it is common to omit one or more of these six parts, particularly in the early stages of thinking about quality attributes, knowing that all parts are there forces the architect to consider whether each part is relevant.

In summary, here are the six parts:

1.      Source of stimulus. This is some entity (a human, a computer system, or any other actuator) that generated the stimulus.

2.      Stimulus. The stimulus is a condition that requires a response when it ar-rives at a system.

3.      Environment. The stimulus occurs under certain conditions. The system may be in an overload condition or in normal operation, or some other rele-vant state. For many systems, “normal” operation can refer to one of a num-ber of modes. For these kinds of systems, the environment should specify in which mode the system is executing.

4.      Artifact. Some artifact is stimulated. This may be a collection of systems, the whole system, or some piece or pieces of it.

5.      Response. The response is the activity undertaken as the result of the arrival of the stimulus.

6.      Response measure. When the response occurs, it should be measurable in some fashion so that the requirement can be tested. 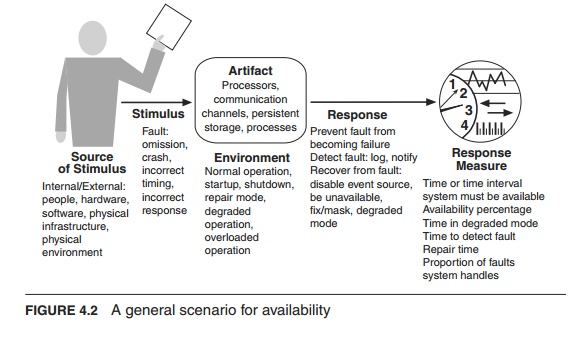