The neurologist, the orthopedist, the hematologist, and the dermatologist all have a different view of the structure of a human body. Ophthalmologists, cardiologists, and podiatrists concentrate on subsystems.

The neurologist, the orthopedist, the hematologist, and the dermatologist all have a different view of the structure of a human body. Ophthalmologists, cardiologists, and podiatrists concentrate on subsystems. The kinesiologist and psychiatrist are concerned with differentaspects of the entire arrangement's behavior. Although these views are pictured differently and have very different properties, all areinherently related: Together they describe the architecture of the human body.

So it is with software. Modern systems are more than complex enough to make it difficult to grasp them all at once. Instead, we restrict our attention at any one moment to one (or a small number) of the software system's structures. To communicate meaningfully about an architecture, we must make clear which structure or structures we are discussing at the moment—which view we are taking of the architecture. We will be using the related terms structure and view when discussing architecture representation. A view is a representation of a coherent set of architectural elements, as written by and read by system stakeholders. It consists of a representation of a set of elements and the relations among them.

A structure is the set of elements itself, as they exist in software or hardware. For example, a module structure isthe set of the system's modules and their organization. A module view is the representation of that structure, as documented by and usedby some system stakeholders. These terms are often used interchangeably, but we will adhere to these definitions.

Architectural structures can by and large be divided into three groups, depending on the broad nature of the elements they show.

Module structures. Here the elements are modules, which are units of implementation. Modules represent a code-based way of considering the system. They are assigned areas of functional responsibility. There is less emphasis on how the resulting software manifests itself at runtime. Module structures allow us to answer questions such as What is the primary functional responsibility assigned to each module? What other software elements is a module allowed to use? What other software does it actually use? What modules are related to other modules by generalization or specialization (i.e., inheritance) relationships?

Component-and-connector structures. Here the elements are runtime components (which are the principal units of computation) and connectors (which are the communication vehicles among components). Component-and-connector structures help answer questions such as What are the major executing components and how do they interact? What are the major shared data stores? Which parts of the system are replicated? How does data progress through the system? What parts of the system can run in parallel? How can the system's structure change as it executes? 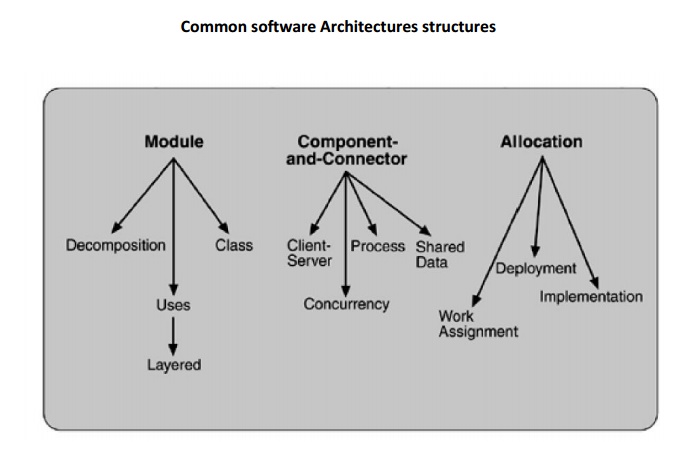 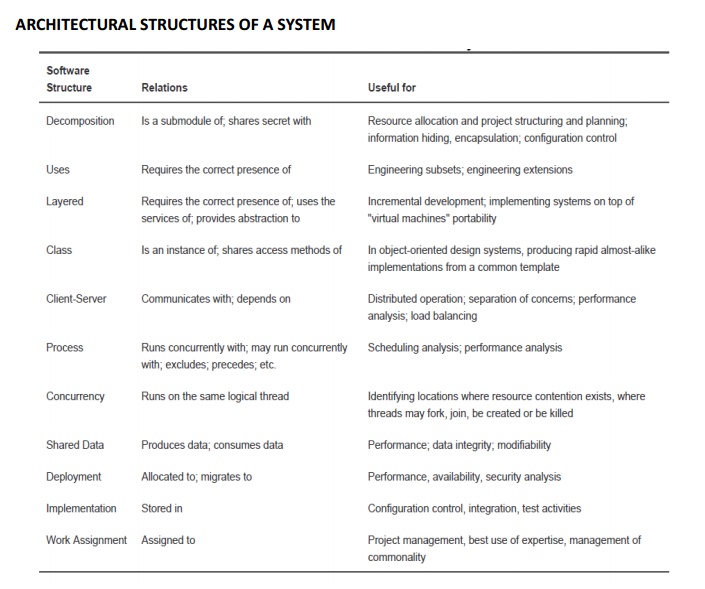