The specific immune response allows the development of true immunity to an infectious agent. Since true immunity can only develop after exposure to the virulent microorganism or a harmless vaccine derived from it, the response is often called acquired immunity. For example, an individual who has had measles is unlikely to suffer that disease again, even though exposure to the virus may occur subsequently even after many years. Two major features define a specific immune response. First, specific immunity is only induced towards the agent, called the immunogen, which stimulated it and secondly, the specific immune response is more rapid following subsequent contacts with that same immunogen. It is the rapid secondary response that prevents the development of disease in the immune individual. The ability to produce a quicker response on second contact with an immunogen is known as immunological memory. This process is mimicked by the use of vaccines, where an attenuated or less virulent strain of the microorganism is administered to induce immunity without causing the disease.

The body’s specific response to an infectious agent such as rubella virus, the cause of German measles, is to respond with two types of immunity, that is, humoral immunity and cell-mediated immunity. A specific immune response is only stimulated by an immunogen, which may be the whole microorganism but could merely be a protein, glycoprotein or lipoprotein. As a general rule, proteins with a Mr greater than 5000–10 000 are immunogenic. Polysaccharides are usually only weakly immunogenic, although they generally become more immunogenic when conjugated to a protein.

Cells of the specific immune system do not recognize the whole immunogen but, rather, small regions of immunogenic macromolecules known as epitopes. Usually, epitopes are sequences of 5–7 amino acid residues on immunogenic proteins, but they may also be short sequences of sugar residues in a polysaccharide, lipopolysaccharide or glycoprotein. A large macromolecule may have many epitopes that are recognized by the immune system. However, a protein that has some similarities with our own proteins, for example bovine serum albumin that has a similar size and structure to human albumin, will have fewer nonself regions recognizable as epitopes.

The term antigen is often confused with an immunogen and, indeed, some textbooks use the terms interchangeably. Here, an antigen is defined as something that will bind to the product of an immune response, such as an antibody. Nowadays the term is most commonly used when discussing immunotechniques, where an antibody is used to detect an antigen or quantify how much of it is present in a sample.

ROLES OF HUMORAL AND CELL-MEDIATED IMMUNITY

Most immunogens stimulate both humoral and cell-mediated immunity. Antibodies are found in body fluids, including blood and lymph, and have access to extracellular organisms. They are therefore most effective at eliminating microorganisms that live outside the cells of the host. Cell-mediated immunity, on the other hand, is effective against intracellular parasites, which includes all viruses and a number of intracellular bacteria, such as Mycobacterium tuberculosis and Listeria monocytogenes. However, antibodies are useful in protecting cells in the initial stages of a viral infection and in preventing the spread of viruses from one cell to another.

In a humoral response, the immune system produces specific glycoproteins called antibodies that are found in the blood plasma, mostly in the F globulin fraction (Figure 4.7), in lymph and in body secretions such as saliva, tears, mucus and milk. Antibodies have binding sites that are complementary to the shape of an epitope. These sites allow antibodies to bind to the epitopes of the immunogen and initiate its destruction by a variety of other agents, such as complement, phagocytic cells and LGLs. Collectively, antibodies are known as immunoglobulins (Igs) which are heterogeneous molecules indeed becauseeach antibody is specific for an individual epitope. Despite this heterogeneity, they can be divided into one of five major classes or isotypes, IgG, IgM, IgA, IgE and IgD, based on differences in their structures, and particularly in the amino acid sequences of their largest polypeptide subunits which are known as heavy chains (see below). Some of their properties are listed in Table 4.3. 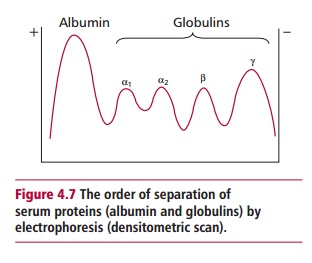 Immunoglobulin G (IgG) is the most abundant antibody in the blood where it is found at concentrations of approximately 13.5 mg cm–3. It is evenly distributed between the vascular and extravascular compartments. In humans, IgG occurs as four subclasses, all with slightly different properties and roles in the body. For example, all subclasses except IgG4 can activate complement (Table 4.3). Immunoglobulin G is produced after IgM on exposure to an immunogen and is the predominant antibody produced on a second exposure, that is in the secondary response. It is also the only antibody in humans that can cross the placenta to allow maternal antibodies to protect the developing fetus from infection. On some occasions, this may cause problems as, for example, when the mother has become sensitized to fetal antigens or has an autoimmune disease . 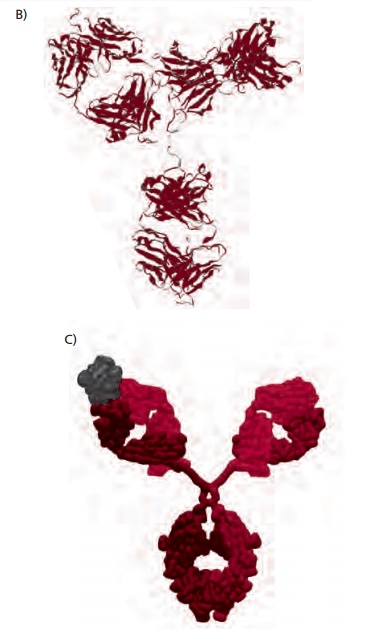 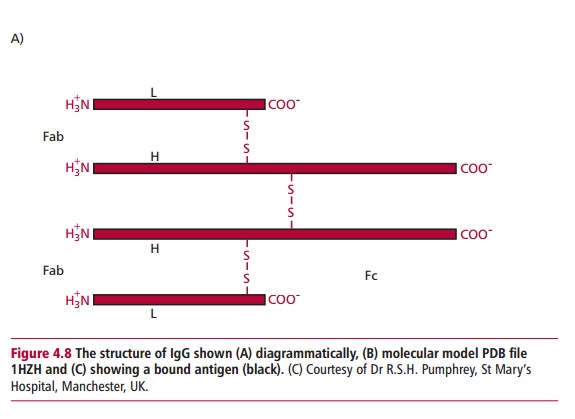 Immunoglobulin G is a symmetrical molecule consisting of four polypeptide chains joined by disulfide bonds as shown in Figure 4.8(A). The four chains consist of two identical heavy chains each with a Mr of 50 000 and two identical light chains each with a Mr of 25 000. Both heavy and light chains have a domain structure. A domain is a globular region made up of approximately 110 amino acid residues and stabilized by an intrachain disulfide bond (Figure 4.9). The heavy chain of IgG has four domains while the light chain has only two. 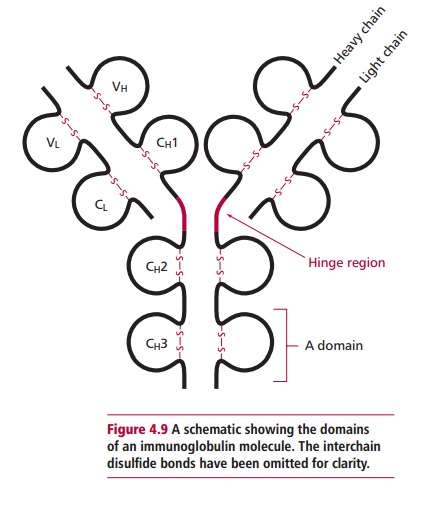 The interchain disulfide links between the two heavy chains and between the light and the heavy chains (Figure 4.8 (A)) produce two units, called the Fab, or fragment antigen binding, part of which can recognize and bind to an epitope (Figure 4.8 (C)). The remainder of the molecule, consisting only of the carboxyl terminal halves of the heavy chains is known as the Fc, or fragment crystallizable, portion. The Fc region is concerned with complement activation, placental transfer and binding to LGL and phagocytes.

Immunoglobulin M (IgM) is the largest of the antibodies with a Mr of about 900 000. Its concentration in the plasma is roughly 1.5 mg cm–3, which is approximately 10% of the plasma immunoglobulins. Most IgM is vascular, with little present in lymph or secretions. Immunoglobulin M is always the first antibody to be produced during an immune response and is also the predominant one formed when an immunogen is encountered for the first time, that is, during a primary response (Figure 4.10). The structure of IgM is shown in Figure 4.11 (A). Four polypeptide chains form a structure somewhat similar to that of IgG but this four-chain structure is repeated five times. The five units are joined by their Fc portions by a J chain. Thus, each molecule of IgM has ten binding sites, the largest number of any of the antibody classes. Immunoglobulin M is efficient at agglutinating cells or clumping them together, and is an effective activator of complement. 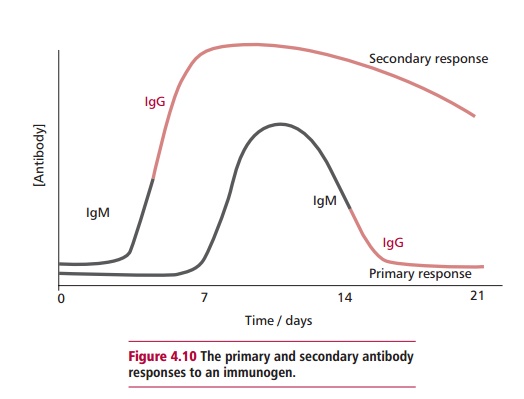 Immunoglobulin A (IgA) is found in plasma at concentrations between 0.5– 3.0 mg cm–3 but is also the major antibody found in body secretions, including mucus, saliva and tears. Thus, it protects mucosal surfaces. In humans, most plasma IgA occurs in the familiar four chain structure, similar to IgG 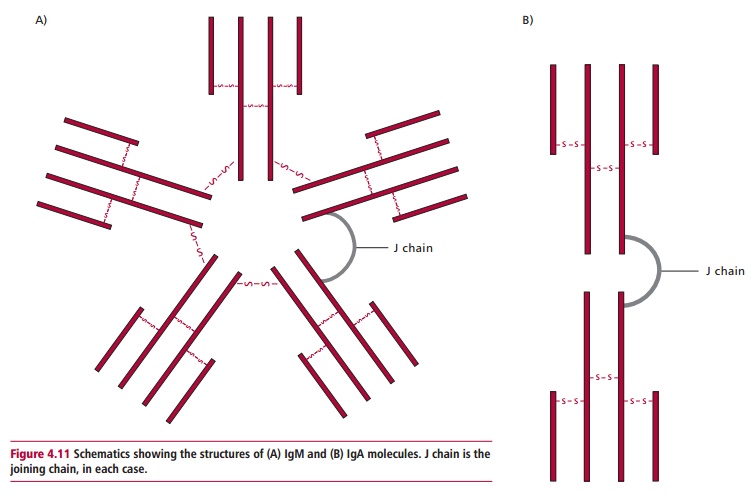 and with a Mr of 160 000. However, a proportion of plasma IgA also exists as a dimer, in which IgA molecules are joined together by a protein called the joining chain(s) (Figure 4.11 (B)). Secretory IgA exists in this dimeric form but is protected from enzymic attack by an additional protein known as the secretory component.

Immunoglobulin E (IgE) is found in plasma at a concentration of about 5 x 10–5 mg cm–3. Most IgE is found bound to the surface of blood basophils and tissue mast cells, which possess a high affinity receptor for the heavy chain of this immunoglobulin.

Binding to these cells prolongs the half-life of IgE from two days to several weeks. Despite its low plasma concentrations, IgE is a potent stimulator of inflammation, since binding of epitopes to mast-cell bound antibody can trigger degranulation of these cells. The proinflammatory nature of IgE is seen in the elimination of multicellular parasites, such as tapeworms and nematodes. However, in susceptible individuals, this antibody can also trigger an inflammatory response to otherwise harmless immunogens, such as pollen, resulting in allergic reactions .

Immunoglobulin D (IgD) is found in plasma at a concentration of about 30 Lg cm–3. Its role as a secreted antibody is uncertain. Hyperimmunoglobulin Dsyndrome (HIDS), in which IgD levels are increased, is associated with periodic fever and joint disease. However, IgD does have a role in the recognition of epitopes by cells of the specific immune system.