Production of a Specific Immune Response

All small lymphocytes are specific for a single epitope on an individual immunogen. This means that they will respond only to that epitope and no other.

PRODUCTION OF A SPECIFIC IMMUNE RESPONSE

All small lymphocytes are specific for a single epitope on an individual immunogen. This means that they will respond only to that epitope and no other. The basis of this specificity depends on lymphocyte membrane proteins that act as receptors for individual epitopes. The receptors on B lymphocytes are surface immunoglobulins that have the same specificity as the antibody that the cells will subsequently secrete following appropriate stimulation. The surface antibodies on a single cell may belong to more than one class, so, for example, B lymphocytes may express both IgG and monomeric IgM, but these will have identical specificities. The T cell receptor (TCR) is composed of two polypeptide chains that form a single binding site. All the receptors on a single T cell have the same specificity.

Although T and B cells have different types of receptor and are involved in different aspects of the immune response, there are some similarities in the way they are activated and respond to a specific epitope. For example when both B and T lymphocytes are exposed to an appropriate epitope they enter a series of cell divisions that result in the production of a clone of cells of identical specificity (Figure 4.16). These cell divisions require cytokines that are produced and secreted by TH lymphocytes once they have been appropriately stimulated. Most of the cells in the clone of small lymphocytes then differentiate into effector cells, the nature of which depends on the type of small lymphocyte that was stimulated. Not all the cells in the clone differentiate at this stage. Some remain as memory cells, awaiting the next exposure to the same immunogen when a faster and quantitatively greater response is produced. 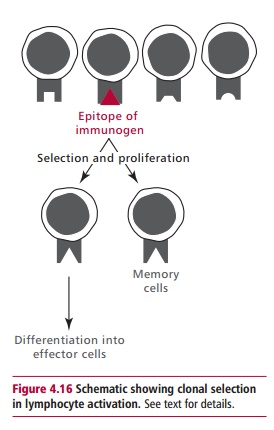 The response of B lymphocytes to an immunogen is outlined in Figure 4.19. Once the receptors on B lymphocyte bind to an epitope on the immunogen, the lymphocyte is stimulated to divide and differentiate under the influence of cytokines released from TH lymphocytes, to form a clone of antibody-secreting cells called plasma cells(Figure 4.20). Plasma cells are not found in the blood of healthy individuals. Instead, they are present in the lymph nodes and spleen, where they secrete antibodies until they die after a lifespan of a few days to several months. Antibody secreted by plasma cells in lymph nodes first appears in the lymph and then the blood, while antibody produced in the spleen moves directly to the blood. 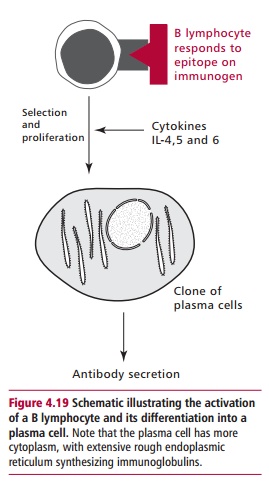 The class of antibody that is secreted depends, in part, on which B lymphocyte was stimulated and on the cytokines that influenced its differentiation. Certain cytokines are known to favor the production of antibodies of a particular class. For example IL-4 promotes the production of IgE, and favors a response to multicellular parasites. However, a predisposition to produce IgE may also make that individual more susceptible to allergic reactions, such as hay fever and allergic asthma, as will be discussed. 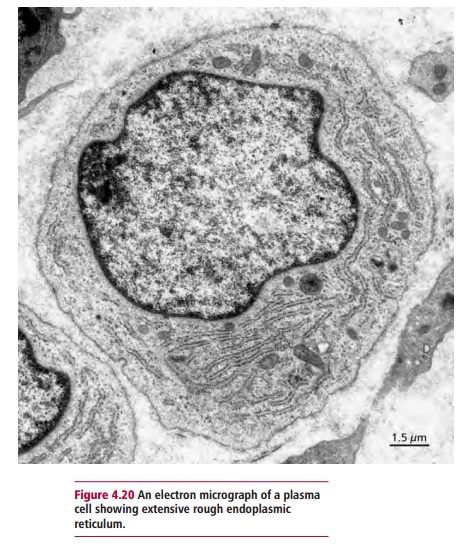 Although Figure 4.19 illustrates a single B lymphocyte responding to a single epitope on an immunogen to give rise to a single clone of plasma cells, in reality an immunogen, such as a bacterium, contains numerous proteins each of which may have hundreds of epitopes. Thus, a humoral immune response involves the stimulation of many B lymphocytes, each of which can proliferate into a clone. Although each clone produces only a single type of antibody, called a monoclonal antibody, hundreds of clones are formed so that the response of the system is polyclonal, resulting in a heterogeneous array of antibodies appearing in the blood.

The manner in which T lymphocytes recognize foreign epitopes is rather more complex than that used by their B lymphocyte counterparts, as the receptors on T cells are unable to bind to epitopes on ‘native’ proteins. Instead, peptides derived from the foreign protein are ‘presented’ to them on the surfaces of other host cells, bound to membrane proteins encoded by a genetic region called the Major Histocompatibility Complex (MHC). In humans, this genetic region is found on chromosome 6. The proteins encoded by the MHC include two classes of membrane proteins. Class I proteins are found on all nucleated cells in the body. They consist of a single polypeptide, the @ chain, which is associated with a smaller protein called A2 microglobulin (A2M) that is not encoded within the MHC. Class II proteins are found on only a few cell types and are made up of two polypeptides, @ and A, both encoded within the MHC. Both Class I and II proteins have grooves that can bind a foreign peptide in an extended form (Figures 4.22 and 4.23). The peptide-binding groove is formed by the @1 and @2 domains of the Class I molecule and the @1 and A1 domains of the Class II molecule, while these structures are supported, in the Class I molecule by the @3 domain and the A2M, and in the Class II molecules by the @2and A2domains.

The requirement to have foreign peptides presented by different MHC molecules to TC and TH cells can be explained by looking at their roles in vivo. 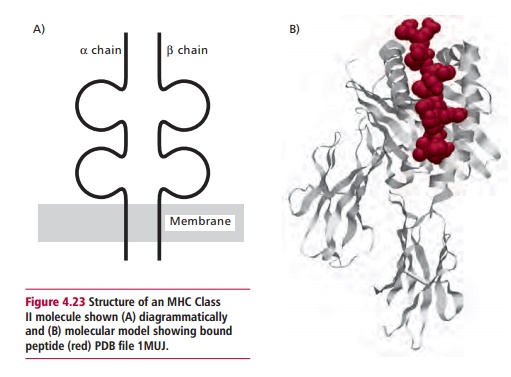 The role of TC cells is, ultimately, to destroy virus-infected cells. Since all nucleated cells are susceptible to such infections, MHC encoded Class I molecules are required by these cells to present endogenously produced viral peptides to TC cells. Thus, viral protein produced within the cytoplasm of an infected cell may be hydrolyzed to produce short peptides, about 8–12 amino acid residues in length. These peptides are then transported across the endoplasmic reticulum where they become attached to Class I proteins and the complex transported to the surface of the cell membrane in Golgi vesicles. 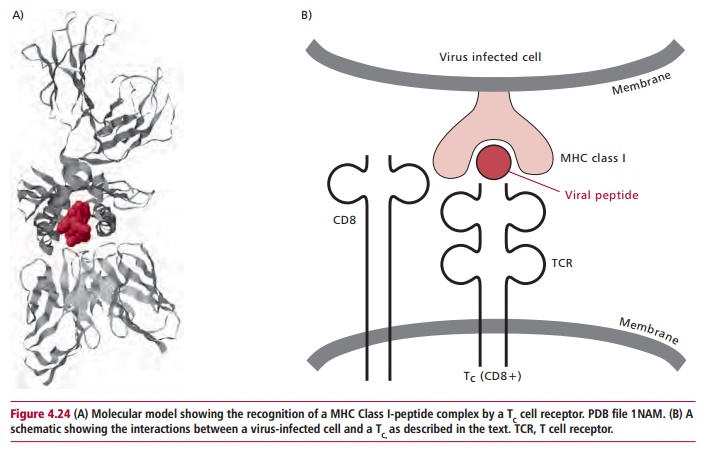 The TC cell is activated when the T cell receptor recognizes the complex of MHC Class I protein with its bound virus derived peptide and binds to it (Figure 4.24 (A) and(B)). An accessory protein, CD8, is also involved in this interaction asit also binds to the MHC protein. Once bound, the TC cell is stimulated into a series of mitotic divisions to form a clone of cells, which then differentiate into cytotoxic T lymphocytes (CTL). These cells resemble TC cells but their cytoplasm is more granular, owing to the presence of vesicles containing cytotoxic proteins called granzymes and perforins. The CTL binds to a virus infected cell using the same mechanism as the Tc cell, and then releases these cytotoxic proteins which destroy the target cell. Cytotoxic T lymphocytes also release IL-2 and IFN F which stimulate NK cells and macrophages to kill virus infected cells.

When stimulated by an immunogen, TH cells secrete cytokines required for specific and nonspecific immune responses. Thus they are required for an effective immune response to the whole range of infectious agents, from viruses to multicellular parasites. In order to activate a TH cell, an immunogen has to be taken up by an antigen presenting cell (APC). Here, its proteins are hydrolyzed within endocytic vesicles and the resulting peptides of 12–19 amino acid residues are attached to MHC encoded Class II proteins and transported to the cell membrane. The MHC Class II protein and foreign peptide complex is recognized and bound by a TCR (Figure 4.25). The coreceptor protein, CD4, also binds to the MHC protein. Several different types of cells can act as APCs, including monocytes, macrophages, dendritic cells in the lymphoid tissues and Langerhans cells of skin. However, under certain conditions, other cells, including epithelial cells, can be induced to express MHC Class II proteins and it has been proposed that such cells may initiate autoimmune reactions . 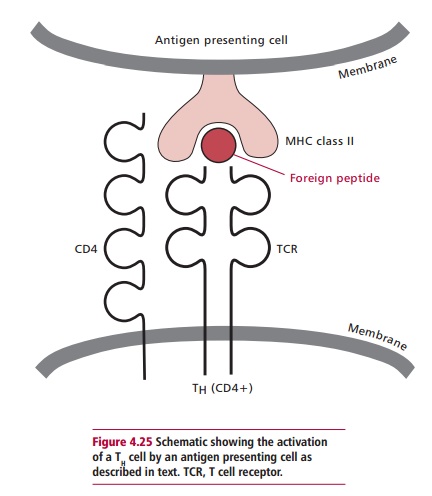 There are two subsets of TH cells, called TH1 and TH2. They differ in the profile of cytokines they secrete as shown in Table 4.5. Cytokines produced by TH1 favor the development of cell-mediated immunity, which is used to destroy intracellular parasites such as viruses. Those produced by TH2 cells stimulate humoral immunity to extracellular parasites, including most bacteria and helminth worms and flukes. In addition, cytokines produced by TH1 inhibit TH2 cells and vice versa.