Microorganisms are prevented from entering the body by structural barriers, such as the skin and the mucosal membranes. These barriers are further protected by chemical secretions, for example lactic acid in sebum and hydrochloric acid secreted in the stomach. Furthermore, mucus, secreted by the mucosal membranes that line the urogenital, respiratory and gastrointestinal tracts, contains lysozyme, an antibacterial enzyme that catalyzes the hydrolysis of the peptidoglycan wall of some types of bacteria. Should microorganisms breach these barriers, other antimicrobial proteins such as complement and interferons may be activated and/or produced. Finally, there are a number of cells that have a role in the elimination of microorganisms. These cells may be found in the blood, although a number are also found in the solid tissues. Some blood cells move between the blood and the extravascular tissues, particularly during an infection.

Interferons (IFNs) are families of inducible, secretory proteins produced by eukaryotic cells in response to viral infections and other stimuli. They disrupt viral replication in neighboring healthy cells by inducing those cells to produce enzymes that inhibit replication of viral nucleic acid and the production of viral proteins. There are three major families of interferons: IFNs @ AAand F. Interferons @ and AAare produced by cells that have been infected with a virus. They are the predominant forms produced by leukocytes and fibroblasts respectively, although both types are produced by other viral infected cells in the body. Interferon F is produced by cells of the specific immune system in response to any agent, whether bacterium, virus or foreign protein, which stimulates that system.

Interferons belong to a large family of proteins called cytokines, a general name given to proteins secreted by cells that stimulate activities in other cells after binding to receptors on their surfaces. Cytokines act at low concentrations and may stimulate different activities depending on the type of target cell. Many different cytokines are involved in the immune response and some are now used therapeutically. Interferon @ has been used to treat hairy cell leukemia and Kaposi’s sarcoma , while IFN A is used in the treatment of multiple sclerosis and IFN FFhas been used to treat several immune deficiency diseases . Cytokines are also involved in the pathology of a number of diseases, particularly inflammatory disorders, such as rheumatoid arthritis .

Complement is the name given to a set of about 30 plasma proteins, some of which are listed in Table 4.1 and which, when activated, can combat an infection by lysing the invading microorganisms, stimulating inflammation and promoting the uptake of the microbe by phagocytic cells. Activation of complement can be achieved in one of several ways. The classical pathway is initiated when antibody binds to the microorganism. This pathway may therefore take several days to become effective if specific antibody is not already present. The classical pathway for activation initially involves complement proteins C1–C4 (Table 4.1). An alternative pathway can be activated in the absence of antibody by cell wall components of bacteria, such as lipopolysaccharide. This first line of defense against microorganisms uses the complement proteins C3, and Factors B and D. Both pathways feed into a common pathway involving complement proteins C5–C9 that results in lysis of the target cell (Figure 4.1). Both pathways also result in the production of small peptides that induce phagocytosis and inflammation. The classical and alternative pathways are described. Complement is also activated by C-reactive protein (CRP), and mannose-binding lectin (MBL), both of which are plasma proteins produced by the liver during the early or acute stage of an infection. Mannose-binding lectin is, as its name implies, a protein that binds to mannose residues on bacteria. This activates an associated protease that, in turn, activates proteins of the classical pathway. Thus, it provides a means of entering the classical pathway in the absence of antibody. 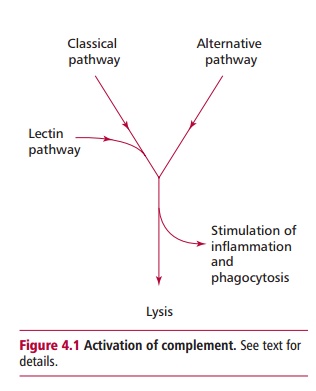 Complement is essential for immunological defense. Indeed, a deficiency of just a single complement protein can lead to increased susceptibility to bacterial infections. Complement is also involved in the pathology of a number of immunological disorders, including autoimmune diseases, such as rheumatoid arthritis and autoimmune hemolytic anemias .

Leukocytes are the white blood cells produced from precursor stem cells present in the bone marrow. All have immunological roles. About 80% of them are involved in nonspecific immune defense but the small lymphocytes  are the cells of the specific immune system whose products control the numbers and activities of the nonspecific cells and so the two systems are interlinked. 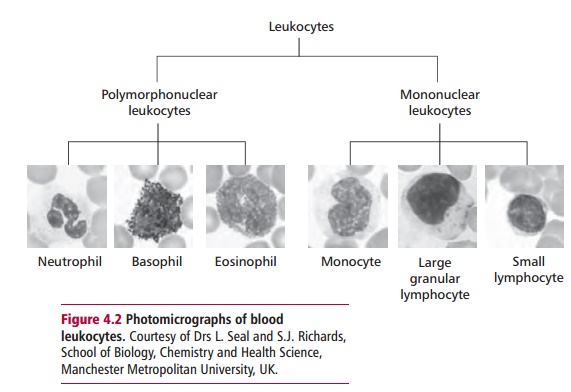 Neutrophils, which make up around 60% of the blood leukocytes, are phagocytic cells that ingest and kill bacteria. These cells have receptors for antibodies and for the activated complement protein, C3b. Thus, neutrophils will bind readily to bacteria coated with any of these proteins, and phagocytosis is promoted (Figure 4.3). This phenomenon is known as opsonization. The killing of the 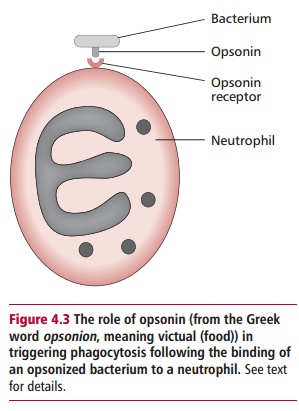 ingested bacteria is achieved through several different mechanisms, including the use of lysosomal enzymes , production of antibacterial chemicals, such as hydrogen peroxide, hypochlorite and nitric oxide and the use of cytoplasmic proteins known as defensins that attack the membranes of the ingested microbe.

Basophils (Figure 4.2) are found in low numbers in the blood and usually form less than 1% of the leukocytes present. Basophils promote inflammation. They have prominent cytoplasmic granules which take up basic stains such as toluidine blue, and contain an abundance of pharmacologically active agents, such as histamine and heparin, and factors that are chemotactic for other PMNs (Table 4.2). In addition, basophils have the capacity to synthesize and secrete other mediators when appropriately stimulated. The primary, that is granular, and secondary induced mediators are necessary to promote and maintain inflammation and their inappropriate release can result in immunological disorders such as hay fever and allergic asthma . Despite their relatively low numbers in the blood, basophils are essential for initiating inflammation. However, a similar type of cell known as a mastcell, which is found in solid tissues rather than blood, is of greater clinicalsignificance. Mast cells are found throughout the body but especially in the skin, mucosal membranes and epithelia of the respiratory and gastrointestinal tracts and in the connective tissue of a variety of internal organs. Mast cells are highly granular and contain similar mediators to the basophil although the granular contents may vary according to location. Mast cells also secrete a number of cytokines, many of which are proinflammatory, that is they 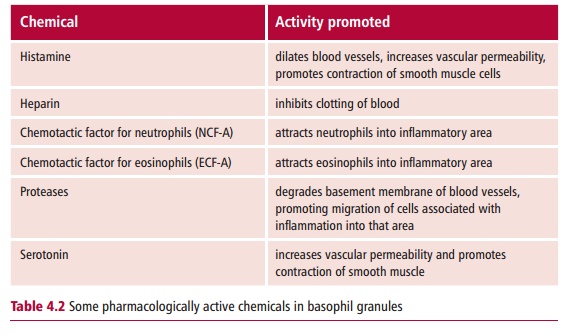 promote inflammation. Both mast cells and basophils have receptors for a particular class of antibody, known as immunoglobulin E  and this has significance in the pathology of some of the most common immunological disorders, namely allergies .

Like basophils, eosinophils are found in low numbers in the blood and usually constitute less than 2% of white cells. They also have prominent cytoplasmic granules but in this case they take up acidic stains, for example eosin, because they contain highly basic proteins. Though capable of phagocytosis, the major role of eosinophils is to assist in the elimination of multicellular parasites such as tapeworms and nematodes . Eosinophils first bind to the surface of the helminth, often using antibodies and then secrete their toxic granular proteins onto its surface. Eosinophils can be attracted to areas of inflammation by chemotactic factors secreted by basophils and mast cells.

The mononuclear leukocytes comprise three distinct groups of cells: monocytes and large granular lymphocytes (LGLs), which are nonspecificcells, and small lymphocytes that are responsible for the specific immune response.

Monocytes (Figure 4.2) make up approximately 5% of the blood leukocytes. They have a characteristic indented, often horseshoe-shaped nucleus and a granular cytoplasm. Monocytes are immature cells that circulate for only a matter of hours before they enter the solid tissues and develop into macrophages. The spleen, lungs, liver, lymph nodes and tonsils containespecially high numbers of macrophages. Monocytes and macrophages are phagocytic cells, clearing the blood and solid tissues of microbes as well as dead or dying host cells, including neutrophils and erythrocytes. Their numbers and generalized distribution ensure they effectively clear foreign material. Macrophages have killing mechanisms similar to those found in neutrophils and can be stimulated by target cells coated with antibodies and/or complement proteins. Following phagocytosis of microorganisms, especially bacteria, they secrete a range of cytokines, including interleukins 1 (IL-1), 6 (IL-6) and 8 (IL-8) and tumor necrosis factor alpha (TNF @) Interleukin 1, IL-6 and TNF-@ are proinflammatory and are responsible for initiating events in the early or acute phase of infection, while IL-8 is a chemokine that attracts neutrophils to its source.

Monocytes and macrophages also play significant roles in the specific immune response since they are able to ‘process’ foreign material and ‘present’ it to certain types of small lymphocyte in a form they can recognize. As such, they are known as antigen presenting cells (APC), although they are not the only cells to carry out this activity.

Large granular lymphocytes (LGL) make up 5–10% of the blood leukocytes. These cells have rounded nuclei and a granular cytoplasm (Figure4.2). Functionally, LGL represent a mixed population of cells: some arenatural killer (NK) cells that kill virus-infected cells and some tumor cellsnonspecifically. Natural killer cells bind to the target cell and release proteins, some of which perforate the target cell membrane while others induce a genetically programmed cell death called apoptosis. Natural killer cells are the first line of defense against viruses since they prevent their replication and spread. They may also form a defense against potential tumors by destroying some cancerous cells as they arise in the body .

INFLAMMATION AND THE ACUTE PHASE RESPONSE 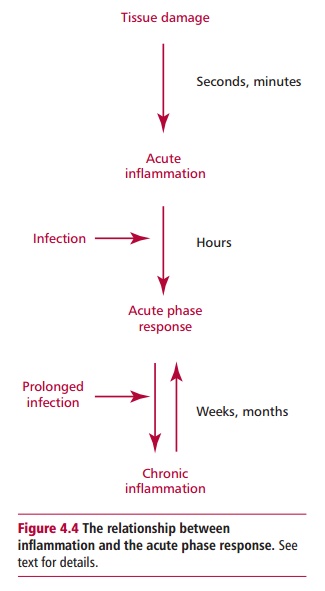 Inflammation is a rapid local response to tissue damage, as would happen, for example, if the skin is scratched by a thorn. The response is characterized by reddening and swelling of the skin as well as sensations of heat and pain at the damaged site. Inflammation is initiated by the release of mediators, especially histamine, from mast cells in the damaged area (Figure 4.5). Histamine causes blood vessels to dilate and become leaky so that plasma escapes into the damaged tissue where it dilutes any noxious agents that entered at the damaged site, and helps to wash them away into the lymph. If bacteria enter the damaged area they activate complement to release proteins that are chemotactic to neutrophils, encouraging them to move out of the blood between the lining endothelial cells.

The acute phase response occurs within hours of exposure to microorganisms. This is a systemic response involving the whole body and several organ systems. The response is brought about by cytokines, including IL-1, IL-6 and TNF @ released by monocytes and macrophages. An acute phase response results in changes in the composition of the blood, including an increased neutrophil count and the appearance of, or increase in, a number of defense proteins called acute phase proteins. The appearance in the blood of a particular protein, C-reactive protein (CRP), which binds to bacteria and activates complement, is often used as a marker of infection. The plasma concentration of CRP prior to an acute phase response is so low as to be barely measurable; thereafter its synthesis increases 100–1000 fold.

The acute phase response is a primary defense against infection, with multiple beneficial effects. However, it has the potential to cause harm if an infection is prolonged. For example, acute phase proteins are synthesized in the liver from amino acids released by the enzyme catalyzed proteolysis of muscle tissues. Following an acute infection, this muscle protein is rapidly replaced. However, a chronic infection, such as tuberculosis, can result in severe and prolonged muscle wastage, a condition known as cachexia. High body temperature, or fever, is another symptom of the acute phase response. While elevated body temperatures may inhibit the replication of bacteria, fever can be dangerous, especially in children, if the temperature becomes too high.