The tension co efficient for a member of a frame is defined as the pull or tension in that member is divided by its length.

t = T/l Where t = tension co efficient for the member

T= Pull in the member

1. List the coordinates of each joint (node)of the truss.

3. Resolve the the applied the forces at the joint in the X and Y directions. Determine the support reactions and their X and Y components.

4. Identify a node with only two unknown member forces and apply the equations of equilibrium. The solution yields the tension co efficient for the members at the node.

5. Select the next joint with only two unknown member forces and apply the equations of equilibrium and apply the tension co efficient.

1. In step 2 above the projected lengths Zij in the directions are also computed. Determine the support lengths lij of each member using the equation lij =?Xij2+Yij2 +Zij2

2. In step 3 above the components of forces and reactions in the Z directions are also to be determined.

3. In step 4 and 5,each time, nodes with not more than three unknown member forces are to be considered. 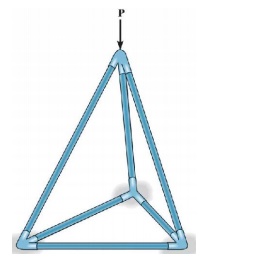 In order to obtain the internal forces at a specified point, we should make section cut perpendicular to the axis of the member at this point. This section cut divides the structure in two parts. The portion of the structure removed from the part in to consideration should be replaced  by the internal forces. The internal forces ensure the equilibrium of the isolated part subjected to the action of external loads and support reactions. A free body diagram of either segment of the  cut member is isolated and the internal loads could be derived by the six equations of equilibrium applied to the segment in to consideration.

In the following example we shall construct the internal forces diagrams for the given in Fig. space frame structure. The introduced global coordinate system is  shown in the same figure. 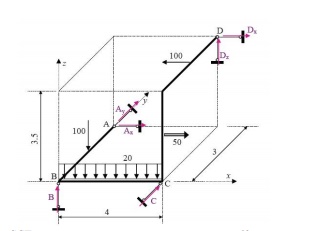 The introduced local coordinate systems of the different elements of the space frame are presented in Fig. The typical  sections where the internal forces must be calculated, in order to construct the relevant diagrams, are numbered from 1 to 8 in the same figure. The typical  sections are placed atleast at the beginning and at the end of each element (segment) of the frame. The internal forces diagrams, in the limits of each element, could be derived by using the corresponding reference and base diagrams. 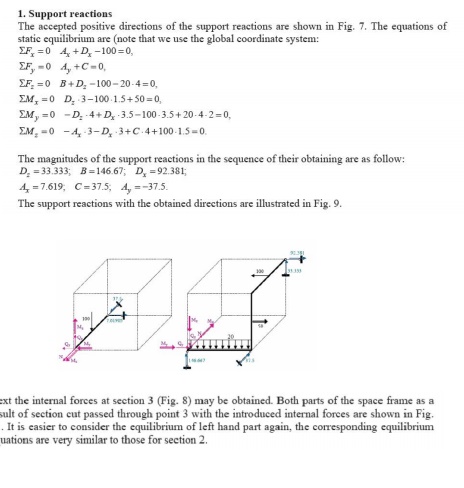 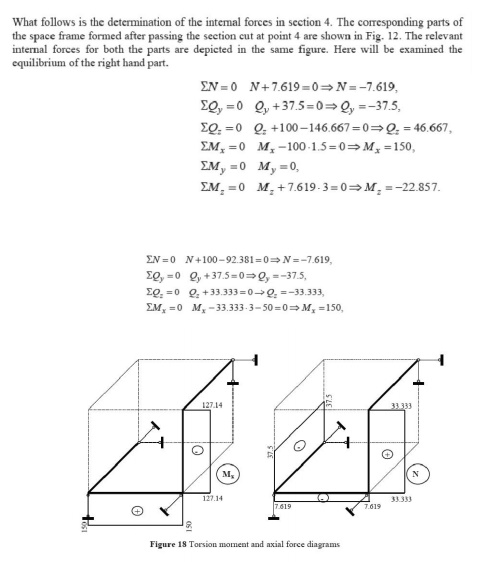 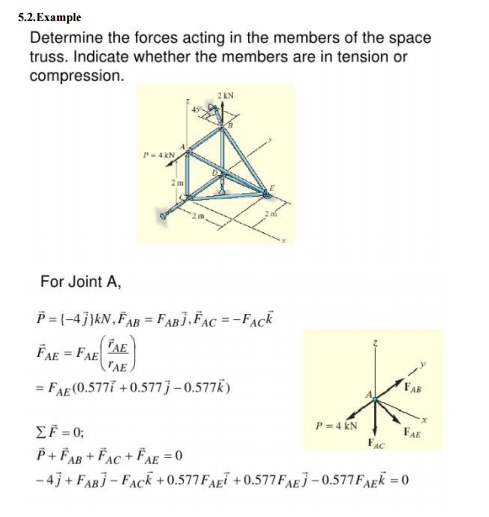 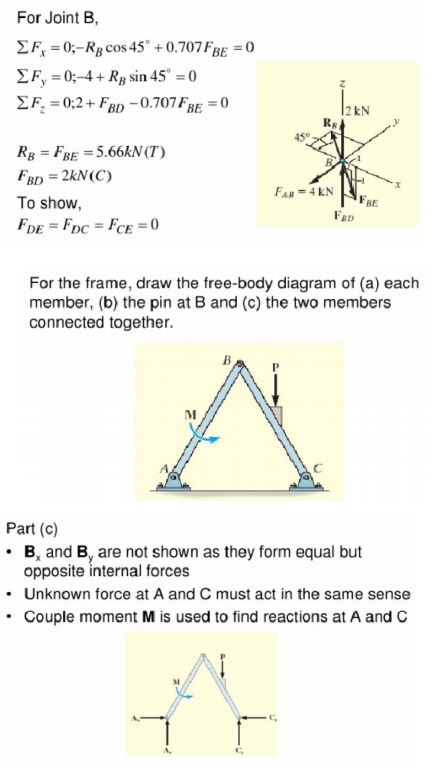 Arches are in fact beams with an initial curvature. The curvature is visible only in elevation. In plan they they would appear in straight. the other cases of curved beams are ring beams supporting water tanks, Silos etc., beams supporting corner lintels and curved balconies etc., Ramps in traffic interchanges invariably have curved in plan beams.

Curved beams in addition to the bending moments and shears would also develop torsional moments.

Cables and archesareclosely related to each other and hence they are grouped in this course in the same module. For long span structures (fore.g.in case bridges) engineers commonly use cable or arch construction due to their efficiency. In the few previous pages, cables subjected to  uniform and concentrated loads are discussed. In the few previous pages, arches in general and threehingedarchesin particular along with illustrative examples are explained.

In the last few pages, two hinged arch and hinge less arches are considered. Structure may be classified into rigid and deformable structures depending on change in geometry of the structure while supporting the load. Rigid structures support externally applied loads without appreciable change in their shape (geometry). Beams trusses and frames are examples of rigid structures.

Unlike rigid structures, deformable structures undergo changes in their shape according to externally applied loads. However, it should be noted that deformations are stillsma ll. Cables and fabric structures are deformable structures. Cables are mainly used to support suspension roofs, bridges and cable car system. They are also used in electrical transmission lines and for structure supporting radio antennas. In the following sections, cables subjected to concentrated load and cables subjected to uniform loads are considered.

As stated earlier, the cables are considered to be perfectly flexible (no flexural stiffness) and in extensible. As they are flexible they donot resistshear force and bending moment. It is subjected to axial tension only and it is always acting tangential to the cable at any point along the length. If the weight of the cable is negligible as compared with the externally applied loads then its self weight is neglected in the analysis. In the present analysis self weight is not considered.

Consider a cable as loaded in Fig.5.3. Let us assume that the cable lengths and sagat() are known. The four reaction component sat ACDEB and B, cable tensions in each of the four segments and three sag values: a total of eleven unknown quantities are to be determined. From the geometry, one could write two force equilibrium equations (0,0==??yxFF) at each of the point and DCBA,,,Ei.e. a total of ten equations and the required one more equation may be written from the geometry of the cable. For example, if one of the sag is given then the problem can be solved easily. Otherwise if the total length of the cable is given then the required equation may be written as 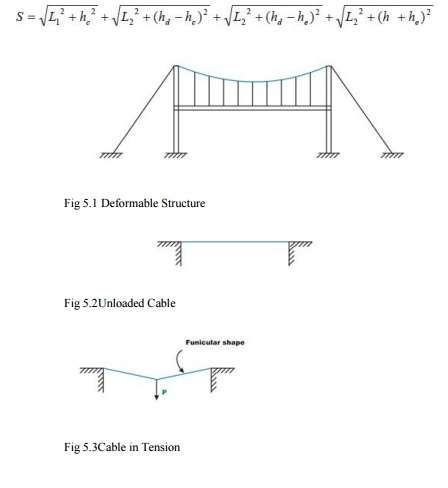 Cables are used to support the dead weight and live loads of the bridge decks having long spans.

The bridge decks are suspended from the cable using the hangers. The stiffened deck prevents the supporting cable from       changing its shape by distributing the live load moving over it, for a longer length of cable. In          such cases   cable is assumed to be uniformly loaded. 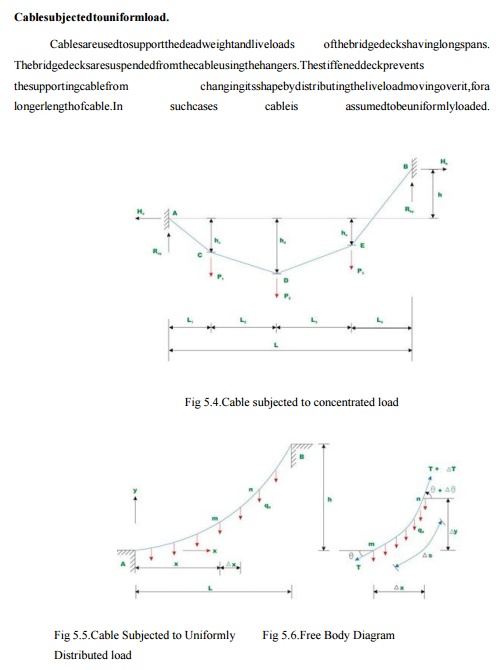 Consider a cable which is uniformly loaded as shown in Fig 5.4. 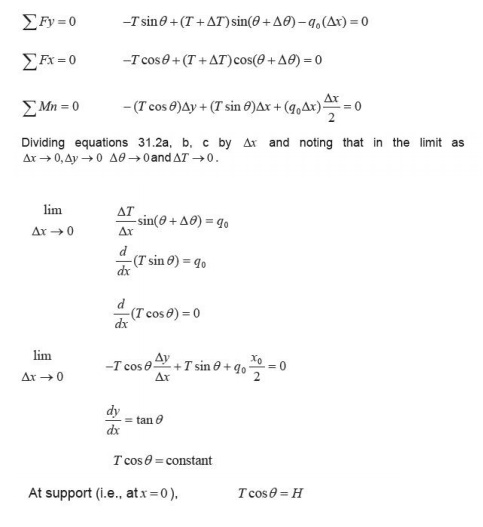 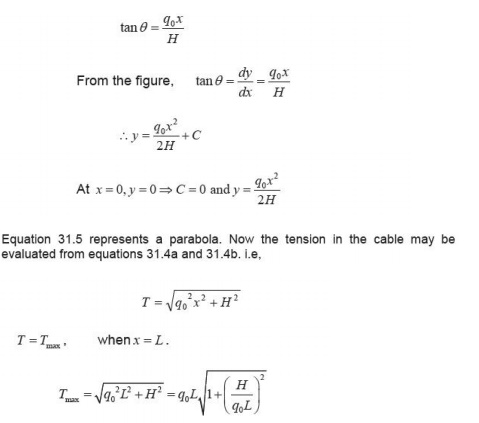 Due to uniformly distributed load, the cable takes a parabolic shape. However due to its own dead weight it takes a shape of acatenary. However dead weight of the cable is neglected in the present analysis.

Determine reaction components at A and B, tension in the cable and the sag of the cable shown inFig.5.7. Neglect the self weight of the cable in the analysis. 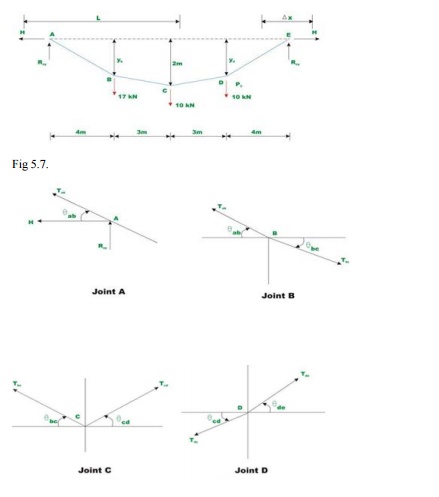 Since there are no horizontal loads, horizontal reactions at A and B should be the same. Taking moment about E, yields 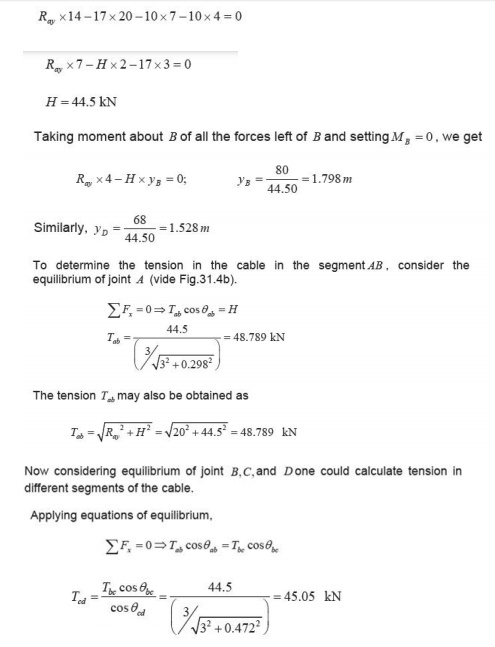 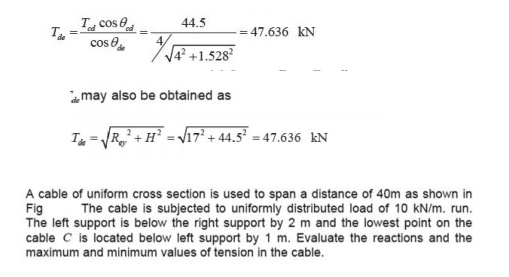 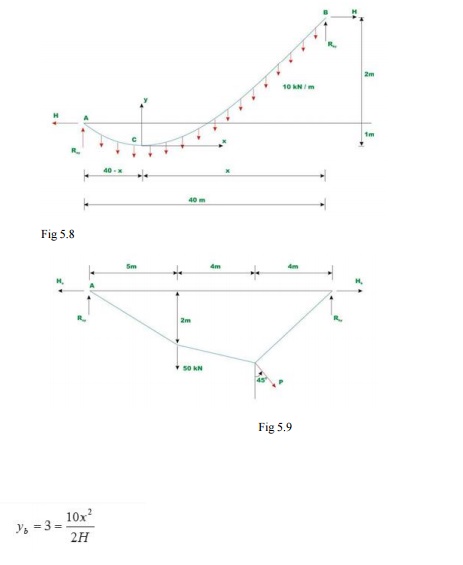 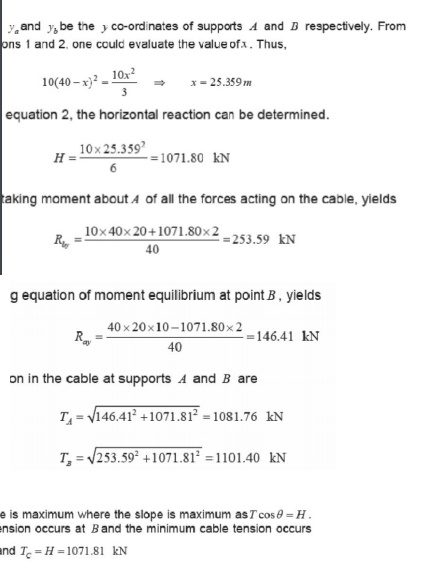 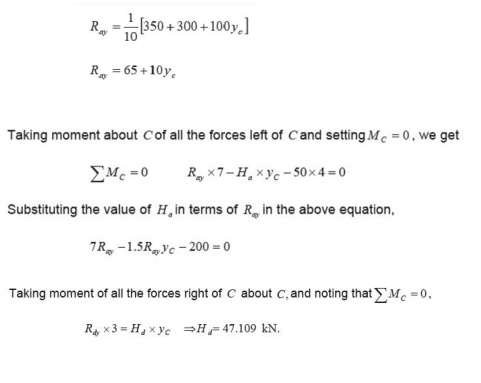 1. What are cable structures?

2. What is the true shape of cable structures?

Cable structures especially the cable of a suspension bridge is in the form of a catenary. Catenary is the shape assumed by astring/cable freely suspended between two points.

3. What is the nature of force in the cables?

Cables of cable structures have only tension and no compression or bending.

Catenary is the shape taken up by a cable or rope freely suspended between two supports and under its own self weight.

Cable structures are mainly of two types: (a) Cable over a guide pulley (b)Cable over a saddle

Cable over a guide pulley has the following properties:

·       The supporting tower will be subjected to vertical pressure and bending due to net horizontal cable tension.

Cable over saddle has the following properties:

·        The supporting tower will be subjected to only vertical pressure due to cable tension.

8. What is the degree of indeterminacy of a suspension bridge with two hinged

The two hinged stiffening girder has one degree of indeterminacy.

9. What are the main functions of stiffening girders in suspension bridges?

Stiffening girders have the following functions.

·They help in keeping the cables in shape

·They resist part of shear force and bending moment due to live loads.

The tension coefficient for a member of a truss is defined as the pull or tension in the member divided by its length, i. e. the force in the member per unit length.

Curved beams are found in the following structures.

Beams in a bridge negotiating a curve

Beams curved in plan will have the following forces developed in them:

14.            What are the significant features of circular beams on equally spaced supports?

·       Torsional moment on every support will be zero

Equivalent UDL on a girder is given by We:

17.            Give the horizontal and vertical components of a cable structure subjected to UDL.

18. Give the expression for determining the tension T in the cable.

The tension developed in the cable is given by

Cables can be of mild steel, high strength steel, stainless steel, or polyest er fibres. Structural cables are made of a series of small strandstwistedor bound together to form a much larger cable. Steel cables are either spiral strand, where circular rodsaretwisted together or locked coil strand, where individual interlocking steel strands form the cable (often with aspiral strand core).

Spiral strand is slightly weaker than locked coil strand. Steel spiral strand cables have a Young's modulus, Eof150 ± 10kN/mm˛ and come in sizes from 3 to 90 mm diameter. Spiral strand suffers from construction stretch, where the strands compact when the cable is loaded.