Some common reaction patterns and drugs which can cause them

Drug eruptions Presentation: Some common reaction patterns and drugs which can cause them

Some common reaction patterns and drugs which can cause them 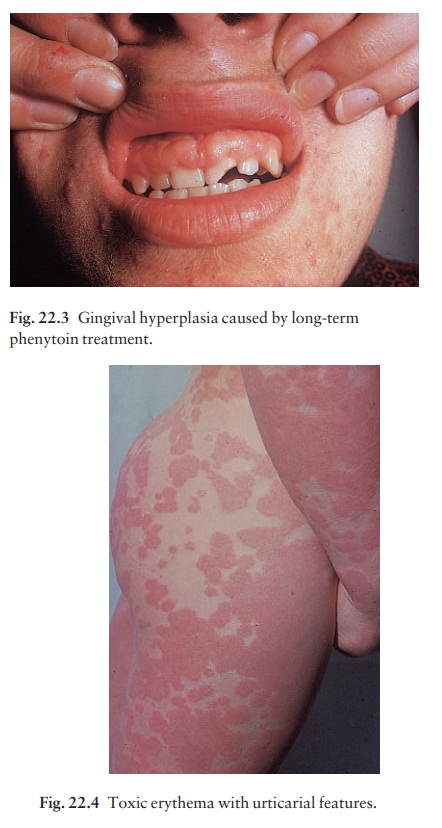 Many drugs may cause this but salicylates are the most common, often working non-immunologically as histamine releasers. Antibiotics are also often to blame. Insect repellents and nitrogen mustards can cause urticaria on contact. Urticaria may be part of a severe and generalized reaction (anaphylaxis) that includes bronchospasm and collapse (Fig. 22.5). 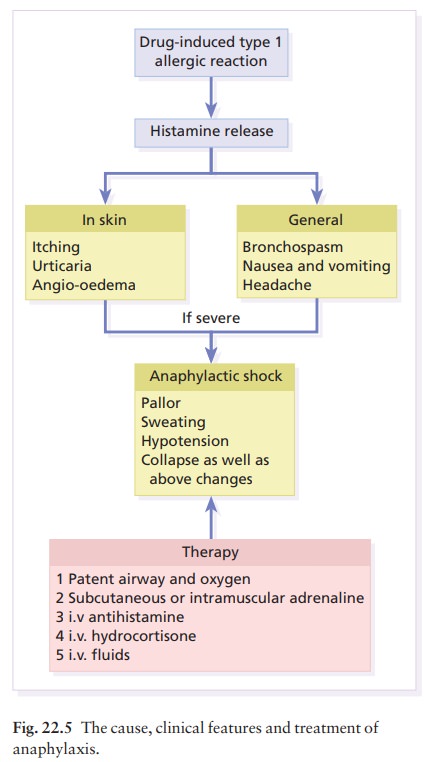 The clinical changes range from urticarial papules, through palpable purpura, to necrotic ulcers. Erythema nodosum may occur. Sulphonamides, phenylbutazone,indomethacin (indometacin), phenytoin and oral con-traceptives are among the possible causes.

Target-like lesions appear mainly on the extensor aspects of the limbs, and bullae may form. In the Stevens–Johnson syndrome, the patients are often ill and the mucous membranes are severely affected. Sulphonamides, barbiturates, lamotrigine and phenyl-butazone are known offenders.

The clinical features are seldom distinctive apart from the itchy brown petechial rash on dependent areas that is characteristic of carbromal reactions. Thrombocytopenia and coagulation defects should be excluded . Thiazides, sulphonamides, phenylbutazone, sulphonylureas, barbiturates and quinine are among the drugs reported to cause purpura.

Some of the reactions noted above can become bullous. Bullae may also develop at pressure sites in drug-induced coma.

This is not a common pattern and occurs mainly when patients sensitized by topical applications are given the drug systemically. Penicillin, sulphonamides, neo-mycin, phenothiazines and local anaesthetics should be considered.

The entire skin surface becomes red and scaly. This can be caused by drugs (particularly phenylbutazone, PAS, isoniazid and gold), but can also be caused by widespread psoriasis and eczema.

Round, erythematous or purple, and sometimes bullous plaques recur at the same site each time the drug is taken (Fig. 22.6). 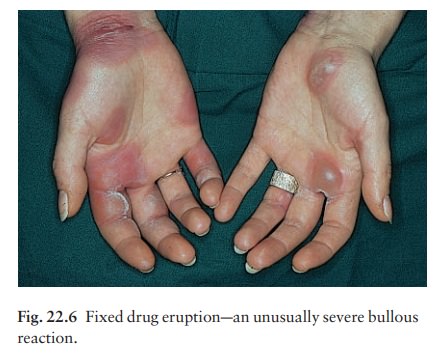 Pigmentation persists between acute episodes. The glans penis seems to be a favoured site. The causes of fixed drug eruptions in any country follow the local patterns of drug usage there; but these change as old drugs drop out of use and are replaced by new ones with an unknown potential for causing this type of reaction. For example, in the UK, three of the four most common causes of fixed drug eruptions in 1970 (barbiturates, phenolphthalein and oxyphen-butazone) are no longer common causes. Paracetamol is currently the most common offender in the UK; trimethoprim-sulfa leads the list in the USA. Non-steroidal anti-inflammatory drugs (NSAIDs; includ-ing aspirin), antibiotics, systemic antifungal agents and psychotropic drugs lie high on the list of other possible offenders.

These resemble lichen planus , but not always very closely as mouth lesions are uncommon and as scaling and eczematous elements may be seen. Consider antimalarials, NSAIDs, gold, phenothiazines and PAS.

This is a predictable side-effect of acitretin and cytotoxic agents, an unpredictable response to some anticoagulants, and sometimes seen with antithyroid drugs. Diffuse hair loss may occur during, or just after, the use of an oral contraceptive.

This is a dose-dependent effect of diazoxide, minoxidil and cyclosporin A. 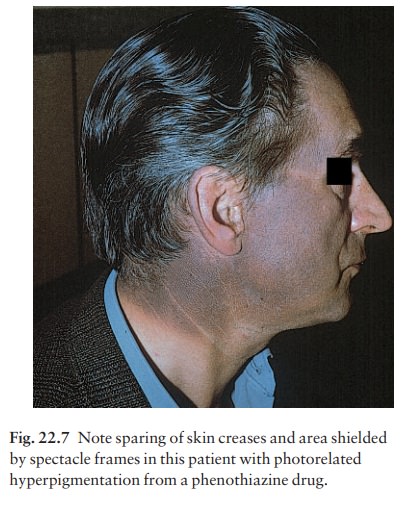 The skin can become rough and scaly in patients receiving oral retinoids, nicotinic acid or lithium.

Psoriasis and acne are good examples of this. Psoriasis may be made worse by giving β-blockers, antimalarials, terbinafine or lithium. Glucocorticoids, progesterone, androgens, anticonvulsants, bromides, iodidies and lithium may exacerbate acne.