Home | | Human Neuroanatomy(Fundamental and Clinical) | Some Recent Developments about the Autonomic Nervous System
Posted On :  23.07.2017 11:56 pm

Some Recent Developments about the Autonomic Nervous System

In the preceding sessions the autonomic nervous system has been described in keeping with traditional teaching. Recent investigations have revealed many additional features of interest that are briefly considered below.

Some Recent Developments about the Autonomic Nervous System

In the preceding sessions the autonomic nervous system has been described in keeping with traditional teaching. Recent investigations have revealed many additional features of interest that are briefly considered below.

Although the presence of nerve plexuses in the wall of the gut, containing neuron somata in addition to nerve fibres, has been well known, their function has been obscure. Recent researches using immunochemical methods have revealed the presence of a large number of neuroactive substances in these plexuses. It has even been claimed that almost every neuroactive substance tobe found in the CNS is also present in relation to the gut, suggesting much greater complexity of function of enteric plexuses than hitherto believed. The nerve plexuses of the gut are, therefore, now regarded as a third component of the autonomic nervous system (the other two components being sympathetic and parasym-pathetic) which is referred to as the enteric nervous system.

Some autonomic neurons are neither adrenergic or cholinergic, and are described as “non-adrenergic, non-cholinergic” (NANC). The neuro-transmitter in these cells is probably ATP (adenosine triphosphate, which is a purine). Hence the neurons aresometimes referred to as purigenic. Such fibres have been demonstrated in the gut wall, walls of blood vessels, urogenital tract, and also within the CNS. The neurons mainly terminate in relation to smooth muscle causing relaxation. They appear to be under control of sympathetic preganglionic neurons.

In addition to transmitters autonomic neurons may also contain neuromodulators. Autonomic neurons are classified into several types depending on their “chemical coding”. Some examples are given in Fig. 19.15. 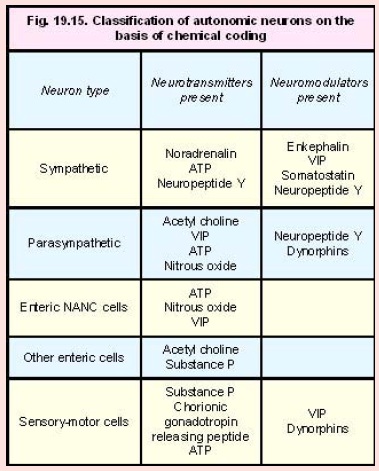 It has been observed that many “afferent” autonomic neurons release neuroactive substances at their peripheral terminals. Such fibres are now referred to as sensory-motor neurons. The substances released are responsible for vasodilatation resulting from an axon reflex.

The neurotransmitters known to be released include substance P, ATP and chorionic gonadotropin releasing peptide (CGRP). Apart from vasodilatation the release of these substances can lead to alterations in contractility of smooth muscle. Effects on mast cells, leucocytes, and other cells are also described. Such nerves are believed to play an important role in the cardiovascular and gastrointestinal systems, and in the bronchial passages.