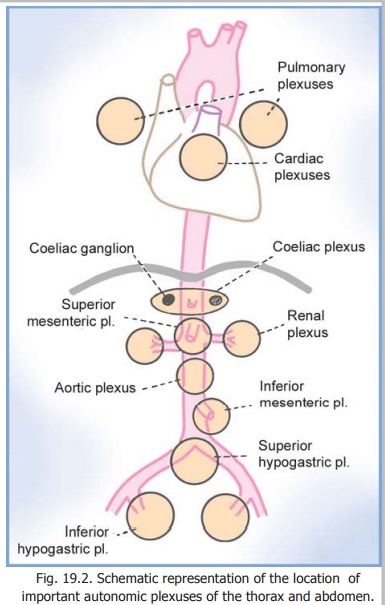 It has been mentioned above that visceral branches of sympathetic trunks help to form various plexuses in the thorax, the abdomen and the pelvis.

It has been mentioned above that visceral branches of sympathetic trunks help to form various plexuses in the thorax, the abdomen and the pelvis. In addition to sympathetic fibres these plexuses contain parasympathetic fibres derived either from the vagus nerve, or from pelvic splanchnic nerves . They also contain collections of neurons which are often referred to as ganglia. In the thorax there are the superficial anddeep cardiac plexuses in relation to theheart, and the pulmonary plexuses in relation to the lungs (Fig. 19.2). In the abdomen there is a prominent coeliacganglion on either side of the aorta. Thetwo ganglia are interconnected by numerous fibres that form the coeliacplexus. This plexus is closely related tothe coeliac trunk and sends ramifications along its branches. Other plexuses (or ganglia) are related to the abdominal aorta, to the superior mesenteric and inferior mesenteric arteries, and to other branches arising from the aorta. The pelvis has a superior hypogastric plexus (often called the presacral nerve) situated near the bifurcation of the aorta. When traced downwards, it divides into two inferior hypogastric plexuses (or hypogastric nerves) related to eachinternal iliac artery. Subsidiary plexuses run along branches of the internal iliac artery. Some plexuses are present in close relation to some viscera or even within their walls. The vesical plexus surrounds the urinary bladder. In the gut there is amyentericplexus (of Auerbach) between themuscle coats; and a submucosal plexus (of Meissner). 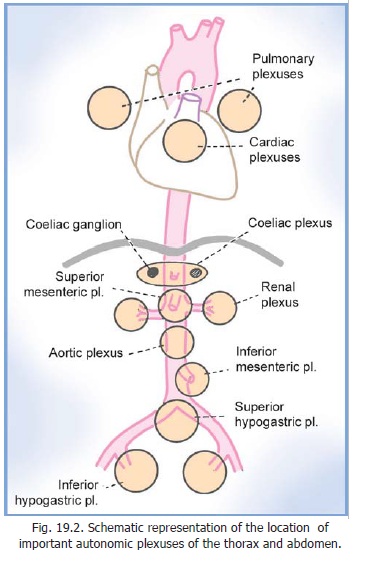