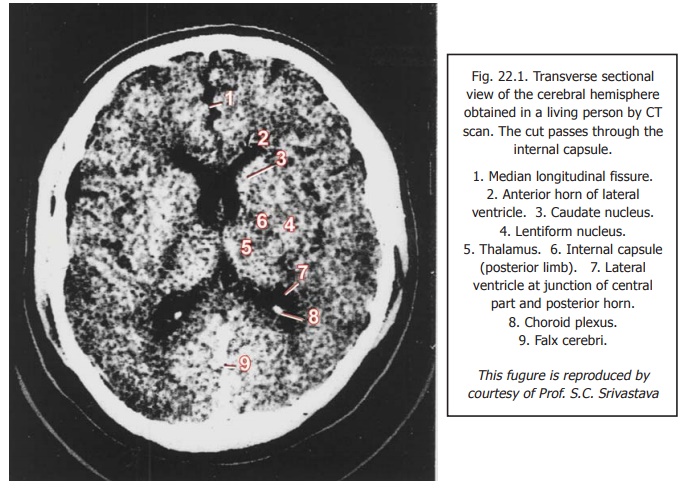 Diagnosis of the site, and nature, of disease depends on an analysis of the total picture presented by the patient.

Diagnosis of the site, and nature, of disease depends on an analysis of the total picture presented by the patient. It is here that knowledge of neuroanatomy becomes important. It is this knowledge that enables the physician to pinpoint the region, involvement of which could explain the various manifestations observed.

In some cases considerable help in localisation of lesions and in diagnosis of their nature, may be obtained by the use of certain investigative procedures that are briefly mentioned below.

1)             Plain radiographs of the skull may give evidence of disease when the skull bones are affected, or when there are areas of calcification.

4)             The vascular system of the brain can be visualised by injecting radio-opaque material into the common carotid or vertebral arteries (Cerebral angiography). Radiographs taken immediately after the injection reveal the arterial pattern. The capillary and venous patterns can be seen after brief intervals.

5)             The spinal subarachnoid space can be visualised by injecting radio-opaque material (myelography).

Abnormal appearances seen with the procedures mentioned above help in determining the nature and location of tumours or other masses present in relation to the brain or spinal cord.

The term tomography has been applied to radiological methods in which tissues lying in a particular plane are visualised.

In recent years a technique has been developed in which a series of levels studied in this way are analysed using computers. Such analysis provides images giving a remarkable degree of detail (Fig. 22.1). The procedure is called computed tomography or CT scan. 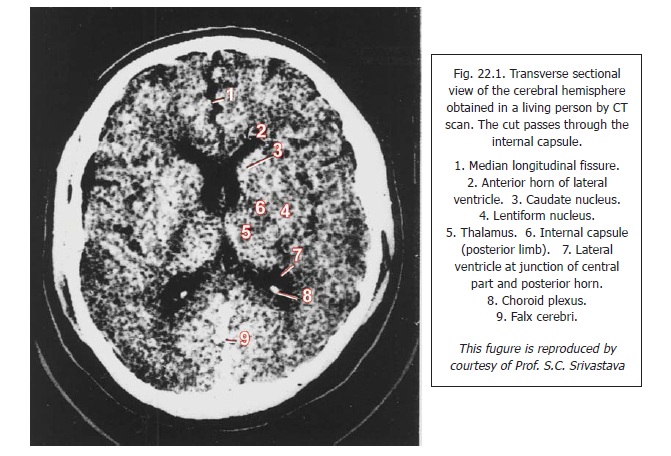 The technique has revolutionised neurological diagnosis, and has rendered many older techniques obsolete. Tumours, areas of haemorrhage, and various other lesions can be identified with confidence.

In Fig. 22.1 note that the overall appearance is similar to that of a radiograph, as the most radio-opaque structures (eg., bones) appear white; the most radio-lucent structures (e.g., air filled cavities) appear black; and other tissues show shades of grey. Also note the distinctive granular appearance of normal brain tissue. Large masses of grey matter (e.g., the thalamus) appear somewhat lighter in colour than surrounding matter and can, therefore, be distinguished. The appearances that are characteristic of normal tissue are altered by disease. 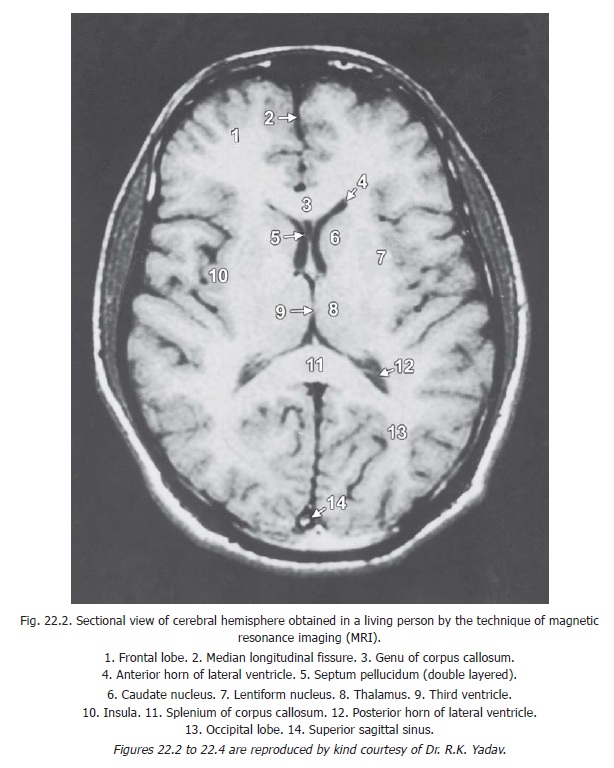 This is a complex technique in which radio-active materials, strong magnetic fields, and radio pulses are used to create images of outstanding clarity (Figs 22.2 to 22.4)). The images are distinctly superior to those of CT scans. The technique is specially useful for demonstrating normal and abnormal tissues, particularly in the posterior cranial fossa and in the vertebral canal. 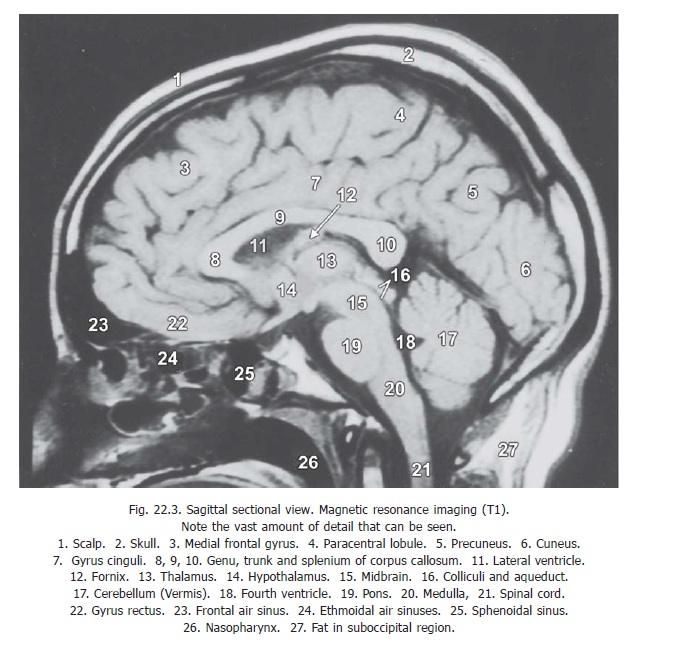 Using MRI, sectional appearances in sagittal, coronal and transverse planes can be obtained. The ability to image structures in multiple planes makes spatial localisation and differentiation of lesions more accurate. Sagittal sections (Fig. 22.3) are particularly useful in demonstrating the brainstem and spinal cord, without overlying bone artefacts. Coronal sections provide a good display of the cerebral and cerebellar hemispheres; and brainstem displacement can be seen when present.

In additional to sectional images in different planes three dimensional pictures can also be produced (by combining information from a series of sectional views).

The main advantages of MRI are high contrast, good soft tissue discrimination, absence of bone and metal artefacts, and the use of non-ionizing radiation. MRI is a powerful diagnostic tool, and it can detect the majority of intracranial lesions.

However, like all other techniques, MRI has its limitations. These are high cost, long time required for collecting data, and the fact that the patient being investigated has to be confined within a tube for a prolonged period (during which there can be difficulty in monitoring a critically ill patient). The machine is very noisy. Very fat persons or those with metallic implants or pacemakers cannot be subjected to this technique. 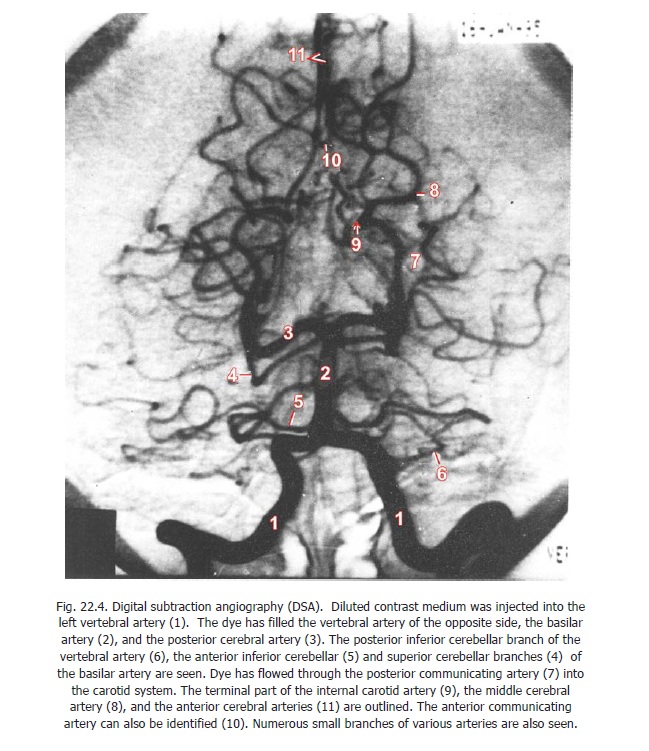 Modifications of the standard MRI techniques can used to obtain images of selected tissues only. Large blood vessels can be demonstrated without injecting contrast media into them. Blood flow through vessels can also be measured. Three dimensional images of intracranial arteries can also be obtained. However, MR angiography is not an acceptable substitute for conventional angiography for imaging of small blood vessels; and in patients with suspected subarachnoid haemorrhage, or aneurysms.

This is a computerised technique in which blood vessels can be imaged using very low concentrations of contrast media (thus reducing chances of adverse effects that sometimes occur in conventional angiography). Bones and other tissues are removed from the image (by the computer through a technique called digital substraction) revealing blood vessels clearly (Fig. 22.4).

There are two variations of DSA, one using intravenous injection of contrast medium, and the other in which the medium is injected directly into arteries.

Intravenous DSA is easy to perform, there being no need for anaesthesia. Discomfort to the patient is minimal. However, resolution of the images obtained is not very good. As dye reaches all intracranial arteries simultaneously, there is overlapping of vessels of the right and left sides resulting in confusion.

In arterial DSA a small quantity of much diluted contrast medium is injected directly into the selected artery. Images of excellent quality are obtained (Fig. 22.4). The recording and playback facilities provided by DSA equipment considerably shorten the time required for the procedure.

Ultrasound waves applied to any part of the body are reflected back by various structures. The reflected waves (or echo) can be picked up and visualised on a screen. Images of internal organs can be obtained in this way. In the field of neurology ultrasound waves can be used to detect a shift of midline structures e.g., the falx cerebri.

The technique is called echoencephalography.

Various other scanning methods using radioactive isotopes are being introduced. If solutions containing a radioactive isotope of xenon are injected into the common carotid artery, radiations can be picked up using a gamma camera. Using this method it is possible to determine the blood flow through different parts of the brain; and to see the changes that take place during various kinds of activity. For example, if a hand is moved while such pictures are being taken the ‘hand area’ of the motor cortex shows increased blood flow.

In this technique positron emitting isotopes (radionucleides including 15O, 11C and 18F) are used. The technique allows measurement of blood flow through specific areas of brain tissue. Using this method it is possible to determine areas of brain that are ‘active’ when performing a particular action. PET is a technique for functional rather than structural imaging. It can be combined with MRI for accurate localisation of areas involved. PET can also be used to measure oxygen uptake, or glucose utilisation. Regions containing specific neuropeptides can be recognised.

1)             Information about the functioning of the brain can be obtained by a study of the patterns of electrical activity within it. Electrodes are applied over the scalp at various points. These are connected to a machine which records the electrical potentials. The procedure is called electroencephalography or EEG).

2)             Electrical activity precedes or accompanies muscle contraction. This can be recorded by suitable machines. The procedure is called electromyography or EMG. It is employed for the study of various disorders of skeletal muscle. It is also a valuable tool for investigating the normal actions of muscles.

3)             The rate of conduction in nerve fibres can also be measured by electrical methods.

4)             One of the standard methods of neurophysiological investigation has been to stimulate a particular part of the nervous system and to record evoked potentials from other regions. Most such experiments have been done on animals after exposing the regions concerned. Sophisticated instruments are now available that enable similar studies to be done in human subjects through surface electrodes. Using such methods it is possible to determine the integrity (or otherwise) of various pathways.

The brief review of techniques given above will show that the study of neurology is a rapidly advancing science. With advances in instrumentation it is inevitable that our concepts of structure, function, and disease in the nervous system will undergo many modifications. Any student would be well advised, therefore, to keep a very open mind receptive to new ideas and concepts.