Calculate the central deflection and the slope at ends of a simply supported beam carrying  a UDL w/ unit length over the whole span.

Since no point load is acting at the center where the deflection is required, apply the  fictitious load W, then the reaction at A and

Consider a section at a distance x from A. 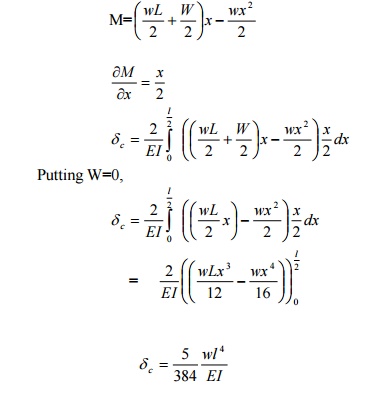 b) Slope at ends

To obtain the slope at the end A, say apply a frictions moment A as shown in fig. The reactions at A and B will be

Where Mx is the moment at a point distant x from the origin (ie, B) is a function of M. 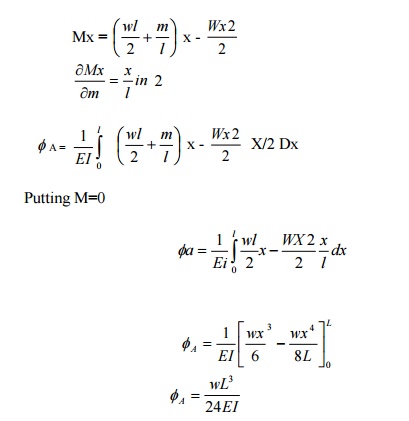 A beam AB of span 3mis fixed at both the ends and carries a point load of 9 KN at C distant 1m  from A. The M.O.I. of the portion AC of the beam is 2I and that of portion CB is I. calculate the  fixed end moments and reactions.

There are four unknowns Ma, Ra, Mb and Rb.Only two equations of static are available  (ie) ĺv =0 and ĺM =0

This problem is of second degree indeterminacy.

Taking A as the origin 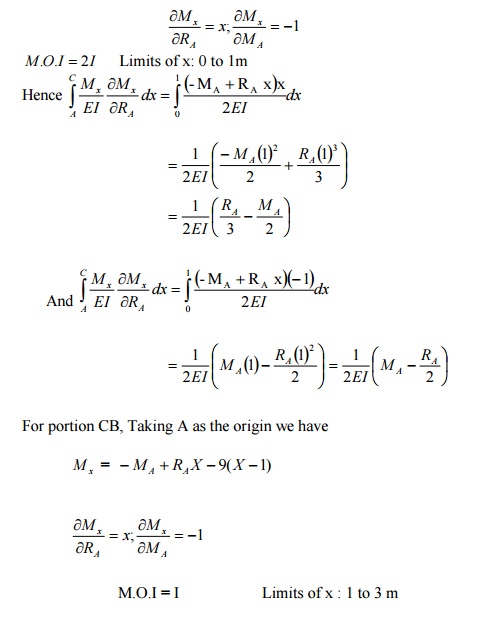 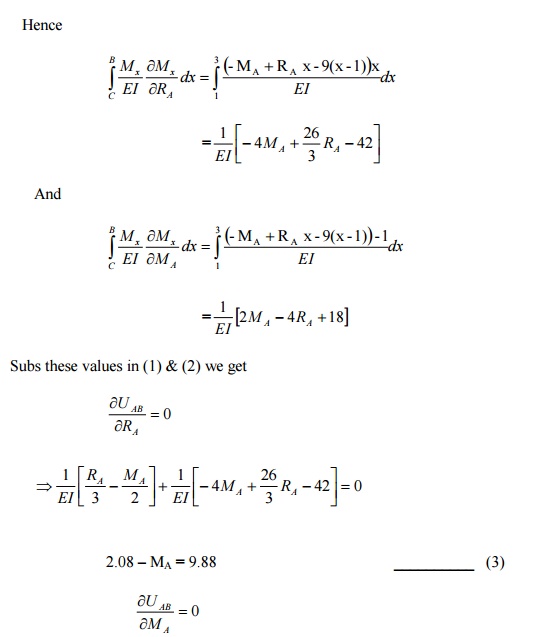 To find MB, take moments at B, and apply the condition ĺM =0 there. Taking clockwise  moment as positive and anticlockwise moment as negative. Taking MB clockwise, we have

To find RB Apply  ĺV =0 for the whole frame. 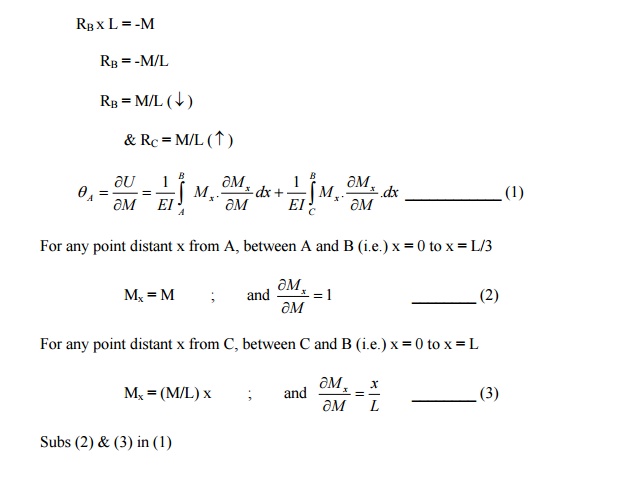 b) Deflection of A:

To find the deflection at A, apply a fictitious load W at A, in upward direction as 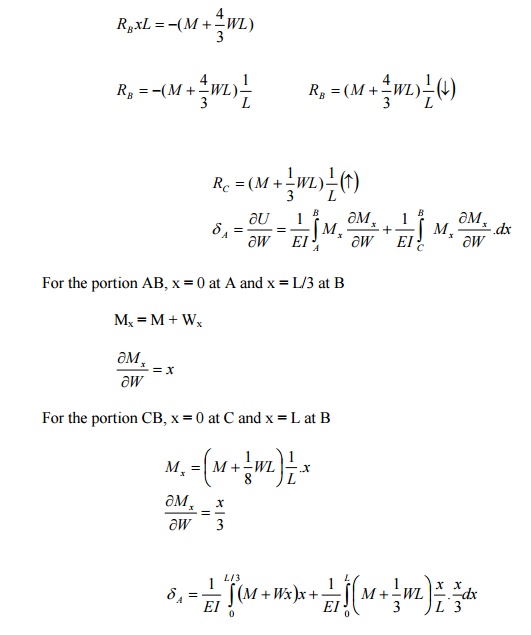 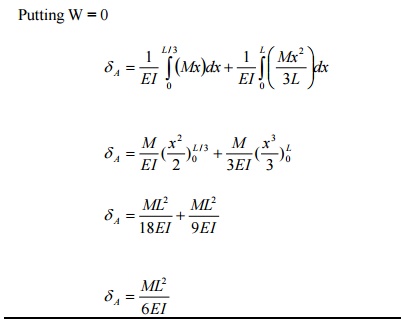 Determine the vertical and horizontal displacements of the point C of the pin-jointed frame  shown in fig. The cross sectional area of AB is 100 sqmm and of AC and BC 150 mm2 each.  E= 2 x 10 5 N/mm2. (By unit load method) 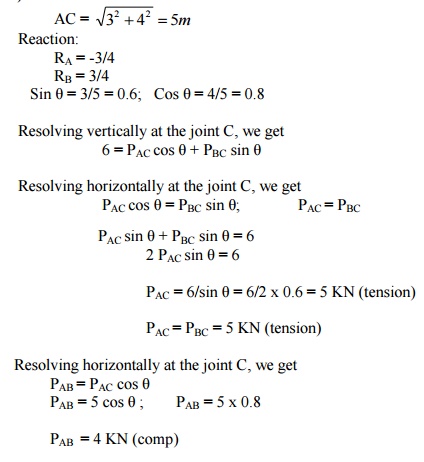 B) Stresses due to unit vertical load at C:

Apply unit vertical load at C. The Stresses in each member will be 1/6 than of those  obtained due to external load.

C) Stresses due to unit horizontal load at C:

Assume the horizontal load towards left as shown in fig. 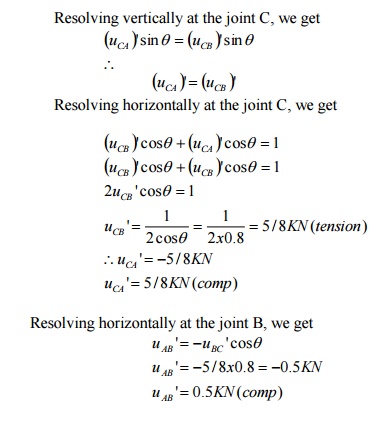 The frame shown in fig. Consists of four panels each 25m wide, and the cross sectional  areas of the member are such that, when the frame carries equal loads at the panel points  of the lower chord, the stress in all the tension members is f n/mm2 and the stress in all the  comparison members of 0.8 f N/mm2.Determine the values of f if the ratio of the maximum  deflection to span is 1/900 Take E= 2.0 x 105 N/mm2. 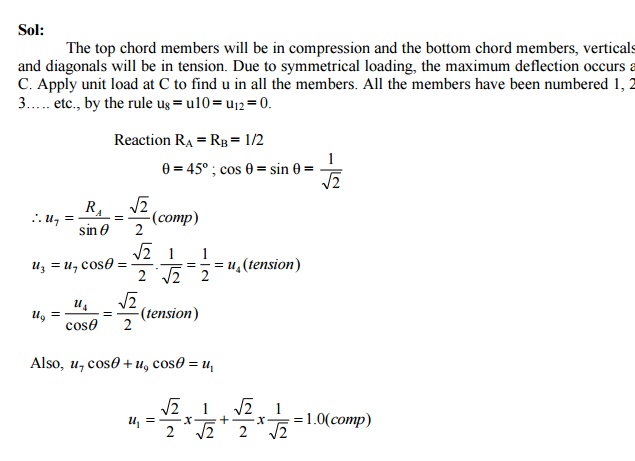 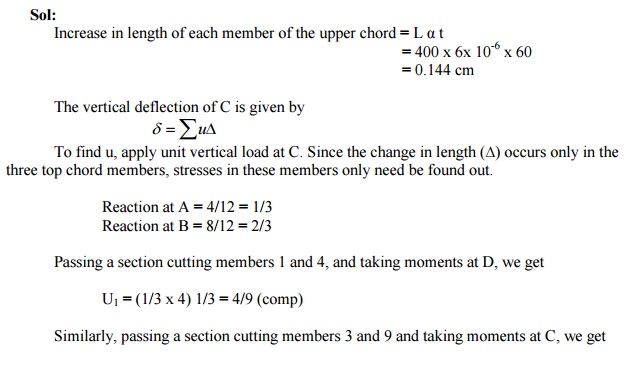 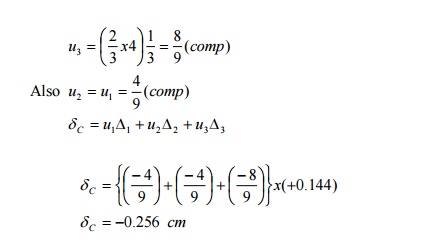 Using the principle of least work, analyze the portal frame shown in Fig. Also plot the

\ The structure is statically indeterminate to first degree. Let us treat the horizontal H ( ¬) at A  as redundant. The horizontal reaction at D will evidently be = (3-H) ( ¬). By taking moments at  D, we get

By the theorem of minimum strain energy,

Taking A as the origin. 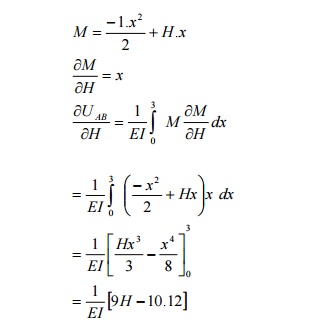 Taking B as the origin. 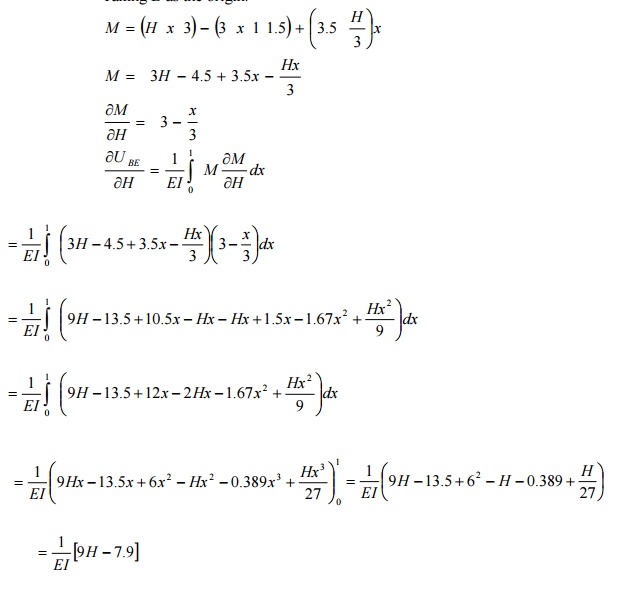 Taking C as the origin 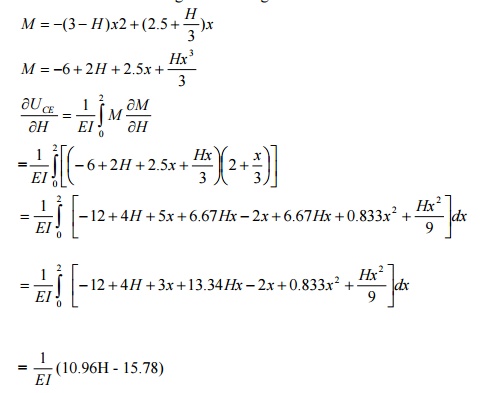 Taking D as the origin 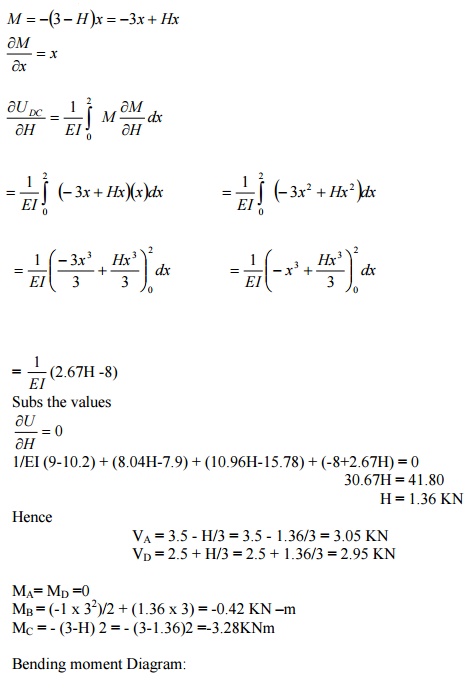 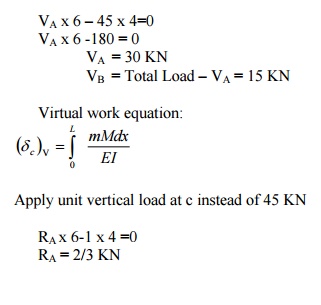 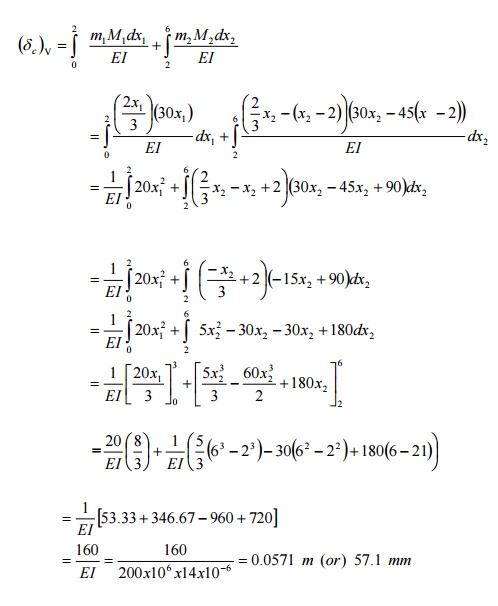 Maxwell?s theorem of reciprocal deflection  has the following three versions:

M= bending moment at any point x due to external load.

m= bending moment at any point x due to unit load applied at the point where  deflection is required.

Let mXB = bending moment at any point x due to unit load at B.

When unit load (external load) is applied at A,

When unit load (external load) is applied at B, M=mXB

Apply dummy load W at B. Since we have to determine the deflection of the free end.  Consider a section xx at a distance x from B. Then 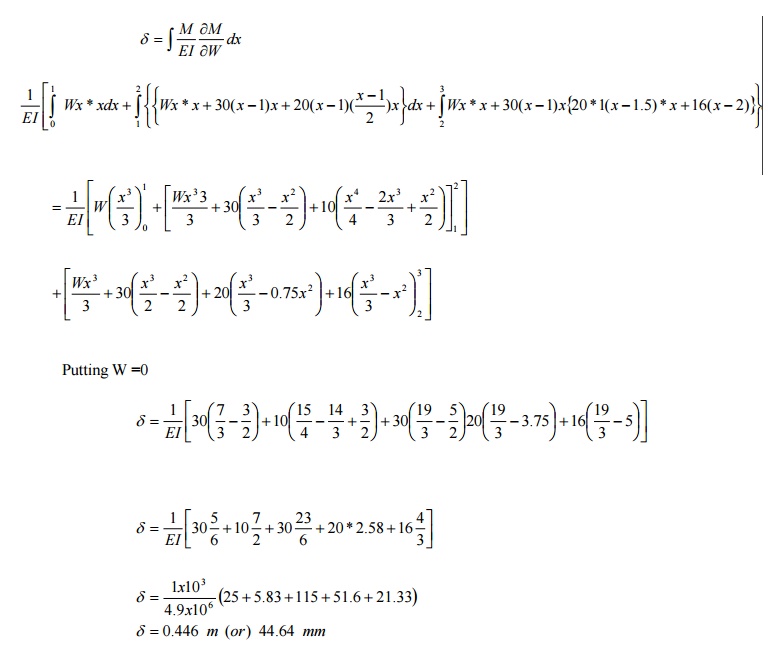 A cantilever, 8m long, carrying a point loads 5 KN at the center and an udl of 2 KN/m for a  length 4m from the end B. If EI is the flexural rigidity of the cantilever find the reaction at  the prop. 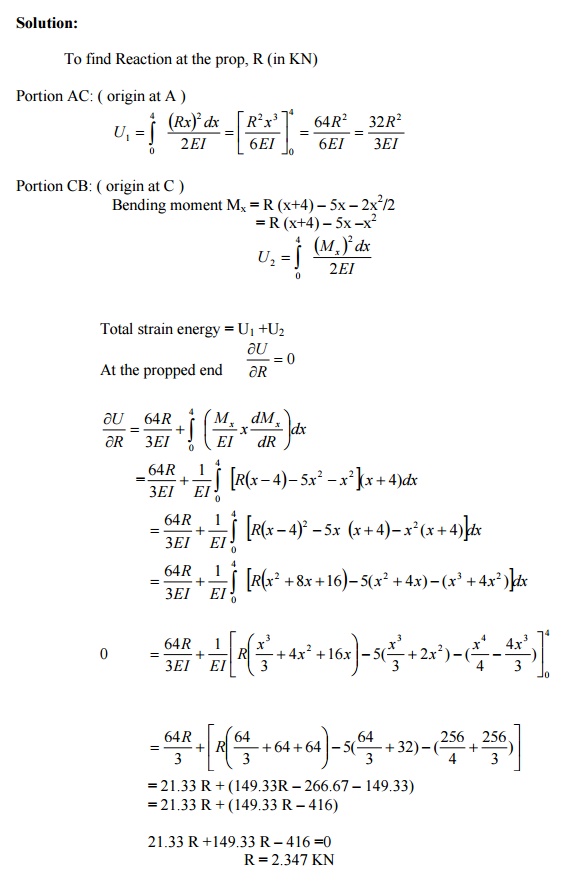 ' A simply supported beam of span L is carrying a concentrated load W at the centre and a uniformly  distributed load of intensity of w per unit leng  the centre of the beam.

Let the load W is applied first and then the uniformly distributed load w.

Hence work done by W due to w is given by: 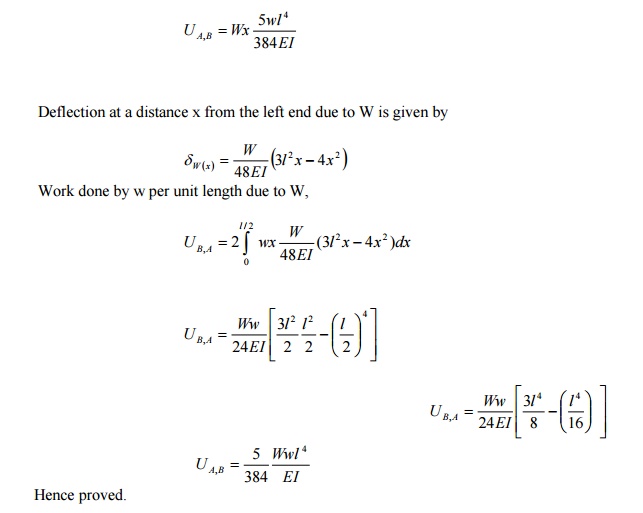