Soil and its Formation

Soil is a mixture of organic matter, minerals, gases, liquids and organisms that together support life. Soil minerals form the basis of soil. It forms on the surface of the earth. It is known as the ‘skin of the earth’.

Soil and its Formation 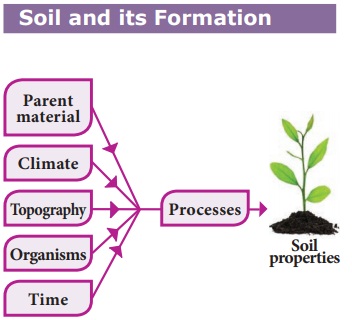 Soil is a mixture of organic matter, minerals, gases, liquids and organisms that together support life. Soil minerals form the basis of soil. It forms on the surface of the earth. It is known as the ‘skin of the earth’. Soils are formed from rocks (parent material) through the processes of weathering and natural erosion. Water, wind, temperature change, gravity, chemical interaction, living organisms and pressure differences all help break down parent material. It leads to the formation of loose material. In course of time, they further break down into fine particles. This process release the minerals locked in the rock fragments. Later on, the vegetative cover which develop in that region forms humus content in the soil. This way the soil gets matured gradually.

World Soil Day is observed on 5th December, every year

The basic components of soil are mineral, organic matter, water and air. It consists of about 45% mineral, 5% organic matter, 25% of water and 25% air. It is only a generalized fact. The composition of soil varies from place to place and time to time. 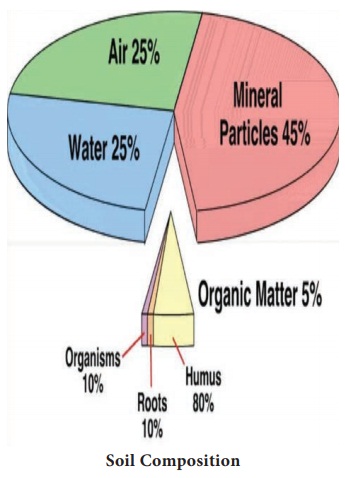 The soil profile is defined as the vertical section of the soil from the ground surface and extends downwards.

Collect sample of soils from your place and exhibit in the class room.

Soils are classified on the basis of their formation, colour, physical and chemical properties. Based on these, soil is classified into six major types. They are: Alluvial soil, Black soil, Red soil, Laterite soil, Mountain soil, Desert soil

These soils are found in the regions of river valleys, flood plains and coastal regions. These are formed by the deposition of silt by the running water. It is the most productive of all soils. It is suitable for the culitivation of sugarcane, jute, rice, wheat and other food crops.

These soils are formed by weathering of igneous rocks. Black soil is clayey in nature. It is retensive of moisture. It is ideal for growing cotton.

These soils are formed by weathering of metamorphic rocks and crystalline rocks. The presence of iron oxide makes this soil brown to red in colour. It is usually found in semi-arid regions. It is not a fertile soil. It is suitable for millet cultivation.

These are the typical soils of tropical regions. These soils are found in the regions which experienced alternate wet and dry condition. As these soils are formed by the process of leaching, it is in fertile. It is suitable for plantation crops like tea and coffee.

These soils are found over the slopes of mountain. Soils in these regions are thin and acidic. However characteristic of soil differs from region to region based on the altitude.

These are sandy soil found in the hot desert regions. These soils are porous and saline. Since it is infertile agriculture in these soils are not so successful. 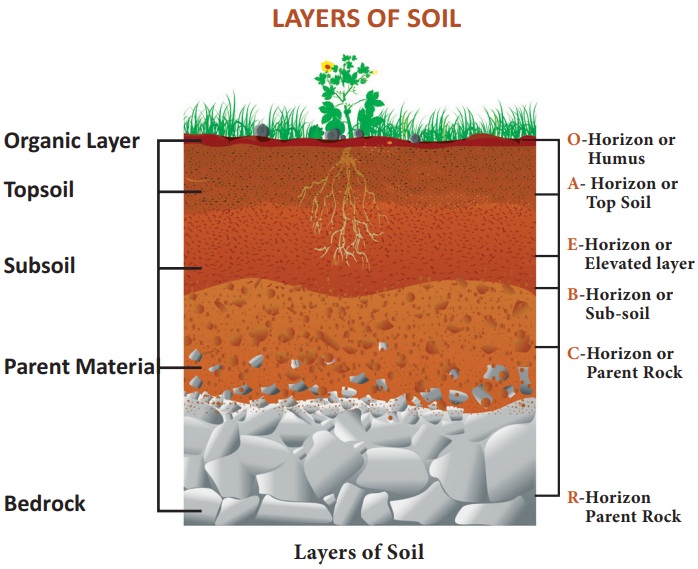 O-Horizon or Humus: This layer is dominated by organic material (leaves, needles, twigs, moss and lichens).

A-Horizon or Top Soil: It is a part of top soil, composed of organic matter mixed wit mineral matter.

E- Horizon or Elevated layer: E-Stands for elevated layer. This layer is significantly leached of clay, iron, and aluminum oxides, which leaves a concentration of ore

B-Horizon or Sub-soil: This layer reflects the chemical or physical alteration of parent material. Thus iron, clay, aluminum and organic compounds are found accumulated in this horizon.

How long does it take to form soil?

The time needed to form a soil depends on the Climate. The environments which is characterized by mild climate, takes 200-400 years to form one cm of soil and in wet tropical area, soil formation is faster and takes upto 200 years. To become a well matured soil, it takes about 3000 years.

* Soil is one of the important natural resource. It is a basic requirement for plant growth and supports various life forms on the earth.

* The minerals present in the soil enhance and nourishes the crops and plants.

* It is used in making of ceramics or pottery.

* It is a source of material for construction and handicraft works.

* It acts as natural filter of water and purifies it.

Rocks and soils are the important renewable natural resources. Both of them play an important role in everyday life of human beings as well as economic development. Nowadays rock-based companies are in increase which provide employment to a sizeable population. Soils attract human settlement and other economic activities. As India is an agricultural country, the proper management of soil resource will lead to sustainable food production besides its use for various other purposes. So, the soil resources must be conserved.