According to the mode of formation the rocks are classified into three types as follows. 1. Igneous Rocks 2. Sedimentary Rocks and 3. Metamorphic Rocks

The rocks are the solid mineral materials forming a part of the surface of the earth and other similar planets. The earth’s crust (Lithosphere) is composed of rocks. A rock is an aggregate of one or more minerals. Rock is an important natural resource and is found in solid state. It may be hard or soft in nature. An estimation reveals that there are 2,000 different types of minerals found on the earth surface out of which only 8 basic minerals commonly found all over the earth. Minerals are chemical substances which exist in nature. They may occur either in the form of elements or compounds.

According to the mode of formation the rocks are classified into three types as follows. 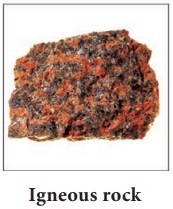 1. These rocks are hard in nature

3. They do not contain fossils

4. They are associated with the volcanic activities

5. These rocks are useful for construction works

Igneous Rocks are of two types. They are:

Can you visualize the lava comes out from a volcano? Lava is actually a fiery red molten magma comes out from the interior of the earth on its surface. After reaching the earth surface the molten materials get solidified and form rocks. Rocks formed in such a way on the crust are called Extrusive igneous rocks. These rocks are fine grained and glassy in nature due to rapid solidification. Basalt found in the north western part of peninsular India is the example for this type of rock. 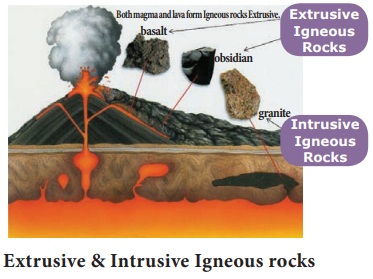 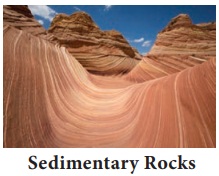 Sedimentary rocks are the important source of natural resources like coal, oil and natural gas.

1. They have many layers.

2. They are non-crystalline rocks.

4. They are soft and get eroded easily 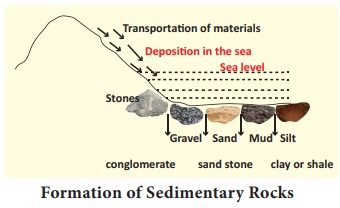 Oldest sedimentary rocks of the world has been identified in Greenland and estimated as 3.9 billion years old.

These rocks are formed as a result of the decomposition of dead plants and animals. It contains fossils. Chalk, Talc, Dolomite and Limestone rocks are of this category.

These rocks are formed due to the disintegration of igneous and metamorphic rocks. The natural agents erode and transport these rocks and deposit them at some places. After a long period of time, they cemented to form rocks. Sandstone, Shale and Clay are the examples of rocks of this type.

These are formed by precipitating of minerals from water. It is formed usually through evaporation of chemical rich solutions. These rocks are also called as evaporates. Gypsum is an example of this kind.

The word Metamorphic is derived from two Greek words “Meta” and “Morpha”, Meta means change and Morpha means shape. When Igneous and sedimentary rocks subject to high temperature and pressure, the original rocks get altered to form a new kind of rock called metamorphic rocks. Metamorphism is of two types. They are

If the change in the rocks is mainly caused by high temperature, the process is called as 'Thermal Metamorphism'.

If the change in the rock is mainly caused by high pressure, the process is called as 'Dynamic Metamorphism'.

One of the world wonders Taj Mahal in India was built with White Marbles a metamorphic rock. 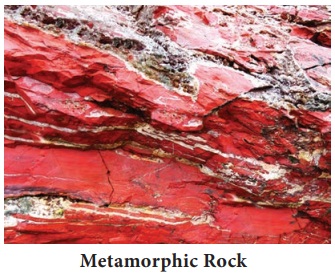 2. They consist of alternate bands of light and dark minerals.