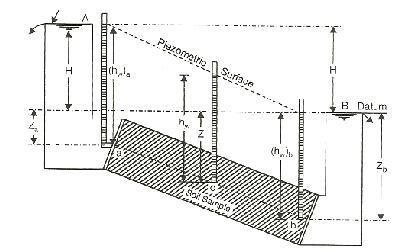 When water flows through a saturated soil mass, the total head at any point in the soil mass Consists of (i) piezometric head or pressure head, (ii) the velocity head, and (iii) the position Head.

elevation head at any point is the elevation of that point with respect to any arbitrary datum. The position head Z is taken positive if it is situated above the datum andnegative if below the datum.

A symbol ? is sometimes used in place of h to represent the hydraulic potential or the potential function. However, when ? represents a product of k and h, it is known as the velocity potential.

The loss of head or the dissipation of the hydraulic head per unit distance of flow through the soil is called the hydraulic gradient i = h/L . By virtue of the viscous friction exerted on water flowing through soil pores, an energy transfer is effected between the water and the soil. The force corresponding to this energy transfer is called the seepage force or seepage pressure. Thus, seepage pressure is the pressure exerted by water on the soil through which it percolates. It is this seepage pressure that is responsible for the phenomenon known as quick sand and is of vital importance in the stability analysis of earth structures subjected to the action of seepage.

1 Importance for the study of seepage of water

Determination of rate of settlement of a saturated compressible soil layer.

Calculation of seepage through the body of earth dams, and stability of slopes.

Calculation of uplift pressure under hydraulic structure and there safety against piping.

Ground water flow towards well and drainage of soil

When flow takes place in an upward direction, the seepage pressure also acts in the upward direction and the effective pressure is reduced. If the seepage pressure becomes equal to the pressure due to submerged weight of the soil, the effective pressure is reduced to zero. In such a case, cohesion less soil loses all its shear strength, and the soil particles have a tendency to move up in the direction of flow. This phenomenon of lifting of soil particles is called quick condition, boiling condition or quick sand. The hydraulic gradient at such a critical state is called the critical hydraulic gradient.

For loose deposits of sand or silt, if voids ratio e is taken as 0.67 and G as 2.67, the critical hydraulic gradient works out to be unity. It should be noted that quick sand is not a type of sand but a flow condition occurring within a cohesion less soil when its effective pressure is reduced to zero due to upward flow of water.