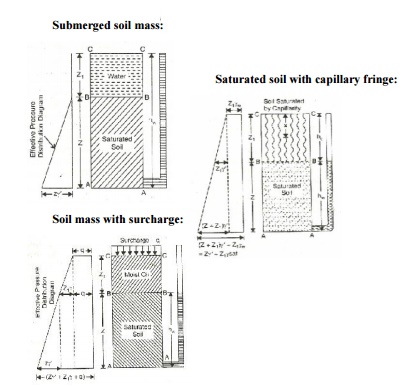 At any plane in a soil mass, the total stress or unit pressure ? is the total load per unit area. This pressure may be due to i) self weight of soil ii) over burden on the soil.

At any plane in a soil mass, the total stress or unit pressure ? is the total load per unit area. This pressure may be due to i) self weight of soil ii) over burden on the soil.

Such a pressure, also termed as inter granular pressure, is effective in decreasing the voids ratio of the soil mass and in mobilizing its shear strength. The neutral pressure or the pore water pressure or pore pressure is the pressure transmitted through the pore fluid.

Therefore, this pressure is also called neutral pressure (u). Since the total vertical pressure at any plane is equal to the sum of the effective pressure and pore water pressure we have,

When the water level in the reservoir is corresponding to the flood level (H.F.L), the portion to the u/s of the dam will be saturated. The water level in the u/s pervious shell will be practically the same as the H.F>L. Due to capillarity, water will rise through a height hc. If the top of the core is situated at a height y< hc above the H.F.L, , the capillary forces ill pull the water in descending part of the earth dam, and will slowly empty it. This process is known as capillary siphoning.

When a solid or hollow tube, wet with water is partly inserted vertically in water, the molecules, due to attraction between the molecules of water and the material, climb the solid surface forming a curved meniscus adjacent to the walls of the tube or rod. 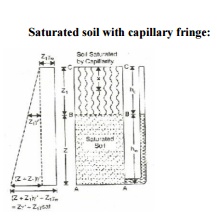 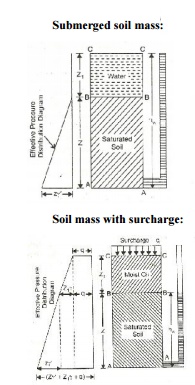 Understand soil swelling and shrinkage mechanisms, and the development of desiccation cracks;

Distinguish between soils having different magnitude of swelling, as well as the consequences on soil structural behaviour; Know methods to characterize soil swell/shrink potential;

As the moisture content of a fixed weight of sand increases, the volume also increases--up to a point. This is known as "bulking".

Bulking of loose, moist sand in the increase in its volume as compared to dry sand. Bulking is a well known phenomenon particularly in the trade of aggregate for proportioning of concrete. This phenomenon has been known since 1892 when it is was investigated by Feret at French school of Bridges and Roads.

Effect of bulking on sand

Bulking of sand in a loose state of packing decreases the bearing capacity of sand considerably. In compacting sandy soils, low densities are usually achieved because of bulking.