Numerous studies have shown that exposure-based treatments are effective for helping patients to overcome a variety of specificphobias .

Numerous studies have shown that exposure-based treatments are effective for helping patients to overcome a variety of specificphobias including fears of blood, injections dentists, spiders, snakes, rats), enclosed places, thunder and lightning, water, flying, heights, choking and balloons. Furthermore, the way in which exposure is conducted may make a difference. Exposure-based treatments can vary on a variety of dimensions including the degree of therapist involvement, duration and intensity of exposure, frequency and number of sessions, and the degree to which the feared situation is confronted in imagination versus in real life. In addition, because individuals with certain specific phobias often report a fear of panicking in the feared situation, investigators have suggested that adding various panic manage-ment strategies (e.g., cognitive restructuring, exposure to feared sensations) may help to increase the efficacy of behavioral treat-ments for specific phobias. It remains to be shown whether the addition of these strategies will improve the efficacy of treat-ments that include only exposure.

Exposure seems to work best when sessions are spaced close together. Secondly, prolonged exposure seems to be more effective than exposure of shorter duration. Thirdly, during ex-posure sessions, patients should be discouraged from engaging in subtle avoidance strategies (e.g., distraction) and over-reliance on safety signals (e.g., being accompanied by one’s spouse during ex-posure). Fourth, real-life exposure is more effective than exposure in imagination. Fifthly, exposure with some degree of therapist involvement seems to be more effective than exposure that is ex-clusively conducted without the therapist present. Exposure may be conducted gradually or quickly. Both approaches seem to work equally well, although patients may be more compliant with a grad-ual approach. Finally, in the case of blood and injection phobias, the technique called applied muscle tension should be considered as an alternative or addition to exposure therapy. Applied muscle tension involves having patients repeatedly tense their muscles, which leads to a temporary increase in blood pressure and pre-vents fainting upon exposure to blood or medical procedures.

Specific phobias are among the most treatable of the anxi-ety disorders. For example, in as little as one session of guided exposure lasting 2 to 3 hours, the majority of individuals with animal or injection phobias are judged much improved or com-pletely recovered. A recent study demonstrated that one session of exposure treatment was effective in the treatment of children and adolescents with various specific phobias and exposure con-ducted with a parent present was equally effective as exposure treatment conducted alone. However, despite how straightfor-ward the concept of exposure may seem, many subtle clinical issues can lead to problems in implementing exposure-based treatments. For example, although a patient might be compliant with therapist-assisted exposure practices, he or she may refuse to attempt exposure practices alone between sessions. In such cases, involving a spouse or other family member as a coach dur-ing practices at home may help. In addition, gradually increasing the distance between therapist and patient during the therapist-assisted exposures will help the patient to feel comfortable when practicing alone. However, to maintain the patient’s trust and to maximize the effectiveness of behavioral interventions, it is im-portant that exposure practices proceed in a predictable way, so that the patient is not surprised by unexpected events. Several self-help books and manuals for treating a range of specific pho-bias have been published in the past decade. Whereas some of these manuals were developed to be used with the assistance of a therapist (Bourne, 1998; Antony et al., 1995; Craske et al., 1997), others were developed for self-administration (Brown, 1996).

Recent developments in technology have started to have an impact on the treatment of specific phobias. Videotapes are com-monly used to show feared stimuli to patients during exposure. Computer administered treatments have also been used. More recent is the use of virtual reality to expose patients to simulated situations that are more difficult to replicate in vivo such as flying (Kahan et al., 2000) and heights (Rothbaum et al., 1995). Emerg-ing data on the effectiveness of virtual reality is encouraging. However, other preliminary studies indicate that in vivo exposure is still superior (Dewis et al., 2001).

Empirically validated psychosocial interventions for social pho-bia have primarily come from a cognitive–behavioral perspec-tive and include four main types of treatment: 1) exposure-based strategies; 2) cognitive therapy; 3) social skills training; and 4) applied relaxation. Exposure-based treatments involve repeat-edly approaching fear-provoking situations until they no longer elicit fear. Through repeated exposure, patients learn that their fearful predictions do not come true despite their having con-fronted the situation. Table 50.4 illustrates an example of an ex-posure hierarchy that might be used to structure a patient’s expo-sure practices. An exposure hierarchy is a list of feared situations that are rank ordered by difficulty and used to guide exposure practices for phobic disorders including social phobia and specific phobia. The patient and therapist generate a list of situations that the patient finds anxiety provoking. Items are placed in descend-ing order from most anxiety provoking to least anxiety provok-ing, and each item is rated with respect to how anxious the patient might be to practice the item. Exposure practices are designed to help the patient become more comfortable engaging in the activi-ties from the hierarchy. Cognitive therapy helps patients identify and change anxious thoughts (e.g., “Others will think I am stupid 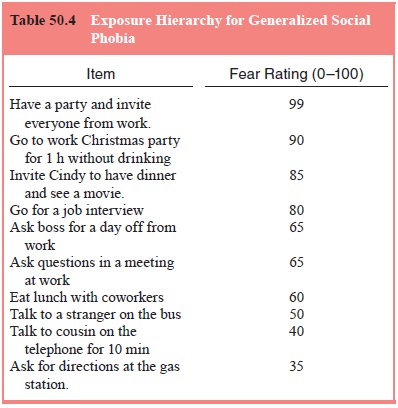 if I participate in a conversation at work”) by teaching them to consider alternative ways of interpreting situations and to exam-ine the evidence for their anxious beliefs. Social skills training is designed to help patients to become more socially competent when they interact with others. Treatment strategies may include modeling, behavioral rehearsal, corrective feedback, social rein-forcement and homework assignments. Finally, applied relaxa-tion involves learning to relax one’s muscles during rest, during movement and eventually in anxiety-provoking social situations.

Although these methods are presented as four distinct treatment approaches, there is often overlap among the various treatments. Social skills training typically requires exposure to the phobic situation so that new skills may be practiced (e.g., behavioral rehearsal). The same may be said of applied relaxa-tion, which includes learning to conduct relaxation exercises in the phobic situation. In fact, most treatments for social phobia involve some type of exposure to anxiety-provoking social inter-actions and performance-related tasks. Furthermore, many cog-nitive–behavioral therapists treat patients using several different strategies delivered in a comprehensive package.

Studies demonstrating the efficacy of CBT for social phobia are too numerous to describe in detail. Several studies have compared various cognitive–behavioral strategies and their combinations for treating social phobia. For example, Wlazlo and colleagues (1990) compared social skills training to ex-posure therapy conducted either individually or in groups. All three treatments led to significant improvements and there were no differences between treatments. However, exposure therapy conducted in groups tended to be more effective for the subset of patients with social skills deficits, most likely by enabling those individuals with deficits to develop their skills through exposure to social situations and interactions in the group. There is con-flicting evidence that guided exposure is more effective when cognitive therapy is included than when exposure is conducted without cognitive therapy.

Heimberg and colleagues (1990) compared supportive psy-chotherapy with a comprehensive CBGT package that included exposure to simulated and real social situations as well as cogni-tive restructuring for the treatment of social phobia. Although both groups improved on most measures, patients receiving CBGT were significantly more improved immediately after treat-ment and at 3- and 6-month follow-up. CBGT was more effective despite that patient ratings of treatment credibility and expecta-tions for improvement were equal for both treatments. Patients receiving CBGT continued to be more improved at 5-year follow-up, although only 41% of the original sample participated in the follow-up study, which limited the validity of these findings.

Four treatments for social phobia have been compared: 1) CBGT, 2) phenelzine, 3) supportive psychotherapy, and 4) pla-cebo. Overall, both phenelzine and CBGT were equally effective after 12 weeks of treatment and were significantly more effective than placebo or supportive psychotherapy. Phenelzine tended to work more quickly than CBGT and appeared to be more effec-tive on a few measures. However, preliminary analyses of long-term outcome showed that after discontinuing treatment, patients receiving CBGT were more likely than patients who received phenelzine to maintain their gains, with approximately half of patients taking phenelzine relapsing, compared with none of the patients who responded to CBGT.

In summary, it seems clear that effective psychosocial treatments and medications for social phobia exist. Although both types of treatments appear to be equally effective, each has advantages and disadvantages. Medication treatments may work more quickly and are less time-consuming for the patient and therapist. In contrast, improvement after CBT appears to last longer. Due to medication side effects, CBT may be more appropriate for some individuals. More studies are needed to examine the efficacy of combined medication and psychoso-cial treatments for social phobia. A meta-analysis of 24 stud-ies examining cognitive–behavioral and medication treatments for social phobia found that both treatments were more effec-tive than control conditions (Gould et al., 1997). In this study, the SSRIs and benzodiazepines tended to have the largest effect sizes among medications and treatments involving exposure ei-ther alone or with cognitive therapy had the largest effect sizes among CBT. Another meta-analytic study of 108 psychological and pharmacological treatment-outcome trials found that the pharmacotherapies (SSRIs, benzodiazepines, MAO inhibitors) were the most consistently effective treatments, with both SS-RIs and benzodiazepine treatments equally effective and more effective than control groups (Fedoroff and Taylor, 2001). Fur-ther, maintenance of treatment gains for CBT was moderate and continued during follow-up intervals. In comparison, it is not known the extent to which treatment gains for medication treatments are maintained following discontinuation. Treatment decision trees for social and specific phobias are presented in Figures 50.3 and 50.4. 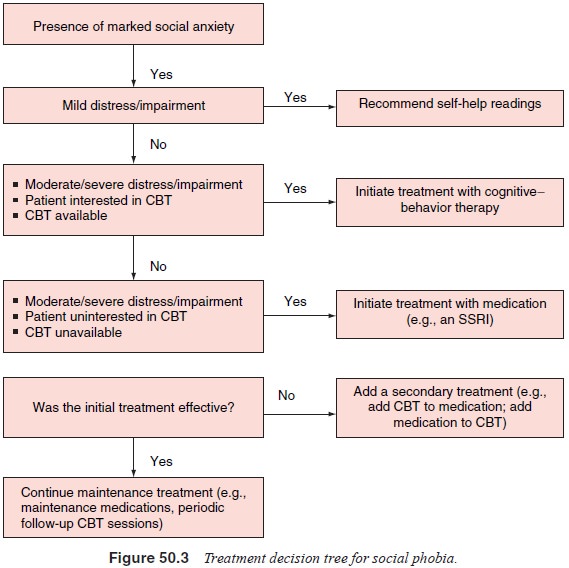 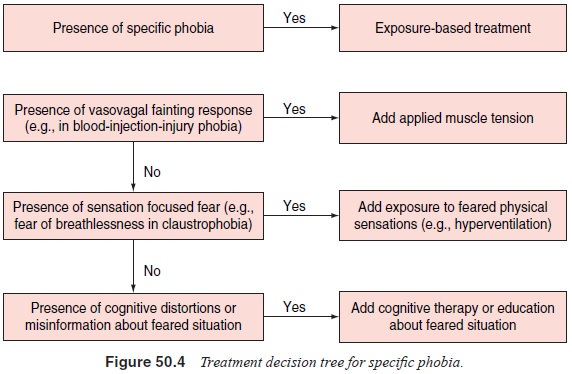