Panic disorder with agoraphobia may easily be misdiagnosed as social phobia or a specific phobia (especially the situational type).

Panic disorder with agoraphobia may easily be misdiagnosed as social phobia or a specific phobia (especially the situational type). For example, many patients with panic disorder avoid a variety of social situations because of anxiety about having oth-ers notice their symptoms. In addition, some individuals with panic disorder may avoid circumscribed situations, such as fly-ing, despite reporting no other significant avoidance. Four vari-ables should be considered in making the differential diagnosis: 1) type and number of panic attacks; 2) focus of apprehension; 3) number of situations avoided; and 4) level of intercurrent anxiety.

Patients with panic disorder experience unexpected panic attacks and heightened anxiety outside of the phobic situation, whereas those with specific and social phobias typically do not. In addition, individuals with panic disorder are more likely than those with specific and social phobias to report fear and avoid-ance of a broad range of situations typically associated with agoraphobia (e.g., flying, enclosed places, crowds, being alone, shopping malls). Finally, patients with panic disorder are typi-cally concerned only about the possibility of panicking in the phobic situation or about the consequences of panicking (e.g., be-ing embarrassed by one’s panic symptoms). In contrast, individu-als with specific and social phobias are usually concerned about other aspects of the situation as well (e.g., being hit by another driver, saying something foolish).

Consider two examples in which the differential diagnosis with panic disorder might be especially difficult. First, individu-als with claustrophobia are typically extremely concerned about being unable to escape from the phobic situation as well as being unable to breathe in the situation. Therefore, like patients with panic disorder and agoraphobia, they usually report heightened anxiety about the possibility of panicking. The main variable to consider in such a case is the presence of panic attacks outside of claustrophobic situations. If panic attacks occur exclusively in enclosed places, a diagnosis of specific phobia might best de-scribe the problem. In contrast, if the patient has unexpected or uncued panic attacks as well, a diagnosis of panic disorder might be more appropriate.

A second example is a patient who avoids a broad range of situations including shopping malls, supermarkets, walking on busy streets, and various social situations including parties, meetings and public speaking. Without more information, this patient’s problem might appear to meet criteria for social pho-bia, panic disorder with agoraphobia, or both diagnoses. As men-tioned earlier, patients with panic disorder often avoid social situ-ations because of anxiety about panicking in public. In addition, patients with social phobia might avoid situations that are typi-cally avoided by individuals with agoraphobia for fear of seeing someone that they know or of being observed by strangers. To make the diagnosis in this case, it is necessary to assess the rea-sons for avoidance.

Social phobia should not be diagnosed if the fear is related entirely to another disorder. For example, if an individual with obsessive–compulsive disorder avoids social situations only be-cause of the embarrassment of having others notice her or his excessive hand washing, a diagnosis of social phobia would not be given. Furthermore, individuals with depression, schizoid personality disorder, or a pervasive developmental disorder may avoid social situations because of a lack of interest in spending time with others. To be considered social phobia, an individual must avoid these situations specifically because of anxiety about being evaluated negatively.

Finally, social and specific phobias should be distinguished from normal states of fear and anxiety. Many individuals report mild fears of circumscribed situations or mild shyness in certain social situations. Others may report intense fears of public speak-ing or heights but insist that these situations rarely arise and that they have no interest in being in these situations. For the crite-ria for a specific or social phobia to be met, the individual must report significant distress about having the fear or must report significant impairment in functioning.

A variety of factors should be considered in deciding whether a patient’s fear exceeds the threshold necessary for a diagnosis of specific or social phobia. To make the differential diagnosis between normal fears and clinical phobias, the psy-chiatrist should consider the extent of the individual’s avoidance, the frequency with which the phobic stimulus is encountered, and the degree to which the individual is bothered by having the fear. For example, an individual who fears seeing snakes in the wild but who lives in the city never encounters snakes, and never even thinks about snakes would probably not be diagnosed with a specific phobia. In contrast, when an individual’s fear of snakes leads to avoidance of walking through parks, camping, swim-ming and watching certain television programs, despite having an interest in doing these things, a diagnosis of specific phobia would be appropriate.

Similar factors should be considered in deciding at what point normal shyness reaches an intensity that warrants a diag-nosis of social phobia. An individual who is somewhat quiet in groups or when meeting new people but does not avoid these situ-ations and is not especially distressed by his or her shyness would probably not receive a diagnosis of social phobia. In contrast, an individual who frequently refuses invitations to socialize because of anxiety, quits a job because of anxiety about having to talk to customers, or is distressed about her or his social anxiety would be likely to receive a diagnosis of social phobia.

Diagnostic decision trees for social and specific phobias are presented in Figures 50.1 and 50.2. 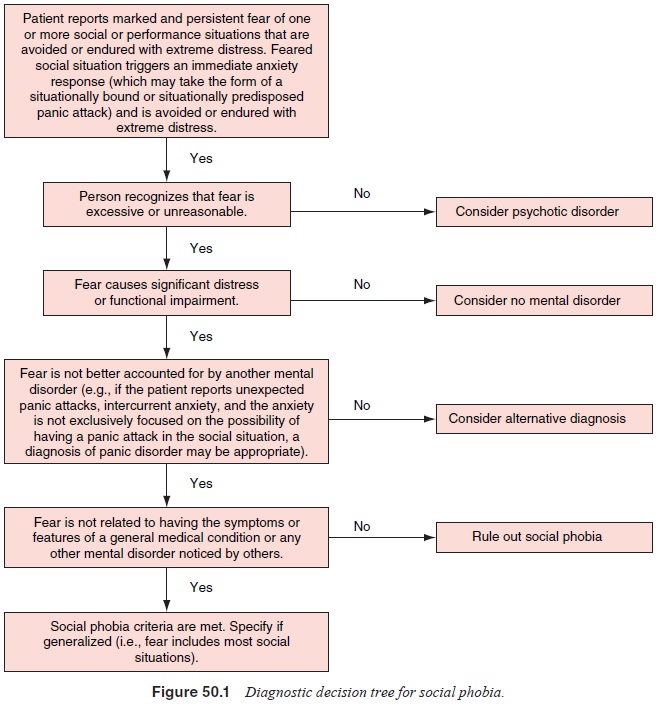 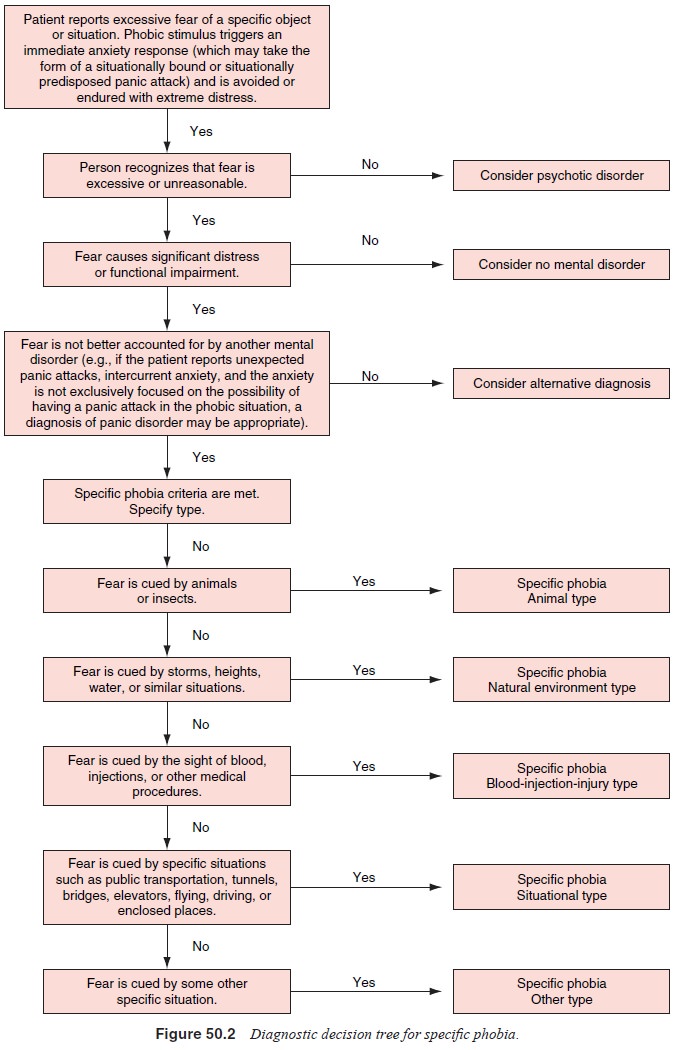