Free vibration occurs when a mechanical system is set off with an initial input and then allowed to vibrate freely. Examples of this type of vibration are pulling a child back on a swing and then letting go or hitting a tuning fork and letting it ring.

When a system is subjected to an initial disturbance and then left free to vibrate on its own, the resulting vibrations are referred to as free vibrations . Free vibration occurs when a mechanical system is set off with an initial input and then allowed to vibrate freely. Examples of this type of vibration are pulling a child back on a swing and then letting go or hitting a tuning fork and letting it ring. The mechanical system will then vibrate at one or more of its "natural frequencies" and damp down to zero.

Unbalance: This is basically in reference to the rotating bodies. The uneven distribution of mass in a rotating body contributes to the unbalance. A good example of unbalance related vibration would be the ―vibrating alert‖ in our mobile phones. Here a small amount of unbalanced weight is rotated by a motor causing the vibration which makes the mobile phone to vibrate. You would have experienced the same sort of vibration occurring in your front loaded washing machines that tend to vibrate during the ―spinning‖ mode.

Misalignment: This is an other major cause of vibration particularly in machines that are driven by motors or any other prime movers.

Bent Shaft: A rotating shaft that is bent also produces the the vibrating effect since it losses it rotation capability about its center.

Gears in the machine: The gears in the machine always tend to produce vibration, mainly due to their meshing. Though this may be controlled to some extent, any problem in the gearbox tends to get enhanced with ease.

Bearings: Last but not the least, here is a major contributor for vibration. In majority of the cases every initial problem starts in the bearings and propagates to the rest of the members of the machine. A bearing devoid of lubrication tends to wear out fast and fails quickly, but before this is noticed it damages the remaining components in the machine and an initial look would seem as if something had gone wrong with the other components leading to the bearing failure.

The presence of vibration in any mechanical system produces unwanted noise, high stresses, poor reliability, wear and premature failure of parts. Vibrations are a great source of human discomfort in the form of physical and mental strains.

4 METHODS OF REDUCTION OF VIBRATION:

¨     -unbalance is its main cause, so balancing of parts is necessary.

It is the time taken by a vibrating body to repeat the motion itself.time period is usually expressed in seconds.

It is the motion completed in one time period.

A motion which repeats itself after equal interval of time.

The maximum displacement of a vibrating body from the mean position.it is usually expressed in millimeter.

The number of cycles completed in one second is called frequency

The minimum number of independent coordinates required to specify the motion of a system at any instant is known as D.O.F of the system. 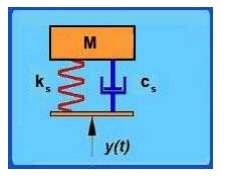 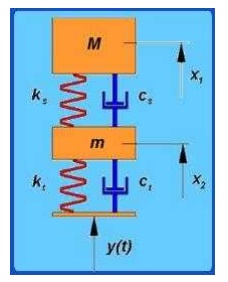 A two degree of freedom system With reference to automobile applications, this is referred as ―quarter car‖ model. The bottom mass refers to mass of axle, wheel etc components which are below the suspension spring and the top mass refers to the mass of the portion of the car and

passenger. Since we need to specify both the top and bottom mass positions to completely specify the system, this becomes a two degree of freedom system. 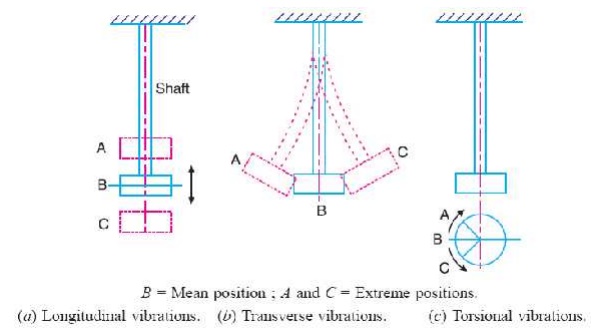 When a body is allowed to vibrate on its own, after giving it an initial displacement, then the ensuring vibrations are known as free or natural vibrations. When the vibrations take place parallel to the axis of constraint and no damping is provided, then it is called free undamped longitudinal vibrations. 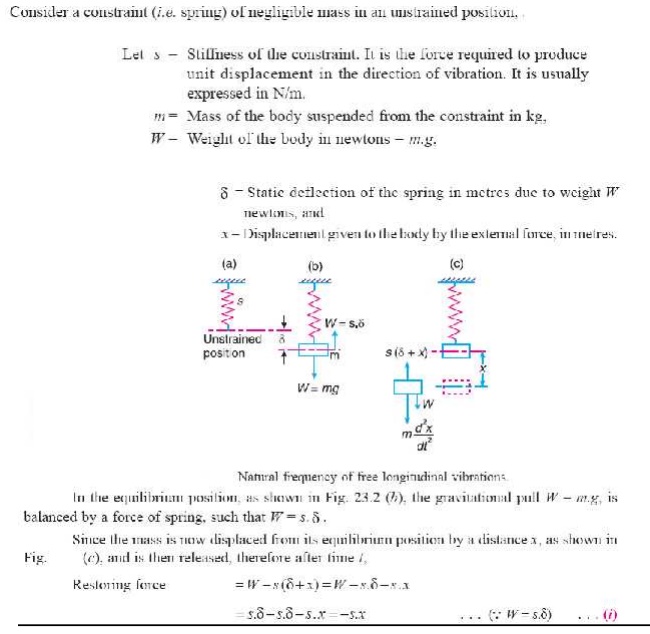 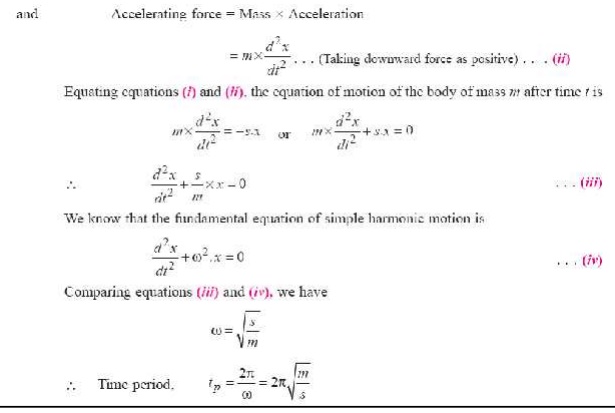 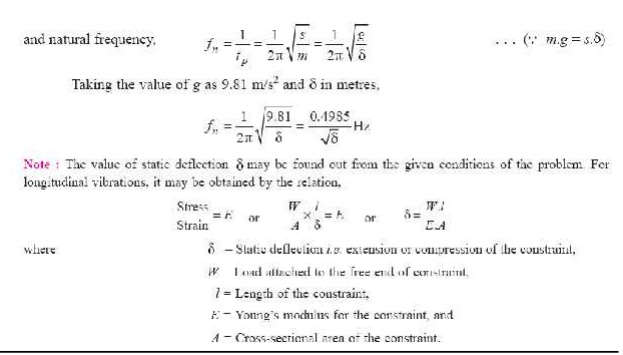 In free vibrations, no energy is transferred into the system or from the system. Therefore, the total energy (sum of KE and PE)is constant and is same all the times. 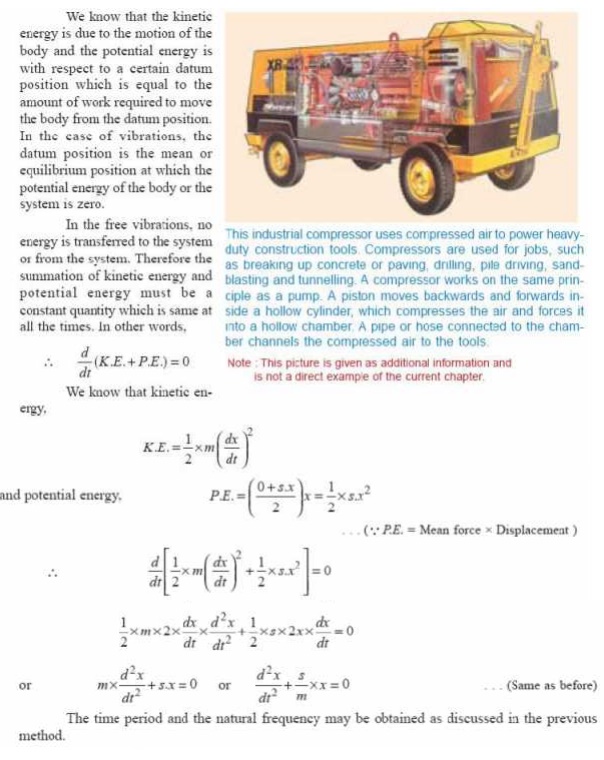 In this method, the maximum kinetic energy at mean position is made equal to the maximum potential energy at the extreme position. 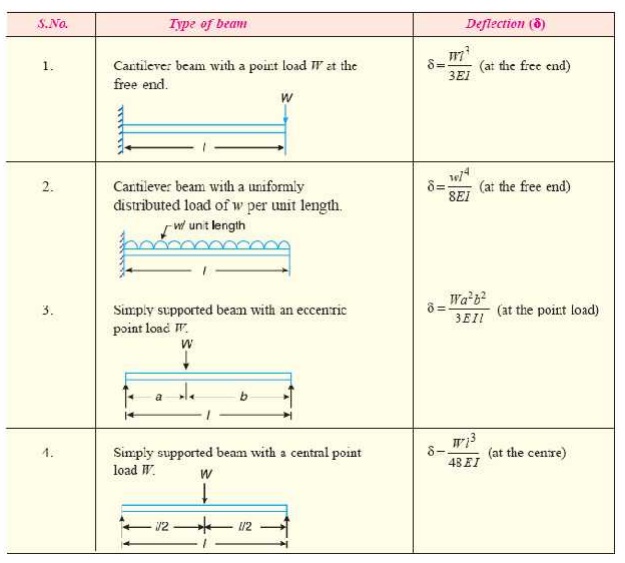 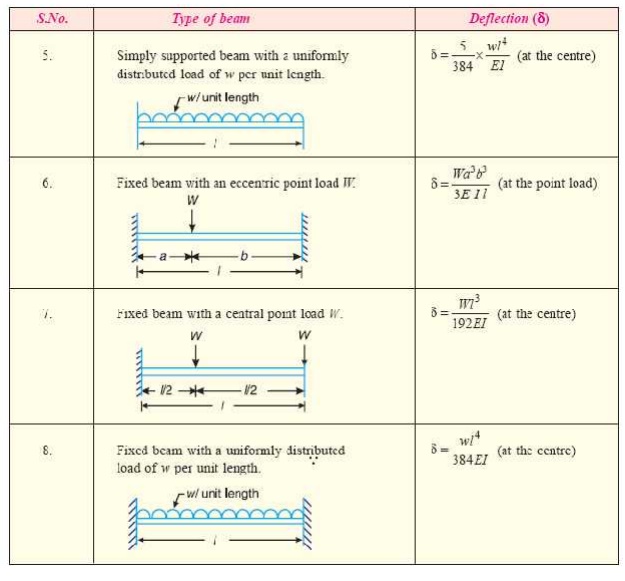 It is the resistance to the motion of a vibrating body. The vibrations associated with this resistance are known as damped vibrations.

The damping force per unit velocity is known as damping coefficient.

Dampers may be connected either in series or in parallel to provide required damping.

The vibrations associated with this resistance are known as damped vibrations. 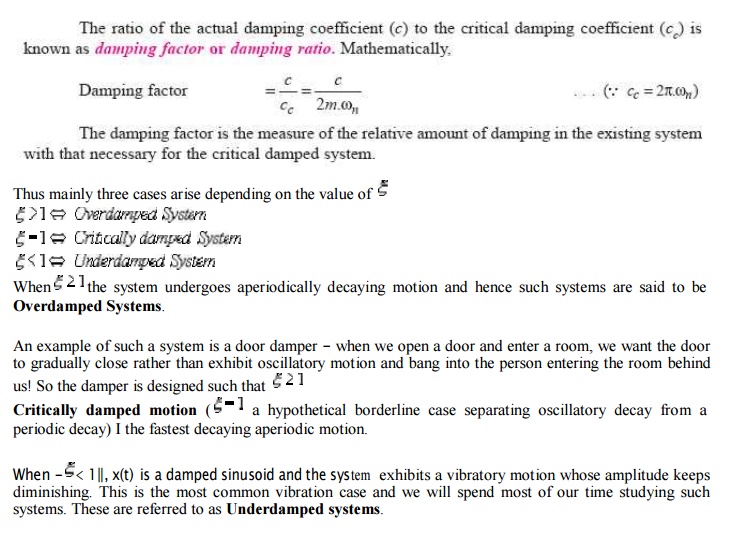 It is defined as the natural logarithm of ratio of any two successive amplitudes of an under damped system. It is a dimensionless quantity. 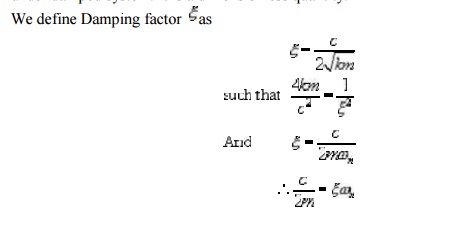 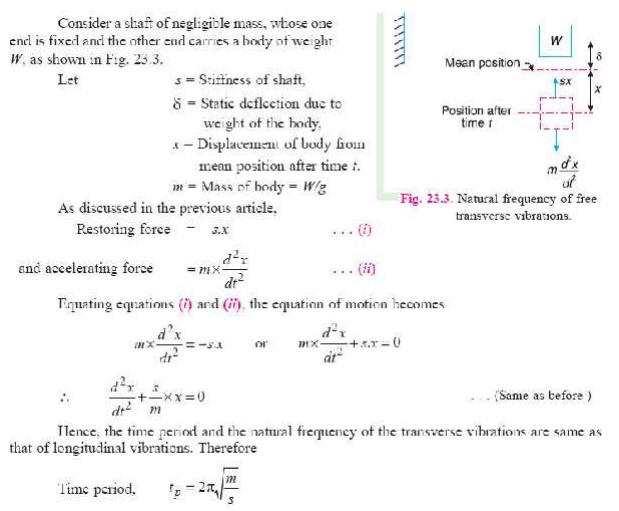 The speed, at which the shaft runs so that the additional deflection of the shaft from the axis of rotation becomes infinite, is known as critical or whirling speed.

No shaft can ever be perfectly straight or perfectly balanced. When an element of mass is a distance from the axis of rotation, centrifugal force, will tend to pull the mass outward. The elastic properties of the shaft will act to restore the ―straightness‖. If the frequency of rotation is equal to one of the resonant frequencies of the shaft, whirling will occur. In order to save the machine from failure, operation at such whirling speeds must be avoided. 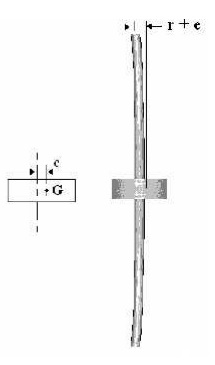 Where E = young's modulus, I = Second moment of area, m = mass of the shaft, L= length of the shaft between points

A shaft with weights added will have an angular velocity of N (rpm) equivalent as follows:

When the particles of the shaft or disc move in a circle about the axis of the shaft, then the vibrations known as tensional vibration 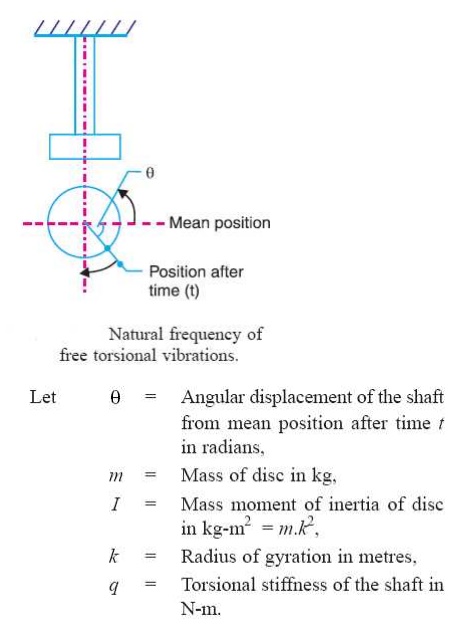 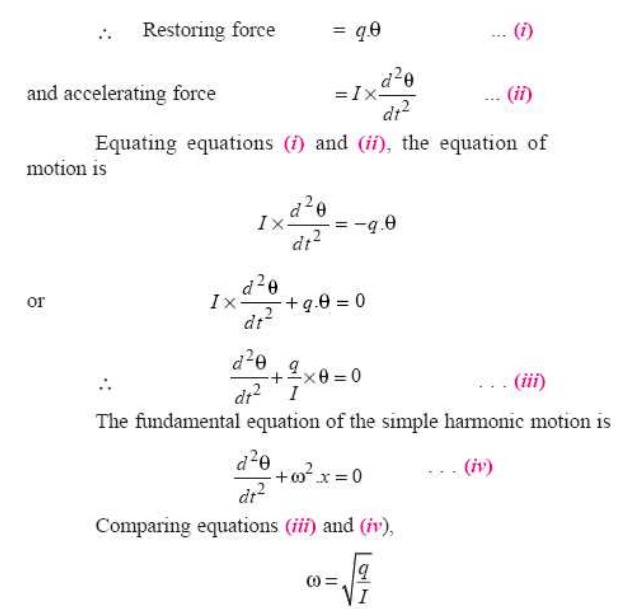 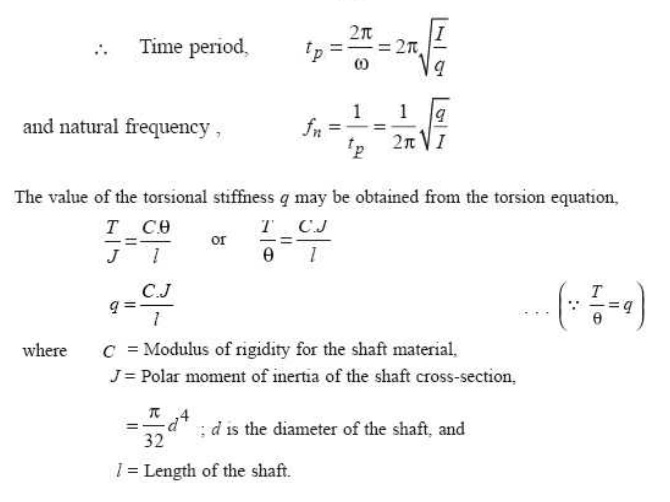 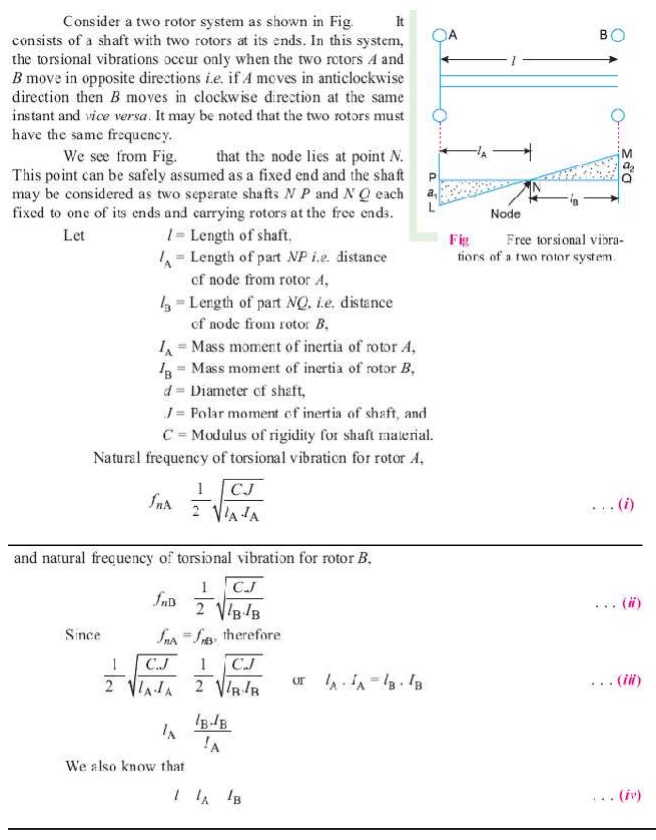 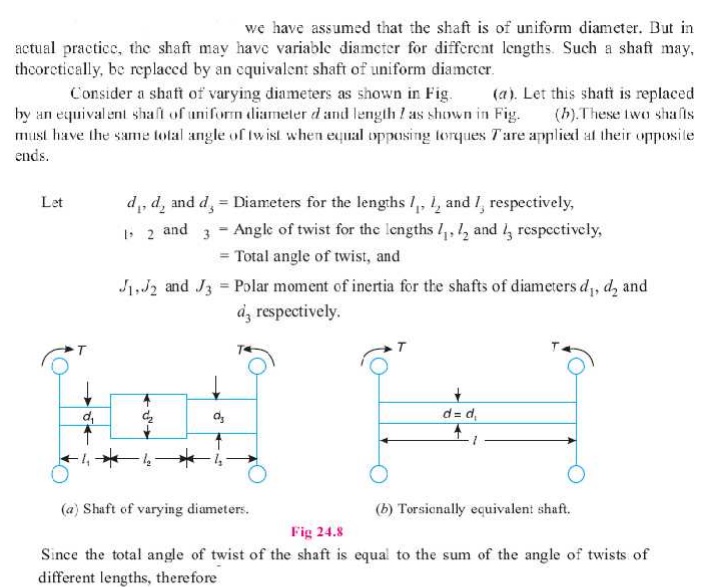 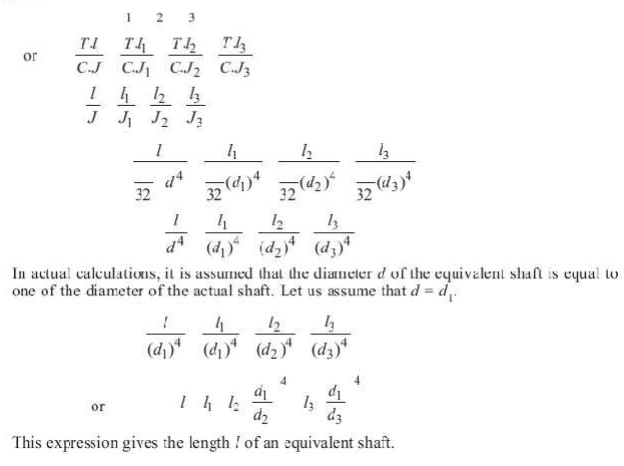