When a nerve impulse reaches the neuromuscular junction, about 125 vesicles of acetylcholine are released from the terminals into the synaptic space.

When a nerve impulse reaches the neuromuscular junction, about 125 vesicles of acetylcholine are released from the terminals into the synaptic space. Some of the details of this mechanism can be seen in Figure 7–2, which shows an expanded view of a synaptic space with the neural membrane above and the muscle membrane and its subneural clefts below. 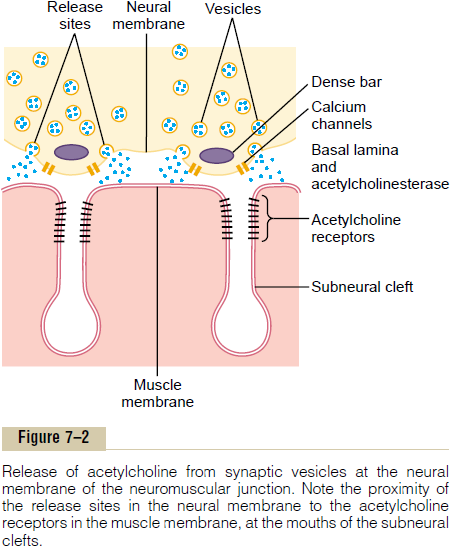 Although some of the aforementioned details are speculative, it is known that the effective stimulus for causing acetylcholine release from the vesicles is entry of calcium ions and that acetylcholine from the vesi-cles is then emptied through the neural membrane adjacent to the dense bars.

Effect of Acetylcholine on the Postsynaptic Muscle Fiber Mem-brane to Open Ion Channels. Figure 7–2 also shows manyvery smallacetylcholine receptors in the muscle fiber membrane; these are acetylcholine-gated ion channels, and they are located almost entirely near the mouths of the subneural clefts lying immediately below the dense bar areas, where the acetylcholine is emptied into the synaptic space. 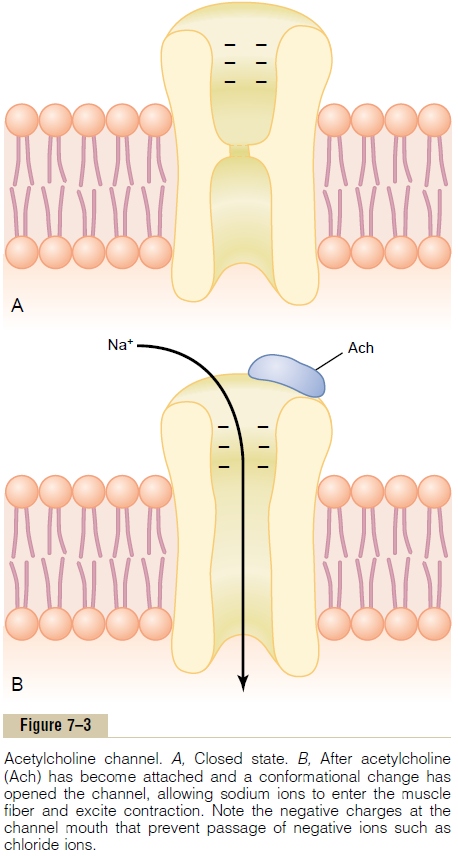 Each receptor is a protein complex that has a total molecular weight of 275,000. The complex is composed of five subunit proteins, two alpha proteins and one each of beta, delta, and gamma proteins. These protein molecules penetrate all the way through the mem-brane, lying side by side in a circle to form a tubular channel, illustrated in Figure 7–3. The channel remains constricted, as shown in section A of the figure, until two acetylcholine molecules attach respectively to the two alphasubunit proteins. This causes a conforma-tional change that opens the channel, as shown in section B of the figure.

The opened acetylcholine channel has a diameter of about 0.65 nanometer, which is large enough to allow the important positive ions—sodium (Na+), potassium (K+), and calcium (Ca++)—to move easily through the opening. Conversely, negative ions, such as chloride ions, do not pass through because of strong negative charges in the mouth of the channel that repel these negative ions.

In practice, far more sodium ions flow through the acetylcholine channels than any other ions, for two reasons. First, there are only two positive ions in large concentration: sodium ions in the extracellular fluid, and potassium ions in the intracellular fluid. Second, the very negative potential on the inside of the muscle membrane, –80 to –90 millivolts, pulls the positively charged sodium ions to the inside of the fiber, while simultaneously preventing efflux of the positively charged potassium ions when they attempt to pass outward.

As shown in Figure 7–3B, the principal effect of opening the acetylcholine-gated channels is to allow large numbers of sodium ions to pour to the inside of the fiber, carrying with them large numbers of positive charges. This creates a local positive potential change inside the muscle fiber membrane, called the end platepotential. In turn, this end plate potential initiates anaction potential that spreads along the muscle mem-brane and thus causes muscle contraction.

End Plate Potential and Excitation of the Skeletal Muscle Fiber.

The sudden insurgence of sodium ions into the muscle fiber when the acetylcholine channels open causes the electrical potential inside the fiber at the local area ofthe end plate to increase in the positive direction asmuch as 50 to 75 millivolts, creating a local potential called the end plate potential. Recall that a sudden increase in nerve membrane potential of more than 20 to 30 millivolts is normally sufficient to initiate more and more sodium channel opening, thus initiating an action potential at the muscle fiber membrane. 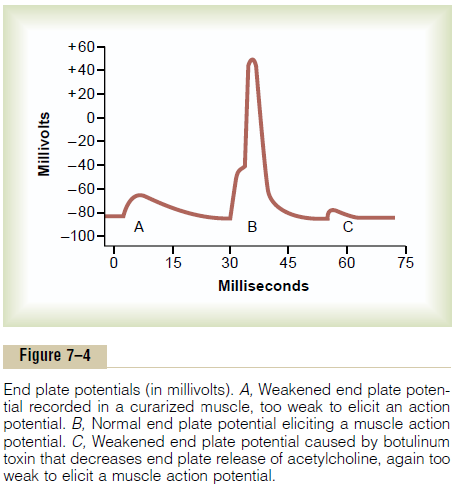