Secondary immunodeficiencies occur secondary to numerous diseases or conditions, or as a consequence of therapeutic mea-sures that depress the immune system.

This condition is caused due to a defective T-cell signaling resulting in failure to produce IgG in the body. This occurs in persons between the ages of 13 and 35 years. In this condi-tion, the number of B cells is normal, but the ability to pro-duce IgG and other immunoglobulins is greatly reduced. The cell-mediated immunity is normal. Patients with this condition are highly susceptible to infections caused by S. pneumoniae, H. influenzae, and other pyogenic bacteria. Administration ofintravenous gamma globulin reduces the infections caused by these bacteria.

In malnutrition, the synthesis of IgG is reduced due to low sup-ply of amino acids. People with malnutrition, hence, are sus-ceptible to infection by pyogenic bacteria.

Patients with AIDS caused by HIV are highly susceptible to infection by many opportunistic pathogens including bac-teria, viruses, fungi, and parasites. This is attributed to the loss of helper T-cell activity. The virus specifically infects and kills the cells bearing CD4 surface receptors. The immu-nity is highly suppressed, and failure of immune surveil-lance leads to a high incidence of tumors.

T-cell function is altered, but immunoglobulins are normal in patients suffering from measles. Patients show a temporary suppression of delayed hypersensitivity.

The synthesis of complement proteins is very much reduced in chronic hepatitis B or C and in liver failure caused by alcoholic cirrhosis. Hence, these patients are highly susceptible to infection by pyogenic bacteria.

In severe malnutrition, the synthesis of complement proteins by liver is reduced due to low supply of amino acids. Therefore, people with malnutrition are susceptible to infection by pyo-genic bacteria.

The condition is characterized by a low neutrophil count (less than 500/mL), caused commonly by cytotoxic drugs, such as those used in cancer therapy. The patients are susceptible to severe bacterial infections caused by pyogenic bacteria, such as S. aureus and S. pneumoniae. Immunodeficiency diseases havebeen summarized in Table 18-1. 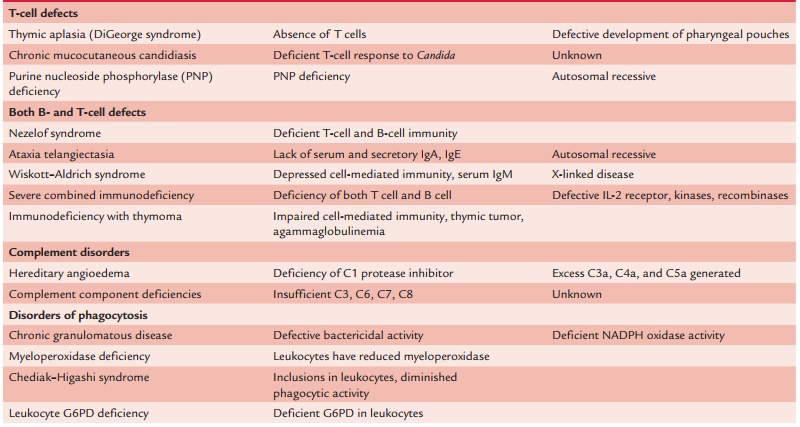