We noted earlier that one of the means by which hormones exert intracellular actions is to stimulate for-mation of the second messenger cAMP inside the cell membrane.

We noted earlier that one of the means by which hormones exert intracellular actions is to stimulate for-mation of the second messenger cAMP inside the cell membrane. The cAMP then causes subsequent intra-cellular effects of the hormone. Thus, the only direct effect that the hormone has on the cell is to activate a single type of membrane receptor. The second mes-senger does the rest.

cAMP is not the only second messenger used by the different hormones. Two other especially important ones are (1) calcium ions and associated calmodulin and (2) products of membrane phospholipid breakdown. 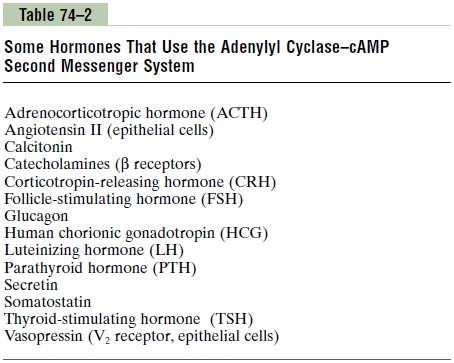 G protein. Stimulation of adenylyl cyclase, a membrane-bound enzyme, by the Gs protein then catalyzes the conversion of a small amount of cytoplasmic adenosine triphosphate (ATP) into cAMP inside thecell. This then activates cAMP-dependent proteinkinase, which phosphorylates specific proteins in thecell, triggering biochemical reactions that ultimately lead to the cell’s response to the hormone. 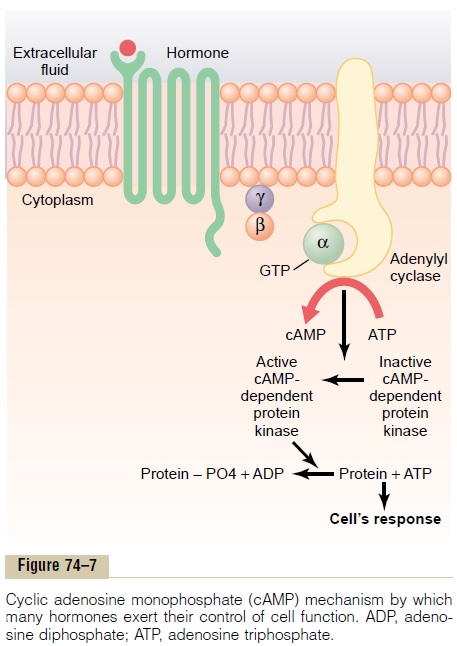 Once cAMP is formed inside the cell, it usually acti-vates a cascade of enzymes. That is, first one enzyme is activated, which activates a second enzyme, which acti-vates a third, and so forth. The importance of this mechanism is that only a few molecules of activated adenylyl cyclase immediately inside the cell mem-brane can cause many more molecules of the next enzyme to be activated, which can cause still more molecules of the third enzyme to be activated, and so forth. In this way, even the slightest amount of hormone acting on the cell surface can initiate a pow-erful cascading activating force for the entire cell.

The specific action that occurs in response to increases or decreases of cAMP in each type of target cell depends on the nature of the intracellular machin-ery—some cells have one set of enzymes, and other cells have other enzymes. Therefore, different func-tions are elicited in different target cells, such as initi-ating synthesis of specific intracellular chemicals, causing muscle contraction or relaxation, initiating secretion by the cells, and altering cell permeability.

Thus, a thyroid cell stimulated by cAMP forms the metabolic hormones thyroxine and triiodothyronine, whereas the same cAMP in an adrenocortical cell causes secretion of the adrenocortical steroid hor-mones. In epithelial cells of the renal tubules, cAMP increases their permeability to water.

Some hormones activate transmembrane receptors that activate the enzyme phospholipase C attached to the inside projections of the receptors (Table 74–3). This enzyme catalyzes the breakdown of some phos-pholipids in the cell membrane, especially phos-phatidylinositol biphosphate (PIP2), into two differentsecond messenger products: inositol triphosphate(IP3) and diacylglycerol (DAG). The IP3mobilizescalcium ions from mitochondria and the endoplasmic reticulum, and the calcium ions then have their own second messenger effects, such as smooth muscle con-traction and changes in cell secretion. 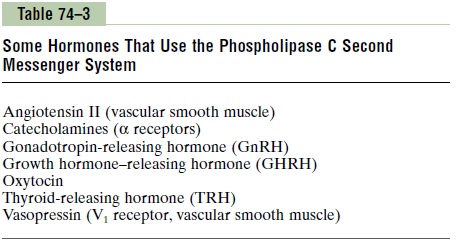 DAG, the other lipid second messenger, activates the enzyme protein kinase C (PKC), which then phos-phorylates a large number of proteins, leading to the cell’s response (Figure 74–8). In addition to these effects, the lipid portion of DAG is arachidonic acid, which is the precursor for the prostaglandins and other local hormones that cause multiple effects in tissues throughout the body. 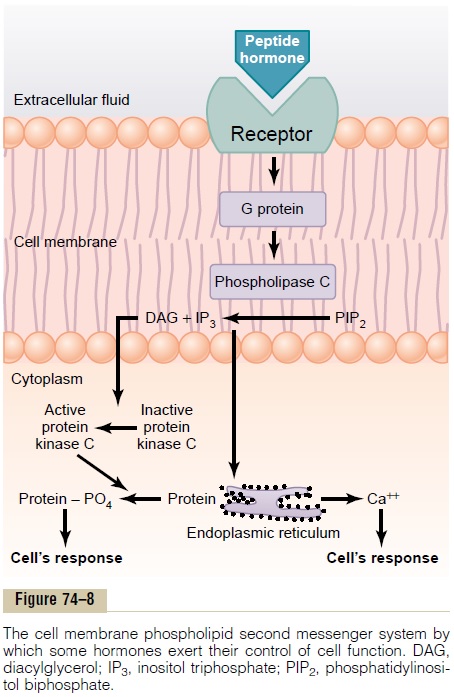 On entering a cell, calcium ions bind with the protein calmodulin. This protein has four calcium sites, and when three or four of these sites have bound with calcium, the calmodulin changes its shape and initiates multiple effects inside the cell, including activation or inhibition of protein kinases. Activation of calmodulin-dependent protein kinases causes, via phosphorylation, activation or inhibition of proteins involved in the cell’s response to the hormone. For example, one specific function of calmodulin is to acti-vate myosin kinase, which acts directly on the myosin of smooth muscle to cause smooth muscle contraction.

The normal calcium ion concentration in most cells of the body is 10-8 to 10-7 mol/L, which is not enough to activate the calmodulin system. But when the calcium ion concentration rises to 10-6 to 10-5 mol/L, enough binding occurs to cause all the intracellular actions of calmodulin. This is almost exactly the same amount of calcium ion change that is required in skele-tal muscle to activate troponin C, which causes skele-tal muscle contraction. It is interesting that troponin C is similar to calmodulin in both function and protein structure.