Chemical Structure and Synthesis of Hormones

Proteins and polypeptides, including hormonessecreted by the anterior and posterior pituitary gland, the pancreas (insulin and glucagon), the parathyroid gland (parathyroid hormone), and many others.

Chemical Structure and Synthesis of Hormones

There are three general classes of hormones:

1. Proteins and polypeptides, including hormonessecreted by the anterior and posterior pituitary gland, the pancreas (insulin and glucagon), the parathyroid gland (parathyroid hormone), and many others (see Table 74–1).

3. Derivatives of the amino acid tyrosine, secretedby the thyroid (thyroxine and triiodothyronine) and the adrenal medullae (epinephrine and norepinephrine). There are no known polysaccharides or nucleic acid hormones. 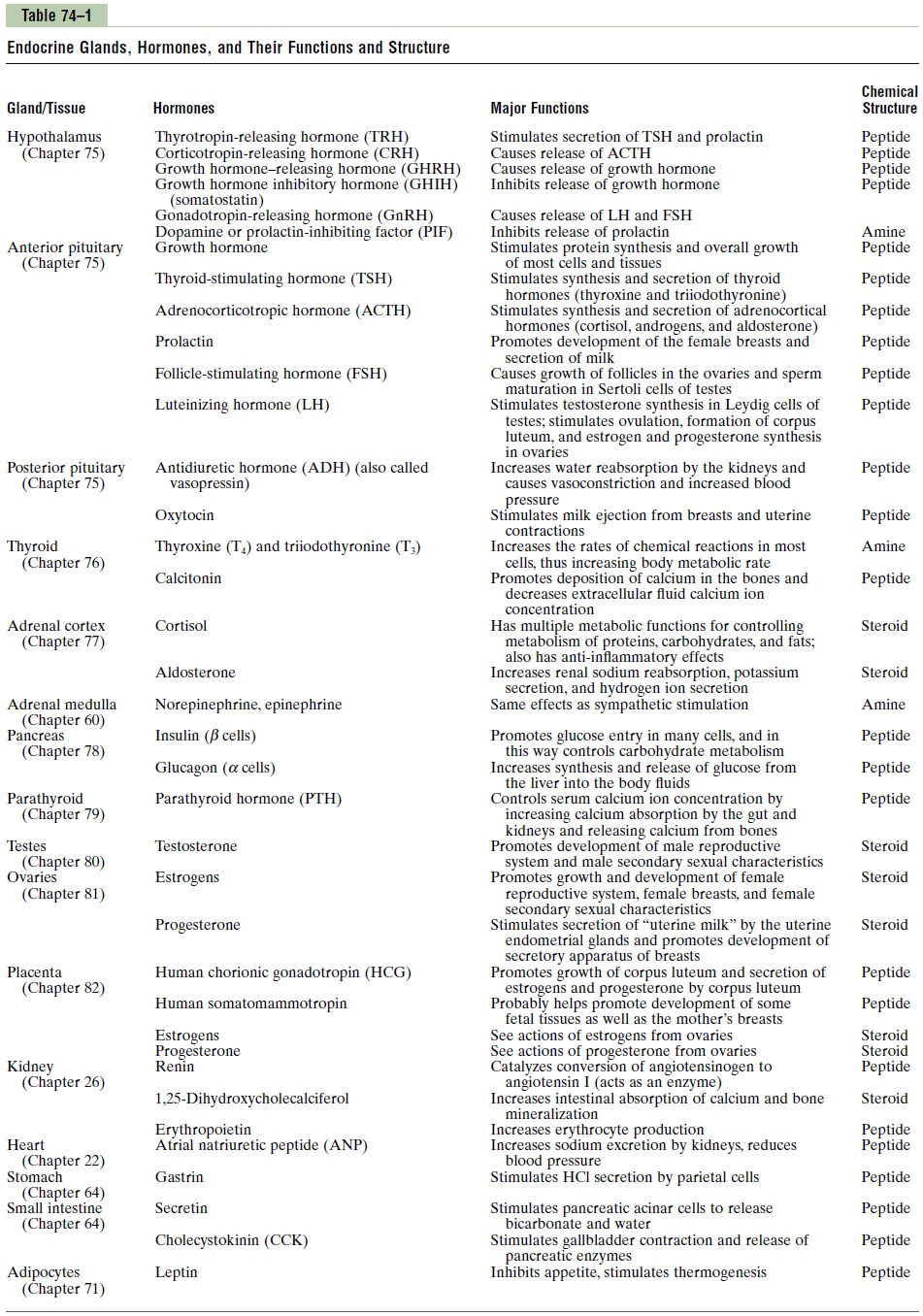 Protein and peptide hormones are synthesized on the rough end of the endoplasmic reticulum of the dif-ferent endocrine cells, in the same fashion as most other proteins (Figure 74–2). They are usually synthe-sized first as larger proteins that are not biologically active (preprohormones) and are cleaved to form smaller prohormones in the endoplasmic reticulum. These are then transferred to the Golgi apparatus for packaging into secretory vesicles. In this process, enzymes in the vesicles cleave the prohormones to produce smaller, biologically active hormones and inactive fragments. The vesicles are stored within the cytoplasm, and many are bound to the cell membrane until their secretion is needed. Secretion of the hor-mones (as well as the inactive fragments) occurs when the secretory vesicles fuse with the cell membrane and the granular contents are extruded into the interstitial fluid or directly into the blood stream by exocytosis. 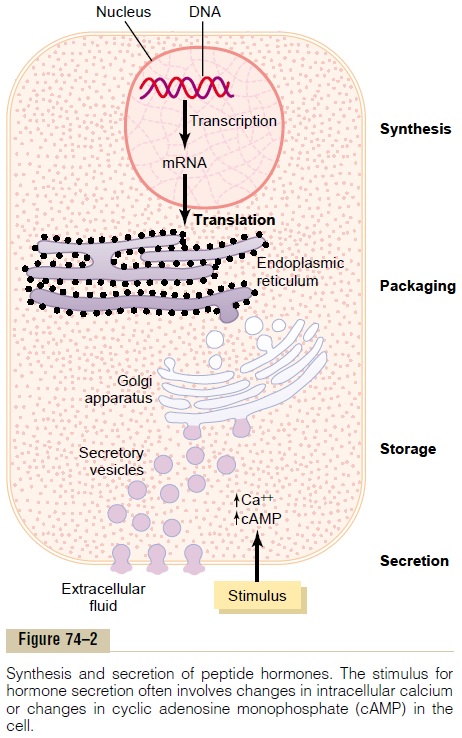 In many cases, the stimulus for exocytosis is an increase in cytosolic calcium concentration caused by depolarization of the plasma membrane. In other instances, stimulation of an endocrine cell surface receptor causes increased cyclic adenosine monophos-phate (cAMP) and subsequently activation of protein kinases that initiate secretion of the hormone. The peptide hormones are water soluble, allowing them to enter the circulatory system easily, where they are carried to their target tissues. 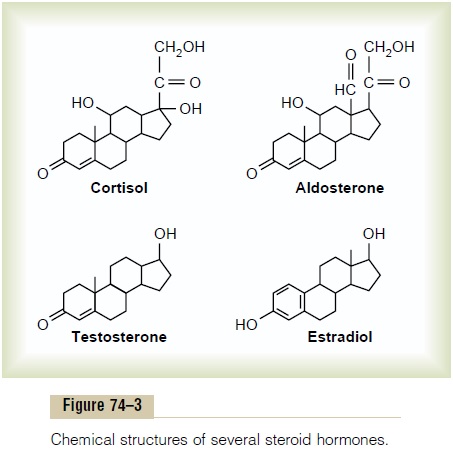 They are lipid soluble and consist of three cyclohexyl rings and one cyclopentyl ring combined into a single structure (Figure 74–3).

Amine Hormones Are Derived from Tyrosine. The two groupsof hormones derived from tyrosine, the thyroid and the adrenal medullary hormones, are formed by the actions of enzymes in the cytoplasmic compartments of the glandular cells. The thyroid hormones are synthesized and stored in the thyroid gland and incor-porated into macromolecules of the protein thy-roglobulin, which is stored in large follicles withinthe thyroid gland. Hormone secretion occurs when the amines are split from thyroglobulin, and the free hormones are then released into the blood stream. After entering the blood, most of the thyroid hor-mones combine with plasma proteins, especially thy-roxine-binding globulin, which slowly releases thehormones to the target tissues.

Epinephrine and norepinephrine are formed in the adrenal medulla, which normally secretes about four times more epinephrine than norepinephrine. Cate-cholamines are taken up into preformed vesicles and stored until secreted. Similar to the protein hormones stored in secretory granules, catecholamines are also released from adrenal medullary cells by exocytosis. Once the catecholamines enter the circulation, they can exist in the plasma in free form or in conjugation with other substances.