Almost without exception, a hormone affects its target tissues by first forming a hormone-receptor complex.

Almost without exception, a hormone affects its target tissues by first forming a hormone-receptor complex. This alters the function of the receptor itself, and the activated receptor initiates the hormonal effects. To explain this, let us give a few examples of the different types of interactions.

Ion Channel–Linked Receptors. Virtually all the neuro-transmitter substances, such as acetylcholine and norepinephrine, combine with receptors in the postsy-naptic membrane. This almost always causes a change in the structure of the receptor, usually opening or closing a channel for one or more ions. Some of these ion channel–linked receptors open (or close) channelsfor sodium ions, others for potassium ions, others for calcium ions, and so forth. The altered movement of these ions through the channels causes the subsequent effects on the postsynaptic cells. Although a few hormones may exert some of their actions through activation of ion channel receptors, most hormones that open or close ions channels do this indirectly by coupling with G protein–linked or enzyme-linked receptors, as discussed next.

G Protein–Linked Hormone Receptors. Many hormonesactivate receptors that indirectly regulate the activity of target proteins (e.g., enzymes or ion channels) by coupling with groups of cell membrane proteins called heterotrimeric GTP-binding proteins (G proteins)(Figure 74–4). There are more than 1000 known G protein–coupled receptors, all of which have seven transmembrane segments that loop in and out of the cell membrane. Some parts of the receptor that pro-trude into the cell cytoplasm (especially the cytoplas-mic tail of the receptor) are coupled to G proteins that include three (i.e., trimeric) parts—the a, b, and g sub-units. When the ligand (hormone) binds to the extra-cellular part of the receptor, a conformational change occurs in the receptor that activates the G proteins and induces intracellular signals that either (1) open or close cell membrane ion channels or (2) change the activity of an enzyme in the cytoplasm of the cell.

The trimeric G proteins are named for their ability to bind guanosine nucleotides. In their inactive state, the a, b, and g subunits of G proteins form a complex that binds guanosine diphosphate (GDP) on the a subunit. When the receptor is activated, it undergoes a conformational change that causes the GDP-bound trimeric G protein to associate with the cytoplasmic part of the receptor and to exchange GDP for guano-sine triphosphate (GTP). Displacement of GDP byGTP causes the a subunit to dissociate from the trimeric complex and to associate with other intracel-lular signaling proteins; these proteins, in turn, alter the activity of ion channels or intracellular enzymes such as adenylyl cyclase or phospholipase C, which alters cell function.

The signaling event is rapidly terminated when the hormone is removed and the a subunit inactivates itself by converting its bound GTP to GDP; then the a subunit once again combines with the b and g sub-units to form an inactive, membrane-bound trimeric G protein.

Some hormones are coupled to inhibitory G pro-teins (denoted Giproteins), whereas others arecoupled to stimulatory G proteins(denoted Gs pro-teins). Thus, depending on the coupling of a hormone receptor to an inhibitory or stimulatory G protein, a hormone can either increase or decrease the activity of intracellular enzymes. This complex system of cell membrane G proteins provides a vast array of poten-tial cell responses to different hormones in the various target tissues of the body.

Enzyme-Linked Hormone Receptors. Some receptors,when activated, function directly as enzymes or are closely associated with enzymes that they activate. These enzyme-linked receptors are proteins that pass through the membrane only once, in contrast to the seven-transmembrane G protein–coupled receptors. Enzyme-linked receptors have their hormone-binding site on the outside of the cell membrane and their cat-alytic or enzyme-binding site on the inside. When the hormone binds to the extracellular part of the recep-tor, an enzyme immediately inside the cell membrane is activated (or occasionally inactivated). Although many enzyme-linked receptors have intrinsic enzyme activity, others rely on enzymes that are closely asso-ciated with the receptor to produce changes in cell function. 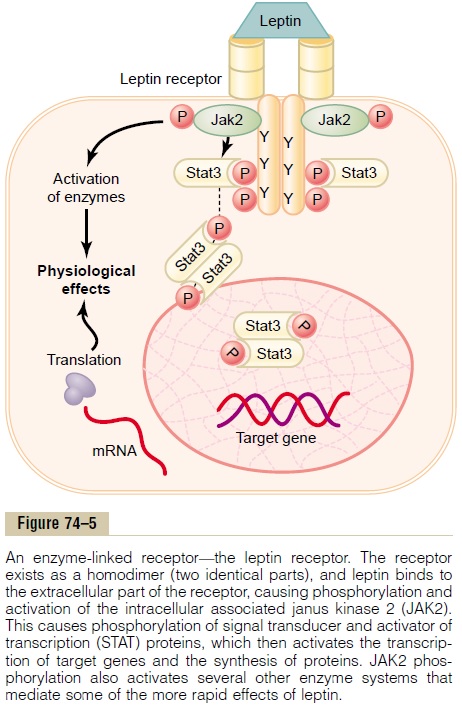 One example of an enzyme-linked receptor is the leptin receptor (Figure 74–5). Leptin is a hormone secreted by fat cells and has many physiological effects, but it is especially important in regulating appetite and energy balance. The leptin receptor is a member of a large family of cytokine receptors that do not themselves contain enzymatic activity but signal through associated enzymes. In the case of the leptin receptor, one of the signaling pathways occurs through a tyrosine kinase of thejanus kinase (JAK) family, JAK2. The leptin recep-tor exists as a dimer (i.e., in two parts), and binding of leptin to the extracellular part of the receptor alters its conformation, enabling phosphorylation and activa-tion of the intracellular associated JAK2 molecules. The activated JAK2 molecules then phosphorylate other tyrosine residues within the leptin receptor– JAK2 complex to mediate intracellular signaling. The intracellular signals include phosphorylation of signaltransducer and activator of transcription (STAT)pro-teins, which activates transcription by leptin target genes to initiate protein synthesis. Phosphorylation of JAK2 also leads to activation of other intracellular enzyme pathways such as mitogen-activated proteinkinases (MAPK) and phosphatidylinositol 3-kinase (PI3K). Some of the effects of leptin occur rapidly asa result of activation of these intracellular enzymes, whereas other actions occur more slowly and require synthesis of new proteins.

Another example, one widely used in hormonal control of cell function, is for the hormone to bind with a special transmembrane receptor, which then becomes the activated enzyme adenylyl cyclase at the end that protrudes to the interior of the cell. This cyclase catalyzes the formation of cAMP, which has a multitude of effects inside the cell to control cell activ-ity. cAMP is called a second messenger because it is not the hormone itself that directly institutes the intracellular changes; instead, the cAMP serves as a second messenger to cause these effects.

For a few peptide hormones, such as atrial natri-uretic peptide (ANP), cyclic guanosine monophos-phate (cGMP), which is only slightly different fromcAMP, serves in a similar manner as a second messenger.

Several hormones, including adrenal and gonadal steroid hormones, thyroid hormones, retinoid hor-mones, and vitamin D, bind with protein receptors inside the cell rather than in the cell membrane. Because these hormones are lipid soluble, they readily cross the cell membrane and interact with receptors in the cytoplasm or nucleus. The activated hormone-receptor complex then binds with a specific regulatory (promoter) sequence of the DNA called the hormoneresponse element, and in this manner either activatesor represses transcription of specific genes and for-mation of messenger RNA (mRNA) (Figure 74–6). Therefore, minutes, hours, or even days after the hormone has entered the cell, newly formed proteins appear in the cell and become the controllers of new or altered cellular functions. 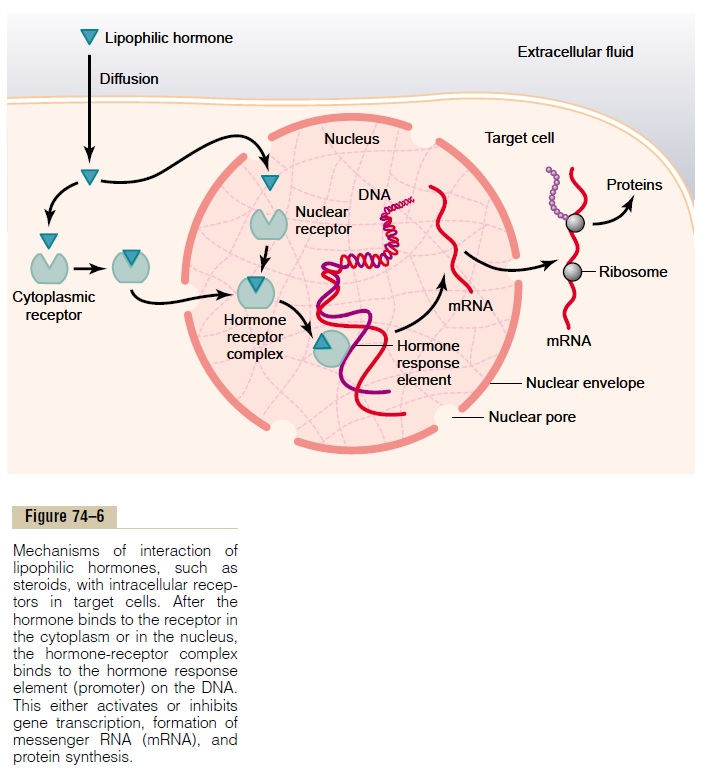