A shift from manual labour-based to more technical and machine-based manufacturing industry marked the Industrial Revolution in the United States.

A shift from manual labour-based to more technical and machine-based manufacturing industry marked the Industrial Revolution in the United States. Samuel Slater, a citizen of England, having worked at a cotton mill from age 10, had gained enough experience to operate a mill. On learning that Americans were interested in the new techniques, Slater departed for New York in 1789 illegally. Slater offered his services to Moses Brown, a leading Rhode Island industrialist, who had earlier made an unsuccessful attempt to operate a mill. Brown agreed and in consequence the mill became operational in 1793, being the first water-powered roller spinning textile mill in the Americas. By 1800, Slater’s mill had been duplicated by many other entrepreneurs as Slater grew wealthier and his techniques more and more popular. Andrew Jackson, the U.S. President hailed him as “Father of the American Industrial Revolution.” 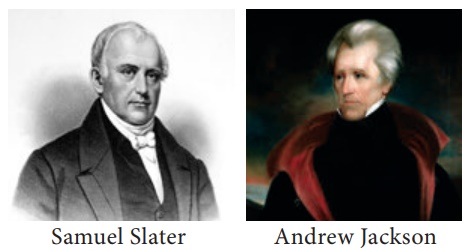 The United States in the nineteenth century began to show technological innovation. Robert Fulton established the steamboat service on the Hudson River. Samuel F.B. Morse’s invention of the telegraph and Elias Howe’s invention of the sewing machine came before the Civil war (1860–1865).

After the Civil War, industrialisation went on at a frantic pace. In 1869, the first transcontinental railroad was completed to transport people, raw materials and products. There was unprecedented urbanisation and territorial expansion in the US. As a result, between 1860 and 1900, fourteen million immigrants came to the country, providing workers for a variety of industries. The invention of electric bulb by Thomas Alva Edison (1879) and telephone by Alexander Graham Bell (1885) changed the world beyond recognition.

Andrew Carnegie established the first steel mills in the U.S for mass production. He acquired business interests in the mines that produced the raw materials for steel, the mills and ovens that created the final product and the railroad and shipping lines that transported goods, thus controlling every aspect of the steelmaking process. John D. Rockefeller merged the operation of many large companies to form a trust.  His Standard Oil Trust came to monopolise 90% of the industry and   reduced competition. 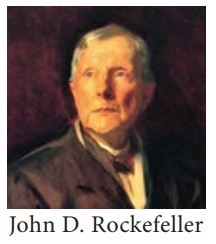 These monopolies affected John D. Rockefeller the smaller companies and even threatened them. The U.S. government supported the industrial growth by providing land for construction of railroads and protected the American industry from foreign competition.

The Industrial Revolution quickened the process of the transition of the United States from a rural to an urban society. Young people raised on farms saw greater opportunities in the cities and moved there, as did millions of immigrants from Europe. Providing housing for all the new residents of cities was a problem, and many workers found themselves living in urban slums; open sewers ran alongside the streets, and the water supply was often contaminated, causing disease.