Rural indebtedness refers to the situation of the rural people unable to repay the loan accumulated over a period.

Rural indebtedness refers to the situation of the rural people unable to repay the loan accumulated over a period. Existence of the rural indebtedness indicates the weak financial infrastructure of our country, in reaching the needy farmers, landless people and the agricultural labourers. 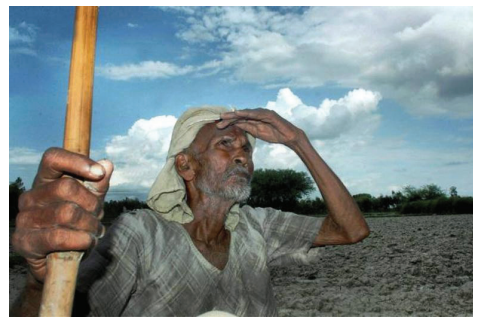 The farmers borrow loan for various purposes like agricultural operations, supporting the family in the lean season or purchase of equipments in the recent years, expensesoncelebrations,liquorconsumption and medicines go on increasing without any limit. Due to lower income, the villagers are unable to repay the loans or pay the pending interest on the principal amount.

According to the Government of India’s Socio Economic and Caste Census (SECC), 2015, around 73 per cent of households in India are rural. Of these, 18.5 per cent are scheduled caste households and 11 per cent belong to the scheduled tribe category.

The data of the National Sample Survey Organisation (NSSO, 2002 -03) reveals that only about 30 per cent of the poor borrowers get credit from the formal banks. According to the All India Debt and Investment Survey (AIDIS) 2002, the share of institutional credit has declined from 66.3 per cent in 1991 to 57.1 percent in 2002, with a corresponding increase in informal channels of credit (RBI, 2006).

Nearly three fourth of rural families in the country are in debt. The amount of debt is heavier in the case of small farmers. Cultivators are more indebted than the non-cultivators. Most of the debts taken are short term and of unproductive nature. The proportion of debts having higher rates of interest is relatively high. Most of the villagers are indebted to private agencies particularly money lenders.

The causes for rural indebtedness may be summarized as below:

1.        Poverty of Farmers: The vicious circle of poverty forces the farmers to borrow for consumption, cultivation and celebrations. Thus, poverty, debt and high rates of interest hold the farmer in the grip of money lenders.

2.        Failure of Monsoon: Frequent failure of monsoon is a curse to the farmers and they have to suffer due to the failure of nature. Therefore, farmers find it difficult to identify good years to repay their debts.

3.        Litigation: Due to land disputes litigation in the court compels them to borrow heavily. Being uneducated and ignorant they are caught in the litigation process and dry away their savings and resources.

4.        Money Lenders and High Rate of Interest: The rate of interest charged by the local money lenders is very high and the compounding of interest leads to perpetuate indebtedness of the farmer.

Regional Rural Banks came into existence based on the recommendation made by a working group on rural banks appointed by the Government of India in 1975. RRBs are recommended with a view to developing rural economy by providing credit and other facilities particularly to the small and marginal farmers, agricultural labourers, artisans and small entrepreneurs. RRBs are set up by the joint efforts of the Centre and State Governments and commercial banks. At present, there are 64 Regional Rural Banks in India. The RRBs confine their lending’s only to the weaker sections and their lending rates are at par with the prevailing rate of cooperative societies.

Micro finance, also known as micro credit, is a financial service that offers loans, savings and insurance to entrepreneurs and small business owners who do not have access to traditional sources of capital, like banks or investors. The goal of micro financing is to provide individuals with money to invest in themselves or their business. Microfinance is available through micro finance institutions, which range from small nonprofit organizations to larger banks. In India, Non Government Organizations (NGOs) play a pivotal role in the development of micro finance service. Microfinance industry in India have grown vastly in the last two decades. In 2009, the total number of micro finance institutions in India was around 150 (Tripathi, 2014).

Self Help Groups are informal voluntary association of poor people, from the similar socio-economic background, up to 20 women (average size is 14). They come together for the purpose of solving their common problems through self-help and mutual help. The SHG promotes small savings among its members. They save small amounts Rs.10 to Rs.50 a month. The savings are kept with a bank. After saving regularly for a minimum of 6 months, they lend small amounts to their members for interest. 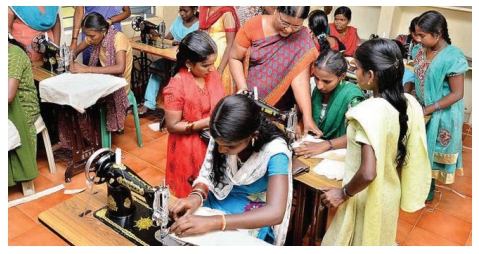 In 2009 -10, the number of new SHGs having credit-linked with banks was 1.59 million and a bank loan of Rs.14,453 Crores was disbursed to these SHGs. Further, the number of SHGs which maintained savings accounts with banks at the end of March 2010 was 6.95 million.

Based on their performance, they are linked with the bank for further assistance under SHG Bank Linked Programme (SBLP) started in 1992. It is a holistic programme of micro-enterprises covering all aspects of self-employment, organization of the rural poor into self Help groups and their capacity building, planning of activity clusters, infrastructure build up, technology, credit and marketing.

Under NABARD SHG Linkage Programme, SHGs can borrow credit from bank on showing their successful track record of regular repayments of their borrowers. It has been successful in the states like Andhra Pradesh, Tamil Nadu, Kerala and Karnataka during 2005-06. These States received approximately 60 per cent of SHG linkage credit (Taruna and Yadav, 2016).

The main objective of this programme is to bring the beneficiaries above the poverty line by providing income generating assets to them through bank credit and government subsidy. NABARD estimates that there are 2.2 million SHGs in India, representing 33 million members that have taken loans from banks under its linkage program to date. The SHG Banking Linkage Programme since its beginning has been predominant in certain states, showing spatial preferences especially for the southern regions like Andhra Pradesh, Tamil Nadu, Kerala and Karnataka. These SHGs have helped the Banks to accumulate more funds. Actually the banks change higher interest for the SHGs than car owners.

Major Features of SHGs are

1.        SHG is generally an economically homogeneous group formed through a process of self-selection based upon the affinity of its members. 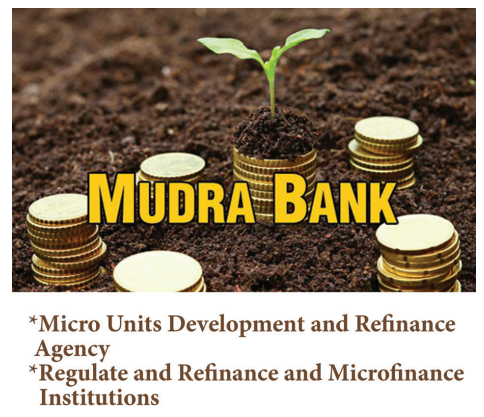 The principal objectives of the MUDRA Bank are the following

1.        Regulate the lender and the borrower of microfinance and bring stability to the microfinance system .

3.        Register all MFIs and introduce a system of performance rating and accreditation for the first time.

4.        Offer a Credit Guarantee scheme for providing guarantees to loans being offered to micro businesses.

5.        Introduce appropriate technologies to assist in the process of efficient lending, borrowing and monitoring of distributed capital.