Rosacea affects the face of adults, usually women. Although its peak incidence is in the thirties and forties, it can also be seen in the young or old. It may coexist with acne but is distinct from it.

Rosacea affects the face of adults, usually women. Although its peak incidence is in the thirties and forties, it can also be seen in the young or old. It may coexist with acne but is distinct from it.

The cause is still unknown. Rosacea is often seen in those who flush easily in response to warmth, spicy food, alcohol or embarrassment. Any psychological abnormalities, including neuroticism and depression, are secondary to the skin condition. No pharmaco-logical defect has been found which explains these flushing attacks. Sebum excretion rate and skin micro-biology are normal. A pathogenic role for the hair fol-licle mite, Demodex folliculorum, has not been proved.

The cheeks, nose, centre of forehead, and chin are most commonly affected; the peri-orbital and peri-oral areas are spared (Fig. 12.12). Intermittent flushing is followed by a fixed erythema and telangiectases. Discrete domed inflamed papules, papulopustules and, rarely, nodules develop later. Rosacea, unlike acne, has no comedones or seborrhoea. It is usually symmetrical. Its course is prolonged, with exacer-bations and remissions. Complications include ble-pharitis, conjunctivitis and, occasionally, keratitis. Rhinophyma, caused by hyperplasia of the sebaceous glands and connective tissue on the nose, is a striking complication (Fig. 12.13) that is more common in males. Lymphoedema, below the eyes and on the fore-head, is a tiresome feature in a few cases. Some patients treated with potent topical steroids develop a rebound flare of pustules, worse than the original rosacea, when this treatment is stopped. 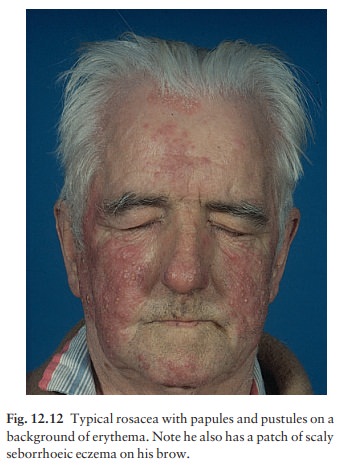 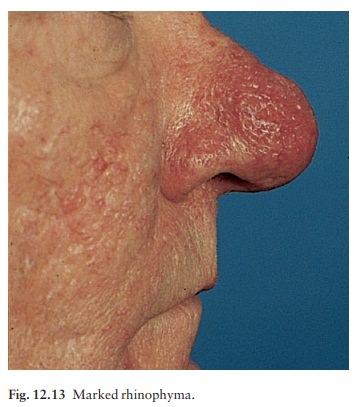 Acne has already been mentioned. Rosacea differs from it by its background of erythema and telangiec-tases, and by the absence of comedones. The distribu-tion of the lesions is different too, as rosacea affects the central face but not the trunk. Also rosacea usu-ally appears after adolescence. Seborrhoeic eczema, perioral dermatitis (Fig. 12.14), systemic lupus ery-thematosus  and photodermatitis should be considered, but do not show the papulopustules of rosacea. The flushing of rosacea can be confused with menopausal symptoms and, rarely, with the carcinoid syndrome. Superior vena caval obstruction has occasionally been mistaken for lymphoedematous rosacea. 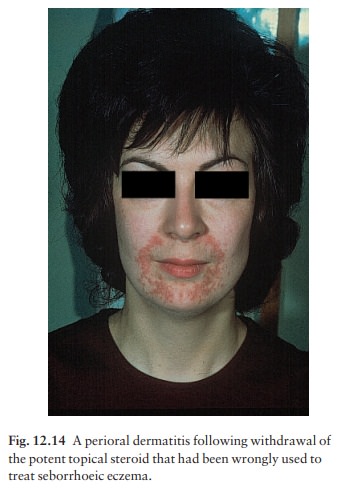 Tetracyclines, prescribed as for acne, are the traditional treatment and are usually effective. Erythromycin is the antibiotic of second choice. Courses should last for at least 10 weeks and, after gaining control with 500–1000 mg daily, the dosage can be  cut to 250 mg daily.

The condition recurs in about half of the patients within 2 years, but repeated anti-biotic courses, rather than prolonged maintenance ones, are generally recommended. Topical 0.75% metronidazole gel, applied sparingly once daily, is nearly as effective as oral tetracycline and often prolongs remission. It can be tried before systemic treatment and is especially useful in treating ‘stuttering’ recurrent lesions that do not then need repeated systemic courses of antibiotics. Rarely systemic metronidazole or isotretinoin  is needed for stubborn rosacea. Rosacea and topical steroids go badly together (Fig. 12.15); if possible patients should use traditional applications such as 2% sulphur in aqueous cream or 1% ichthammol in zinc cream. Sunscreens may help if sun exposure is an aggravating factor, but changes in diet or drinking habits are seldom of value. 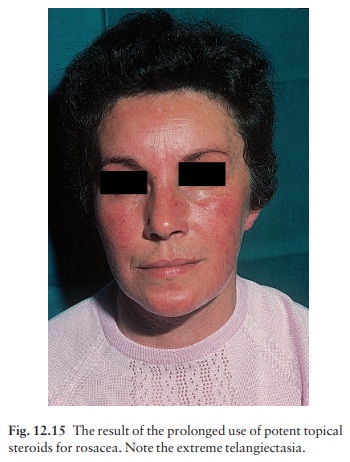