Acne frequently has marked psychological effects. Even those with mild acne need sympathy. An optimistic approach is essential, and regular encouragement worthwhile.

Acne frequently has marked psychological effects. Even those with mild acne need sympathy. An optimistic approach is essential, and regular encouragement worthwhile.

Occasionally an underlying cause  is found; this should be removed or treated.

At some time most teenagers try antiacne prepara-tions bought from their pharmacist; local treatment is enough for most patients with comedo-papular acne, although both local and systemic treatment are needed for pustulocystic scarring acne (Fig. 12.10). 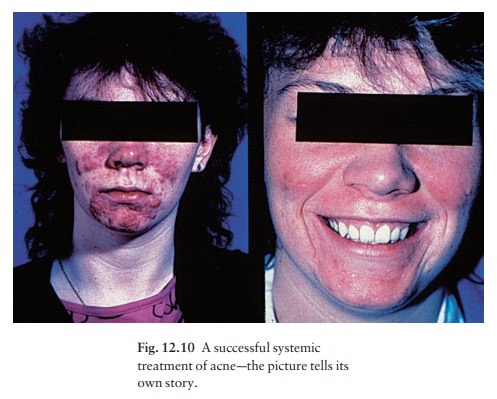 2 Benzoyl peroxide. This antibacterial agent isapplied only at night initially, but can be used twice daily if this does not cause too much dryness and irritation. It is most effective for inflammatory lesions It is wise to start with a 2.5 or 5% preparation, mov-ing up to 10% if necessary. Benzoyl peroxide bleaches coloured materials, particularly towels and flannels.

3 Retinoids. The vitamin A (retinol) analogues(tretinoin, adapalene, tazarotene) normalize follicular keratinization, and are especially effective against comedones. Patients should be warned about skin irritation (start with small amounts) and photosensit-ivity. Concomitant eczema is usually a contraindica-tion to its use. Tretinoin can be prescribed as a lotion, cream or gel. New preparations use microspheres (Retin-A micro) or specially formulated bases (Aveta) that minimize irritation. The weakest preparation should be used first, and applied overnight on altern-ate nights. Sometimes, after a week or two, it will have to be stopped temporarily because of irritation. As with benzoyl peroxide, it may be worth increasing the strength of tretinoin after 6 weeks if it has been well tolerated. The combination of benzoyl peroxide in the morning and tretinoin at night has many advocates.

•               Isotretinoin 0.05% is made up in a gel base (not available in USA) and applied once or twice daily. It irritates less than the same concentration of tretinoin.

•               Adapalene (0.1% gel) is a retinoid-like drug indi-cated for mild to moderate acne. It appears to work quicker and to be tolerated better than tretinoin.

Topical retinoids should not be prescribed for preg-nant woman with acne.

4 Azelaic acidis bacteriocidal forP. acnes: it isalso anti-inflammatory and inhibits the formation of comedones by reducing the proliferation of ker-atinocytes. It should be applied twice daily, but not used for more than 6 months at a time.

6 Sulphur. A number of time-honoured preparationscontaining sulphur are available on both sides of the Atlantic. Some are included in Formulary 1.

7 Local antibiotics. These include topical clindamy-cin, erythromycin and sulfacetamide.

8 Combinations. Some combinations work better thaneither of the drugs used separately. Erythromycin combined with a zinc acetate complex is popular and effective. It works as an antim-icrobial, an inhibitor of 5α-reductase , an antioxidant and as an immunomodulator. Ery-thromycin and clindamycin, in mixtures with benzoyl peroxide, reduce P. acnes numbers and the likeli-hood of resistant strains emerging.

10 Cosmetic camouflage. Cover-ups help some pati-ents, especially females, whose scarring is unsightly. They also obscure postinflammatory pigmentation. A range of make-ups is available in the UK and USA.

•  Oxytetracycline and tetracycline. An averagestarting dosage for an adult is 250 mg up to four times daily, but up to 1.5 g /day may be needed in resistant cases. The antibiotic should not be used for less than 3 months and may be needed for a year or two, or even longer. It should be taken on an empty stomach, 1 h before meals, or 4 h after food, as the absorption of these tetracyclines is decreased by milk, antacids and calcium, iron and magnesium salts. The dosage should be tapered in line with clinical improvement, an average maintenance dosage being 250–500 mg / day. Even with long courses, serious side-effects are rare, although candidal vulvovaginitis may force a change to a narrower spectrum antibiotic such as erythromycin.

•   Minocycline, 50 mg twice daily or 100 mg once ortwice daily (in a modified release preparation) is now preferred by many dermatologists, although it is much more expensive. Absorption is not significantly affected by food or drink. Minocycline is much more lipophilic than oxytetracycline and so probably con-centrates better in the sebaceous glands. It is bacterio-logically more effective than oxytetracycline and tetracycline and, unlike erythromycin, little resistance to it by Proprionibacteria has been recorded. It can be effective even when oxytetracycline has failed, but can cause abnormalities of liver function and a lupus-like syndrome.

•   Doxycycline, 100 mg once or twice daily is acheaper alternative to minocycline, but more fre-quently associated with phototoxic skin reactions.

Tetracyclines should not be taken in pregnancy or by children under 12 years as they are deposited in growing bone and developing teeth, causing stained teeth and dental hypoplasia. Rarely, the long-term administration of minocycline causes a greyish pigmentation, like a bruise, especially on the faces of those with actinic damage and over the shins.

Erythromycin (dosage as for oxytetracycline) isthe next antibiotic of choice but is preferable to tetracyclines in women who might become pregnant. Its major drawback is the development of resistant Proprionibacteria, now present in at least one in fourpatients with acne, which leads to therapeutic failure.

Trimethoprim is used by some as a third-line anti-biotic for acne, when a tetracycline and erythromycin have not helped. White blood cell counts should be monitored. Ampicillin is another alternative.

Hormonal. A combined antiandrogen– oestrogentreatment (Dianette: 2 mg cyproterone acetate and 0.035 mg ethinylestradiol) is available in many countries and may help persistent acne in women. Monitoring is as for any patient on an oral contracept-ive, and further contraceptive measures are unnecess-ary. Courses last for 8–12 months and the drug is then replaced by a low oestrogen/low progestogen oral contraceptive. These drugs are not for males.

A triphasic pill, or a pill with a high oestrogen content, is best for women with acne who also require oral contraception. Those on antibiotics should be warned of their possible interaction with oral contra-ceptives and should use other contraceptive precau-tions, especially if the antibiotics induce diarrhoea.

Isotretinoin (13-cis-retinoic acid,).This is an oral retinoid, which inhibits sebum excre-tion, the growth of P. acnes, and acute inflammatory processes. The drug is reserved for severe nodulo-cystic acne, unresponsive to the measures outlined above. It is routinely given for 4– 6 months only, in a dosage of 0.5–1 mg / kg body weight /day; young men with truncal acne usually require the higher dosage. A full blood count, liver function tests and fasting lipid levels should be checked, and routine urine analysis performed before the start of the course, and then at 4 weeks after starting the drug. Some physicians also monitor at 10 and 16 weeks and perform a final check 1 month after completing the course. The drug seldom has to be stopped, although rarely abnormalit-ies of liver function limit treatment.

Isotretinoin is highly teratogenic: before starting treatment women should sign a form confirming that, as far as they know, they are not pregnant and that they have been warned about this risk. They should take an oral contraceptive or Dianette for 2 months before starting isotretinoin, throughout treatment and for 1 month thereafter. Tests for pregnancy, prefer-ably performed on a blood sample, should be carried out twice before starting treatment and at follow-up visits. Contraception and teratogenicity of the drug must be discussed at all visits. The recommendations in the USA are especially stringent. Before receiving the drug the patient must sign that ‘I understand that I cannot receive a prescription for Accutane unless I have two negative pregnancy test results.

The first pregnancy test should be during the office visit when my prescriber decides to prescribe Accutane. The sec-ond test should be on the second day of my next men-strual cycle or 11 days after the last time I had unprotected sexual intercourse, whichever is later. I understand that I will have additional pregnancy testing, monthly, throughout my Accutane therapy.’ Furthermore, the manufacturer’s medication guide recommends that ‘you must use two separate effective forms of birth control at the same time for at least 1 month before starting Accutane, while you take it, and for 1 month after you stop taking it’. Treatment should start on day 3 of the patient’s next menstrual cycle following a negative pregnancy test.

Depression, sometimes leading to suicide, is a rare accompaniment of treatment. A causal relationship seems likely in a few patients, although this has yet to be confirmed in a large controlled study. Nevertheless, patients and their family doctors should be warned about the appearance or worsening of depression before starting a course of isotretinoin and patients should be asked to sign a document that indicates that the issue of adverse psychiatric events has been dis-cussed. The drug should be stopped immediately if there is any concern on this score. The possibility of adverse psychiatric events should be discussed at all visits. This potentially severe accompaniment of isotretinoin treatment has to be balanced against its remarkable efficacy in severe acne. The lives of most patients with conglobate acne have been transformed after successful treatment with isotretinoin.

Other side-effects of isotretinoin include a dry skin, dry and inflamed lips and eyes, nosebleeds, facial ery-thema, muscle aches, hyperlipidaemia and hair loss; these are reversible and often tolerable, especially if the acne is doing well. Rarer and potentially more serious side-effects include changes in night-time vision and hearing loss. Occasionally, isotretinoin flares acne at first, but this effect is usually short lived and the drug can be continued. It is because of its early side-effects that some dermatologists start isotretinoin in a low dose (e.g. 20 mg/day) and then work up to the target dose if no significant side-effects are reported at review during the first month of treatment. Early review appointments (e.g. at 1 and 2 weeks into treatment) are comforting to both patient and doctor. A useful ‘avoidance list’ for patients taking isotretinoin is given in Table 12.1. 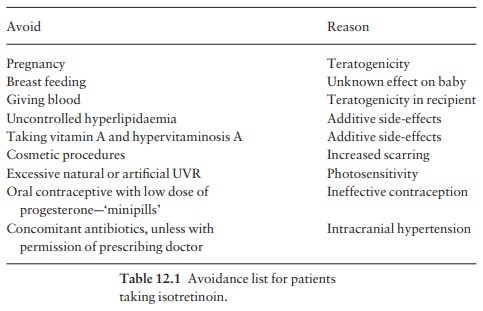 It is sensible for patients to avoid foods (e.g. nuts, chocolates, dairy products and wine) that they think make their acne worse, but there is little evidence that any dietary constituent, except iodine, causes acne.

Ultraviolet B radiation therapy often helps with exacer-bations. Two-month courses, during which the patient attends two or three times weekly, are usually adequate.

Cysts can be incised and drained with or without alocal anaesthetic.

Intralesional injections of 0.1 mL of triamcinoloneacetonide (2.5 –10 mg /mL) hasten the resolution of stubborn cysts, but can leave atrophy.

Dermabrasion. This helps to smooth out facial scars.A high-speed rotating wire brush planes down to a bleeding dermis. Dermabrasion should not be carried out if there are any active lesions and does not help depressed ‘ice-pick’ scars, which may best be excised. Unsightly hyperpigmentation may follow in darker skins. Microdermabrasion is well tolerated but its effects are usually transient.

Lasers. Skin resurfacing with CO2and erbium lasersis rapidly replacing dermabrasion and chemical peel-ing as the best treatment for postacne scarring. The procedure, which should be delayed until the acne is quiescent, is usually performed under local anaesthe-sia. Initially a small test area is treated and then assessed (Fig. 12.11). If the result is satisfactory, the treatment is extended. In expert hands the results can be dramatic. 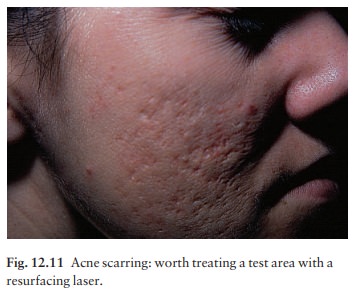 Collagen injections. Bovine collagen can be injectedinto depressed scars to improve their appearance. Patients with a history of any autoimmune disorder are excluded from this treatment. Shallow atrophic lesions do better than discrete ‘ice-pick’ scars. The procedure is expensive and has to be repeated every 6 months as the collagen is resorbed.