Home | | History 11th std | Rise of the Dynasty - The Rashtrakutas

History - Rise of the Dynasty - The Rashtrakutas | 11th History : Chapter 8 : Harsha and Rise of Regional Kingdoms

Rise of the Dynasty - The Rashtrakutas

The Rashtrakutas were originally known to be the feudatories of the Western Chalukyas of Vatapi.

Rise of the Dynasty

The Rashtrakutas were originally known to be the feudatories of the Western Chalukyas of Vatapi. Though Rashtrakutas were early rulers, the greatest ruler of the dynasty was Dandidurga. Ruling from a smaller part of Berar, Dandidurga built his career of territorial conquest after the death of Vikramaditya II (733–746 CE), the Chalukya ruler. He captured Gurjara Kingdom of Nandipuri, Malwa and eastern Madhya Pradesh and the whole of Berar. By 750 CE, he had become the master of central and southern Gujarat and the whole of Madhya Pradesh and Berar.

After consolidating his position, and after defeating Kirthivarman II (746–753 CE), the last Chalukya ruler of Vatapi, Dandidurga assumed the titles of Maharajadhiraja, Parameshwara and Paramabhattaraha. He developed relationships with the Pallava ruler Nandivarman II by giving his daughter in marriage to the Pallava king. After Dandidurga’s death in 758 CE, his uncle (father’s brother) Krishna I ascended the throne.

Krishna I and His Successors

Krishna I (756–775 CE) defeated the Gangas of Mysore. His eldest son Govinda II succeeded him in 775CE. He defeated the Eastern Chalukyas. He left the affairs of country to his brother Dhruva who eventually crowned himself as the ruler. During the reign of Dhruva (780–794 CE), the Rashtrakuta power reached its zenith. After humbling the western Ganga king, Dhruva defeated Dantivarman, the Pallava king. The ruler of Vengi (modern Andhra) also had to accept his suzerainty. After establishing his hegemony in the south, Dhruva turned his attention towards the regions around Kanauj. Vatsarya, the Prathihara king, and Dharmapala, the Pala ruler, who were contenders for supremacy in the region, were defeated by Dhruva. He nominated his third son Govinda III as the heir-apparent.

The accession of Govinda III (794–814 CE) to the throne heralded an era of success like never before. Dantika, the Pallava king, was subdued by Govinda III. Vishnuvardana, the ruler of Vengi, turned out to be his maternal grandfather and so he did not challenge his authority. Thus Govinda III became the overlord of the Deccan. The Rashtrakuta Empire reached its height of glory.

Govinda III was succeeded by his son Amoghavarsha (814–880 CE). Amoghavarsha ruled for 64 years and his first twenty years of the rule witnessed endless wars with the Western Gangas. Peace returned when Amoghavarsha gave his daughter in marriage to a Ganga prince. Amoghavarsha was a patron of literature and he patronised the famous Digambara acharya Jinasena, Sanskrit grammarian Sakatayana and the mathematician Mahaviracharya. Amoghavarsha was himself a great poet and his Kavirajamarga is the earliest Kannada work on poetics. After Amoghavarsha, his successors were able to sustain the vast empire, but the ablest among them was Krishna III (939–968 CE).

Krishna III was the last great ruler of the Rashtrakuta dynasty. Soon after his accession, he invaded the Chola kingdom along with his brother-in-law Butunga. Kanchi and Thanjavur were captured in 943 CE. His army remained in effective control of Thondaimandalam, consisting of Arcot, Chengalpattu and Vellore. In 949 CE, he defeated the Chola army of Rajadithya in the battle of Takkolam (in present day Vellore district). Krishna marched upto Rameshvaram where he built a pillar of victory. Thus he succeeded in establishing his suzerainty over the entire Deccan region. It was under him the Rashtrakutas joined the contest that was held then among the northern ruling dynasties for control of Kanauj. The continued conflict over the possession of Kanauj emboldened some of the local rajas to assert their independence. Their defiance destroyed the possibility of a single kingdom ruling northern India with its centre at Kanauj. Invasions from the north-west also prevented any such attempts to create a powerful state. But the successors of Krishna III were too weak to save the kingdom from its decline.

The worship of Shiva and Vishnu was popular during the Rashtrakuta reign. The famous rock-cut Shiva temple at Ellora was built by Krishna I. The seals have the pictures of Garudavahana of Vishnu or of Shiva seated in yogic posture. Dantidurga performed the Hiranyagarbha ritual at Ujjayini. There are references to Tula-danas gift or offer of gold equal to one’s own weight to temple deities. Jainism was patronised by later rulers such as Amoghavarsha I, Indra IV, Krishna II and Indra III. Buddhism had declined and its only important centre was at Kanheri.

The Rashtrakuta rulers were great patrons of learning. Kannada and Sanskrit literature made great progress during their reign. Amoghavarsha I was the author of Prasnottaramalika, a Sanskrit work, and Kavirajamarga, a Kannada work. Jinasena wrote the Adipurana of the Jains. Krishna II’s spiritual guide, Gunabhadra, wrote the Mahapurana of the Jains. The three gems of ancient Kannada literature – Kavichakravarthi Ponna, Adikavi Panpa and Kavichakravarti Ranna – were patronised by Rashtrkuta king Krishna III, as well as by Tailapa and Satyashraya of Western Chalukyas.

The Rashtrakutas made splendid contributions to Indian art. The rock-cut shrines at Ellora and Elephanta located in present-day Maharashtra belong to their period. The Ellora cave complex contains the features of Buddhist, Hindu and Jain monuments and art work. Amoghavarsha I espoused Jainism and there are five Jain cave temples at Ellora ascribed to his period.

The most striking structure at Ellora is the creation of the Monolithic Kailasanath Temple. The temple was hewn out of a single rock during the time of Krishna I in the 8th century. It is similar to the Lokesvara temple at Pattadakal, in Karnataka, built by Chalukya king Vikramaditya II to commemorate his victory over the Pallavas. The sculptured panels of Dasavatara Bhirava, Ravana shaking the Mount Kailasa, dancing Shiva and Vishnu, and Lakshmi listening to music are the best specimens of sculpture inside the temple. 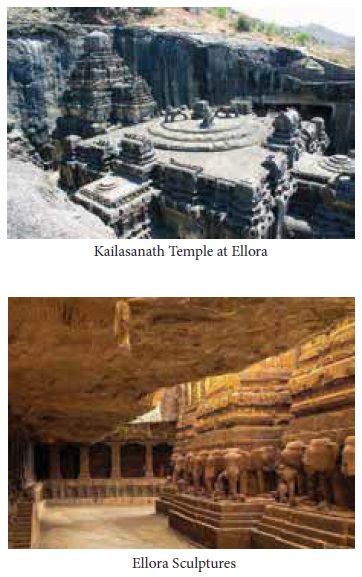 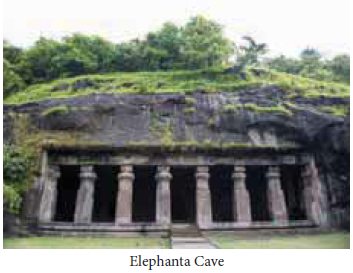 The main shrine at Elephanta is artistically superior to the shrines at Ellora. The sculptures such as Nataraja and Sadashiva excel even that of the Ellora sculptures in beauty and craftsmanship. Ardhanarishvara and Maheshamurti are the other famous sculptures. The latter, a three-faced bust of Lord Shiva, is 25 feet tall and considered one of the finest pieces of sculpture in India. The paintings are still seen in the porch of the temple of Kailasa and ceilings of the Mahesamurti shrine at Ellora.