Harsha’s immediate task was to take revenge on Sasanka.

On his accession in 606 CE Harsha focused his attention on the affairs of his sister Rajyasri who had fled to Vindhya mountains to escape from the evil design of Deva Gupta of Malwa to covet her. Harsha went to Vindhya mountain ranges and succeeded in saving his sister who was about to burn herself after killing Deva Gupta. Harsha consoled Rajyasri and brought her back to the kingdom of Kanauj. Later Rajyasri took to Buddhism and was instrumental in converting Harsha to Buddhism. 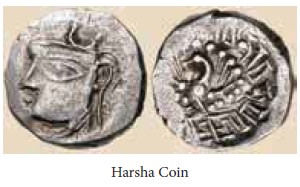 According to Bana, Harsha, in an effort to build an empire, sent an ultimatum to the following kings to either surrender or be prepared for a battle:


Harsha’s immediate task was to take revenge on Sasanka. Harsha entered into an alliance with the king of Kamarupa (Pragiyaotisha), which is today the modern Assam. But there is hardly any detail of the war between Harsha and Sasanka. However, Harsha seems to have successfully subjugated the Gauda Empire, which included Magatha, Gouda, Odra and Kongoda only after the death of Sasanka. 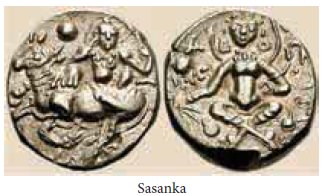 The hostilities between Harsha and the Maitrakas ended in the marriage of Dhruvabhatta with the daughter of Harsha. Soon, Valabhi became a subordinate ally of Harsha.

Harsha sought to extend his authority southward into the Deccan. However the Chalukya king Pulikesin II, who controlled the region, humbled Harsha. In commemoration of his victory over Harsha, Pulikesin assumed the title of “Parameswara”. Inscriptions in Pulikesin’s capital Badami attest to this victory. 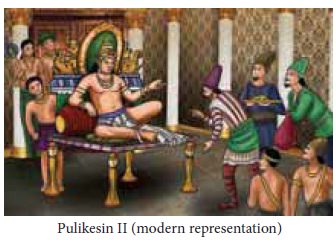 Harsha ruled for 41 years. His feudatories included those of Jalandhar (in the Punjab), Kashmir, Nepal and Valabhi. Sasanka of Bengal remained hostile to him. Though it is claimed that Harsha’s Empire comprised Assam, Bengal, Bihar, Kanauj, Malwa, Odisha, the Punjab, Kashmir, Nepal and Sindh, his real sway did not extend beyond a compact territory between the Ganges and Yamuna rivers. The kingdom of Harsha disintegrated rapidly into small states after his death.

Harsha had cordial relations with China. The contemporary T’ang emperor, Tai Tsung, sent an embassy to his court in 643 and again in 647 CE. On the second occasion, the Chinese ambassador found that Harsha had recently died. On learning that the throne had been usurped by an undeserving king, the Chinese ambassador rushed to Nepal and Assam to raise a force to dislodge the usurper. Later, the king who had usurped the throne was taken to China as a prisoner.

According to historian Burton Stein, a centralised administration did not even exist under the powerful Guptas. It was restricted only to the central part of the Gangetic plain between Pataliputra and Mathura. Beyond that zone,therewasnocentralisedauthority. The only difference between Guptas and Vardahanas is that the former had formidable enemies like Huns, while the latter had no such opponents. The copper plates of 632 CE record a gift of land to two Brahmans. The names of certain political personages with state power, as protectors of the gift, are mentioned in them. Some were mahasamantas, allied to the king but of a subordinate status. Others were independent maharajas but acknowledged feudatories of Harsha. There was yet another category of rulers who pledged their loyalty to Harsha and professed to be at his service. This is the characteristic of Harsha’s imperial authority in North India. 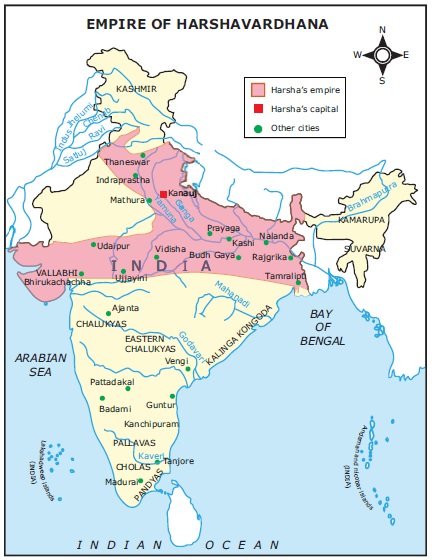 It appears that the ministerial administration during the reign of Harsha was the same as that of the imperial Guptas. The emperor was assisted by a council of ministers(Mantri Parishad)in his duties. The council played an important role in the selection of the king as well as framing the foreign policy of the empire. The prime minister was of the most important position in the council of ministers.

7. Mahaprathihara - Chief of the Palace Guard

Bhaga, Hiranya and Bali were the three kinds of tax collected during Harsha’s reign. Bhaga was the land tax paid in kind. One-sixth of the produce was collected as land revenue. Hiranya was the tax paid by farmers and merchants in cash. There is no reference to the tax Bali. The crown land was divided into four parts.

Part I - for carrying out the affairs of the state

Part II - for paying the ministers and officers of the crown

Criminal law was more severe than that of the Gupta age. Mimamsakas were appointed to dispense justice. Banishment and the cutting of limbs of the body were the usual punishments. Trial by ordeal was in practice. Life imprisonment was the punishment for the violations of the laws and for plotting against the king.

Hieun Tsang, the Chinese pilgrim, spent nearly 13 years in India (630–643 CE), collecting sacred texts and relics which he took back to China. He was known as the“ prince of pilgrims” because he visited important pilgrim centres associated with the life of Buddha. His Si-Yu-Ki provides detailed information about the social, economic, religious and cultural conditions during the reign of Harsha.

According to Hieun Tsang, perfect law and order prevailed throughout the empire, as the law-enforcing agencies were strong. The pilgrim records the principal penalties and judicial ordeals practised in India at that time. Corporal punishment for serious offences was in practise. But the death penalty was usually avoided. Offences against social morality and defiance of law were punished by maiming. Harsha travelled across the kingdom frequently to ensure his familiarity with his people. He was accessible to people and kept a closer watch on his tributary rulers.

Harsha paid great attention to discipline and strength of the army. The army consisted of elephants, cavalry and infantry. Horses were imported. Ordinary soldiers were known as Chatas and Bhatas. Cavalry officers were called Brihadisvaras. Infantry officers were known as Baladhikritas and Mahabaladhikritas. Hieun Tsang mentions the four divisions (chaturanga) of Harsha’s army. He gives details about the strength of each division, its recruitment system and payment for the recruits.

Division of the Empire

Hieun Tsang describes the structure, aesthetics and safety measures of the cities, towns and villages of India. In his view, India was the land of innumerable villages, numerous towns and big cities like China. He pointed out that Pataliputra lost its prominence and its place was taken by Kanauj. The elegance of Kanauj with its lofty structures, beautiful gardens and the museum of rare collections is described. The refined appearance of its residents, their costly dressings and love for learning and art are also pointed out in his account.

Most of the towns, according to Hieun Tsang, had outer walls and inner gates. Though the walls were wide and high, the streets and lanes were narrow.

Residential houses had balconies made of wood and coated with lime mortar. Floors were smeared with cow dung for the purpose of purity and hygiene. Big mansions, public buildings and Buddhist monasteries and viharas were magnificent multi-storeyed structures. They were built of kiln-fired bricks, red sandstone and marble. Harsha constructed a large number of viharas, monasteries and stupas on the bank of the Ganges.

Harsha built charitable institutions for the stay of the travellers, and to care for the sick and the poor. Free hospitals and rest houses (dharmasalas) in all the towns were constructed where the travellers or the outsiders could stay. Hospitals were built to provide medical treatment free of charge.

Harsha was a worshipper of Siva at least up to 631 CE. But he embraced Buddhism under the influence of his sister Rajyasri and the Buddhist monk Hieun Tsang. He subscribed to the Mahayana school of thought. Yet he held discourses among learned men of various creeds. Slaughter of animals and consumption of meat was restricted. Harsha summoned two Buddhist assemblies (643 CE), one at Kanauj and another at Prayag.

Harsha convened quinquennial assemblies known as Mahamoksha Parishad at Prayag (at the confluence of the Ganges and Yamuna).

Hedistributedhiswealth among Buddhists, Vedic scholars and the poor people. Harsha offered fabulous gifts to the Buddhist monks on all the four days of the assemblage.

Hieun Tsang observed that the principles of Buddhism had deeply permeated the Hindu society. According to him, people were given complete freedom of worship. Social harmony prevailed among the followers of various creeds. Harsha treated the Vedic scholars and the Buddhist bikshus alike and distributed charities equally to them.

Caste system was firmly established in the Hindu society. According to Hieun Tsang, the occupations of the four divisions of society continued to be in practice as in the previous times. People were honest and not deceitful or treacherous in their conduct. The butchers, fishermen, dancers and sweepers were asked to stay outside the city. Even though the caste system was rigid, there was no social conflict among the various sections of the society.

Hieun Tsang’s account also provides us information on the position of women and the marriage system of the times. Women wore purdah. Hieun Tsang, however, added that the purdah system was not followed among the higher class. He pointed out that Rajyasri did not wear purdah when listening to his discourse. Sati was in practice. Yasomatidevi, wife of Prabhakara Vardhana, immolated herself after the death of her husband.

The life pattern of the people of India during the rule of Harsha is known from the accounts of Hieun Tsang. People lived a simple life. They dressed in colourful cotton and silk clothes. The art of wearing fine cloth had reached perfection. Both men and women adorned themselves with gold and silver ornaments. The king wore extraordinary ornaments. Garlands and tiaras of precious stones, rings, bracelets and necklaces were some of the ornaments used by the royalty. The wealthy merchants wore bracelets. women used cosmetics.

Hieun Tsang also noted that Indians were mostly vegetarians. The use of onion and garlic in the food preparation was rare. The use of sugar, milk, ghee and rice in the preparation of food or their consumption was common. On certain occasions, fish and mutton were eaten. Beef and meat of certain animals were forbidden.

Education was imparted in the monasteries. Learning was religious in character. Much religious literature were produced. The Vedas were taught orally and not written down. Sanskrit was the language of the learned people. An individual took to learning between 9 and 30 years of age. Many individuals devoted their whole life to learning. The wandering bhikshus and sadhus were well known for their wisdom and culture. The people also paid respect to such people of moral and intellectual eminence.

Harsha as a Patron of Art and Literature

Harsha patronised literary and cultural activities. It is said the state spent a quarter of its revenue for such activities. Bana, the author of Harshacharita and Kadambari, was a court poet of Harsha. The emperor himself was a renowned litterateur, which is evident from the plays he wrote such as Priyadarsika, Rathnavali and Nagananda. Harsha gifted liberally for the promotion of education. Temples and monasteries functioned as centres of learning. Renowned scholars imparted education in the monasteries at Kanauj, Gaya, Jalandhar, Manipur and other places. The Nalanda University reached its utmost fame during this period.

Hieun Tsang recorded the fame of the Nalanda University. Students and scholars from the Buddhist countries like China, Japan, Mongolia, Sri Lanka, Tibet and some other countries of Central and Southeast Asia stayed and studied in the university. Shilabhadra, a reputed Buddhist scholar, who probably hailed from Assam, was the head of the University during the visit of Hieun Tsang. As an educational centre of international fame, Nalanda had 10,000 students on its rolls. Dharmapala, Chandrapala, Shilabhadra, Bhadrihari, Jayasena, Devakara and Matanga were important teachers in the university receiving royal patronage.