Establishment of Pala Rule in Bengal

Sashanka, the Gauda ruler, believed to have ruled between 590 and 625 CE, is considered the first prominent king of ancient Bengal.

Establishment of Pala Rule in Bengal

Sashanka, the Gauda ruler, believed to have ruled between 590 and 625 CE, is considered the first prominent king of ancient Bengal. After the fall of the Gauda kingdom, there was no central authority, which led to recurring wars between petty chieftains. So, in 750 CE, a group of chiefs met and decided on a “Kshatriya chief ” named Gopala to be their ruler. There is a story that Gopala was elected because of his ability to kill a “demoness” that had killed those who were previously elected like him. Though Gopala did not have royal antecedents, he succeeded in acquiring a kingdom. Gopala’s political authority was soon recognised by several independent chiefs. His original kingdom was in Vanga or East Bengal.

Gopala I was succeeded by his son Dharmapala (770–815 CE) who made the Pala kingdom a force to reckon with. Bengal and Bihar were directly ruled by him. Kanauj was ruled by his nominee. The rulers of the Punjab, Rajaputana, Malwa and Berar accepted his suzerainty. He assumed titles like Paramesvara, Parambhattaraka and Maharajadhiraja.

Dharmapala proved to be a great patron of Buddhism. He founded the Vikaramasila monastery in Bhagalpur district in Bihar, which developed into a great centre of Buddhist learning and culture. He built a grand vihara at Somapura in modern Paharapura (present-day Bangladesh). Dharmapala also built a monastery at Odantapuri in Bihar. He patronised Harisbhadra, a Buddhist writer.

Dharmapala’s son Devapala extended Pala control eastwards up to Kamarupa (Assam). He defeated Amoghavarsha, the Rashtrakuta ruler, by allying with all the states that regarded the Rashtrakutas as their common enemy. Devapala was also a great patron of Buddhism. He granted five villages to Balaputradeva, the king of the Sailendra dynasty of Suvarnadipa (Sumatra), to maintain a monastery built by him at Nalanda. Nalanda continued to flourish as the chief seat of Buddhist learning even during the Pala reign.

Devapala was succeeded by Vigramapala, who abdicated his throne after ruling for a few years and went to lead an ascetic life. Narayanapala, son of Vigramapala, was also a man of pacific and religious disposition. The Rashtrakutas and the Pratiharas took advantage of Narayanapala’s disposition and defeated the Palas. The rise of the Pratiharas in Jalore under Mihira Bhoja and the advance of the Rashtrakutas into Pala territories inevitably brought about the decline of the Palas. The petty chiefs, who formerly owed allegiance to the Palas, also started asserting their independence.

The slide of the Pala dynasty was accelerated during the rule of his three successors – Rajyapala, Gopala III and Vigramapala II. The fortunes of the dynasty, however, were revived by Mahipala I, son of Vigramapala II. The most important event of his period was the invasion of northern India by Rajendra Chola sometime between 1020 and 1025 CE. However, the advance of the Cholas beyond the Ganges was checked by Mahipala I.

After 15 years of Mahipala’s rule, four insignificant rulers followed. Ramapala was the last ruler who tried to recover the lost glory of the dynasty. He ruled for about 53 years and after his death, the presence of Pala dynasty was confined to only a portion of Magadha (Bihar) and continued to exist only for a short period. Vijayasena of the Sena dynasty who had become powerful by then in northern Bengal expelled the last ruler Madanapala (1130–1150 CE) from Bengal and established his dynastic rule.

The Palas were great patrons of Mahayana Buddhism. The Buddhist philosopher Haribhadra was the spiritual preceptor of Dharmapala, the founder of the Pala kingdom. Bengal remained one of the few places where Buddhist monasteries continued to exist. The kingdom as well as Buddhism soon suffered decline because of large-scale conversion of merchants and artisans to Islam.

Two artists of this period were Dhiman and his son Vitapala. They were great painters, sculptors and bronze statue makers. The Pala school of sculptural art was influenced by the Gupta art. Mahipala I constructed and repaired several sacred structures at Saranath, Nalanda and Bodh Gaya. Gopala founded the famous monastery at Odantapura (Bihar). Dharmapala established the Vikramashila and the Somapura Mahaviharas (Bangladesh). 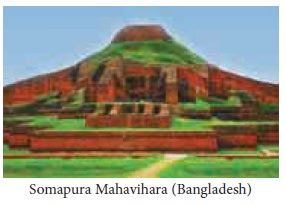 The prominent Buddhist scholars of Vikramashila and Nalanda universities were Atisha, Saraha, Tilopa, Dansheel, Dansree, Jinamitra, Muktimitra, Padmanava, Virachan and Silabhadra. The notable Pala texts on philosophy include Agama Shastra by Gaudapada, and Nyaya Kundali by Sridhar Bhatta. Many texts on medicine were compiled by Chakrapani Datta, Sureshwar Gadadhara Vaidya and Jimutavahana. The Palas also patronised Sanskrit scholars. Many Buddhist tantric works were authored and translated into Sanskrit. The original tantric works comprise a varied group of Indian and Tibetan texts. The “Mahipalageet” (songs on Mahipala), a set of folk songs, are still popular in the rural areas of Bengal. Sandhyakar Nandi’s epic Ramacharitam, a biography of a later Pala ruler Ramapala, describes how forest chiefs were brought into their alliance through lavish gifts. 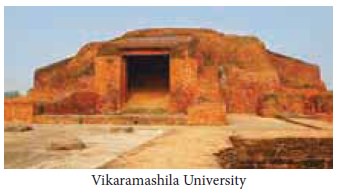