Rig Vedic Samhita is the earliest text that relates to the Early Vedic period.

Rig Vedic Samhita is the earliest text that relates to the Early Vedic period. The Early Vedic culture is placed between 1500 BCE and 1000 BCE. The political, social and economic aspects of life of this period are reflected in the Rig Vedic hymns.

In the Indian subcontinent, the early Aryans lived in the area of eastern Afghanistan, Pakistan, Punjab and fringes of Western Uttar Pradesh.

The Rig Vedas speak about not only the Aryans, but also about the non-Aryan

people, whom the Aryans encountered in India. When the Rig Vedic people moved into India they came into conflict with people whom they referred to as Dasyus or Dasas. Evidently the Aryans differentiated themselves from the dark native people who had different cultural practices, and sought to maintain their distinction.

The Rig Veda has references to several other groups. Simyu and Kikata are grouped with the dasyus. Sambara son of Kulitara is mentioned as a chief with 90 forts or settlements. Varchin was another chief with many troops. The Rig Veda mentions the defeat of a chief called Sambara by Divodasa of the Bharata clan.

The concept of polity developed in the Rig Vedic time. Various units of habitation and divisions such as the janas, vis, gana, grama and kula are referred to in the Rig Veda. The Vedas speak about the Aryans and their enemies and the battles they fought with them. 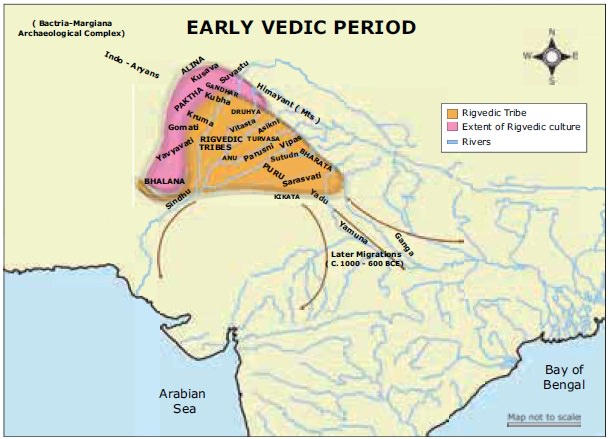 The battles were fought more for cattle and material wealth and the war booty acquired was shared. They not only fought with the non-Aryans, but also fought among themselves. They invoked the support of the gods in their battles. They strongly believed that prayers, sacrifices and rituals could offer support in their mundane life. The god Indra is called Purandara, which means destroyer of settlements, which were perhaps fenced or planned townships.

The Bharatas and Tritsu were the ruling Aryan clans who were supported by Vasishta, the priest. The region of India was named Bharata Varsha after the tribe of Bharatas. The Bharata clan was opposed by ten chiefs and five out of them were Aryans. This battle was known as the Battle of Ten Kings. The battle took place on the banks of the river Paurushni, identified with the river Ravi. In this battle, Sudas won and he became important leading to the dominance of Bharata clan. The Purus were one of the defeated clans. The Purus and Bharatas formed an alliance and later they formed Kuru clan. Later the Kurus allied with Panchalas and established their control over the Upper Ganga Valley.

The Vedic people distinguished themselves from the non-Aryan people. Varna was the term used by Aryans to refer to colour and category. The Rig Veda refers to Arya varna and Dasa varna. The Dasas and Dasyus were conquered and treated as slaves. They came to be considered sudras in the later period. Social classes were classified as warriors, priests and common people. Sudras as a category of people appeared at the end of the Rig Vedic period. Slaverywas common and slaves were given as gifts to the priests, but there is no reference to wage labour. Horse-drawn chariots and bronze objects were possessed by a few, suggesting social distinction. Vedic society was largely egalitarian initially, and social distinctions emerged later. According to the Purusha Sukta of the Rig Veda the various varnas emerged thus: Brahmanas from the mouth, the kshatriya from the arms, the vaisya from the thighs and the sudra from the feet of Purusha, when he was sacrificed. These social divisions are considered to have arisen towards the end of the early Vedic period. Various professional groups such as warriors, priests, cattle-keepers, farmers, barbers are also mentioned. Panis were itinerary traders or perhaps caravan traders. Panis are also seen as enemies in some verses.

Kinship was the basis of the social structure of Rig Vedic society. People were identified with specific clans and the clans formed the tribe or jana. The term jana occurs in the Rig Veda 21 times but janapada does not occur even once. The term vis, which refers to the common people, occurs 170 times and they lived in gramas (villages). The family (griha) was the main social unit within the tribe. It was headed by the grihapati and his wife was known as sapatni. And the family at that point of time was perhaps a joint family.

Women had a respectable position but it is not possible to generalise about this. Society was essentially patriarchal with a preference for male children and cattle. The birth of a son was preferred perhaps because of the martial nature of the society, which required male members for their clashes to establish dominance

over the territories. Having ten sons was considered as a blessing. Women attended assemblies and offered sacrifices. Marriage was common but primitive practices were also continued. Polyandry seems to have existed, and widow remarriage was also known. People married at the age of 16–17, according to scholars, and there is little evidence of child marriage.

Archaeological evidence points to the development of agriculture among the Rig Vedic people. The ploughshare is mentioned in the Rig Vedas. The field was known as kshetra and the term krishi referred to ploughing. The terms langla and sura referred to plough and the term sita meant the furrow created by ploughing. Water for irrigation was probably drawn from wells by cattle-driven water-lifts using pulleys. They had knowledge of different seasons, sowing, harvesting and thrashing. They cultivated barley (yavam) and wheat (godhuma).

Cattle rearing was an important economic activity for the Aryans, although they practiced agriculture. Cattle were considered wealth. The term for war in the Rig Veda was gavishthi which means search for cows (which is the contemporary term (goshti) for factions as well). The donations to the priests were mainly cows and women slaves but not land, which reveals the importance of pastoralism. There was no private property in land.

The Rig Veda mentions artisans such as carpenters, chariot-makers, weavers and leather-workers. Copper metallurgy was one of the important developments of this period. The term ayas in the Rig Veda refers to copper and bronze. Karmara, smith, is mentioned in the Rig Veda. Likewise, there are references to siri or yarn, indicating spinning which was done by women and to carpenters, takshan. Weaving of clothes of wool is also referred to and obviously it was necessary in the cold weather. Some of the crafts were fulltime crafts, involving specialists.

Trading activities were limited though traders were present during the Early Vedic period. Panis are referred to as traders and they were perhaps caravan traders. The word pan means barter, which was a mode of exchange. Nishka was a gold or silver ornament used in barter. A priest received 100 horses and 100 nishka as fee for sacrifices. The danas and dakshinas offered to people were means of redistributing resources. The dakshina was both a fee for a specific service and also a means of distributing wealth. The distribution of cows helped spread pastoral activities and economic production.

Bullock carts, horses and horse-drawn chariots were used for transport. There are references to the sea (samudra) and boats (nau). Boats driven by 100 oars are mentioned.

The polity of the Rig Vedic period was that of a tribal society. The chief of the tribe was the main political head and he was called rajan. The kings lived in multi-pillared palaces. They offered gifts of cattle, chariots and horse ornaments and gold to the priests. Rajan was a hereditary chief. He was perhaps elected by the assembly called samiti. The main duty of the king was to protect the tribe. He protected wealth, fought wars, and offered prayers on behalf of gods. The king had authority over the territory and people.

Vedic society was militaristic. Bows, daggers, axes and lances were the main weapons of war. Tributes and booty collected from war were redistributed by the king. There are also references to gift of dasas or slaves. The king Trasadasyu, the chief of the Purus, gave away 50 women as a gift. The chief was known as gopa or gopati which means, chief of cattle.

The assemblies called sabha, samiti, vidhata and gana are mentioned in the Rig Veda. Sabha was the assembly of elders or the elites, samiti was an assembly of people, and vidhata was the assembly of tribe. They performed military and religious functions. Women attended the sabhas and vidhatas. The king sought the support of the samiti and sabha for his activities. There are debates about the exact nature of these assemblies and functions. Most of our understanding of the conditions of Vedic society depends upon the interpretations of various terms. Sometimes it is hard to reconstruct the original meaning.

The purohita or priest offered advice to the king. Vedic priests advised the kings, inspired them and praised their deeds. In turn they received rewards for their services. Senani was the chief of army. There is no evidence of tax collecting officers. Perhaps people made voluntary contribution called bali to the king. Some scholars say that bali was an imposed tax, and not voluntary. There is no reference to the administration of justice. The officer who controlled the territory was called Vrajapati. He helped the kulapas or heads of fighting groups called gramini. Gramini was the head of the village and fighting unit.

Religion and rituals played an important role in Vedic society. In the Rig Veda, the natural forces sun, moon, rivers, mountains and rains were defined as divinities. The religion was naturalistic and polytheistic. Indra was the most important god and he was called Purandara. Agni was seen as intermediary between god and people. Surya was a god who removed darkness. Ushas was the goddess of dawn. Aditi, Prithvi and Sinivali are other goddesses.

Varuna, the god of water was next in importance. This god was the upholder of natural order. Soma was the god of plants and the drink was named after him. Soma drink was part of the ritual and the preparation of this intoxicating drink is explained in many hymns. Maruts was the god of strength. Interestingly there are few references to Rudra or Siva.

Rituals were adopted as a solution to many issues and the problems of day-to-day life and thus the priests had an important role in the society.

In the early Vedic period lineage and tribes constituted society, and the king had limited power. The various tribal groups of Aryans and non-Aryans fought to control the territories. Social divisions did not take deep root, although the concept of varna and Aryan identities existed. Pastoralism was predominant and cattle centred clashes were common, although agriculture did play an important role. The archaeological sites suggest different types of craft production including metal, carpentry, pottery and clothes.