Adichanallur, 22 km from Tirunelveli, is located in Thoothukudi district.

Adichanallur, 22 km from Tirunelveli, is located in Thoothukudi district. In 1876, a German ethnologist and naturalist, Andrew Jagor conducted an excavation at Adichanallur. He carried with him samples of backed earthenware, utensils of all sizes and shapes, a considerable number of iron weapons and implements, and great quantities of bones and skulls. These are now housed in a Berlin Museum. 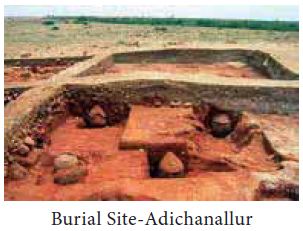 The then district Collector of Tirunelveli A.J. Stuart and the famous linguist Bishop Robert Caldwell visited Adichanallur subsequently, found it was a quartz site. Quarrying was immediately banned and archaeological excavation commenced under the supervision of Alexander Rea. Rea prepared a comprehensive account of his findings, illustrated by photographs, and was published in the annual report of the Archaeological Survey of India (ASI), 1902–03. Nearly a hundred years later, the ASI carried out another excavation and brought out more information. The report is awaited. 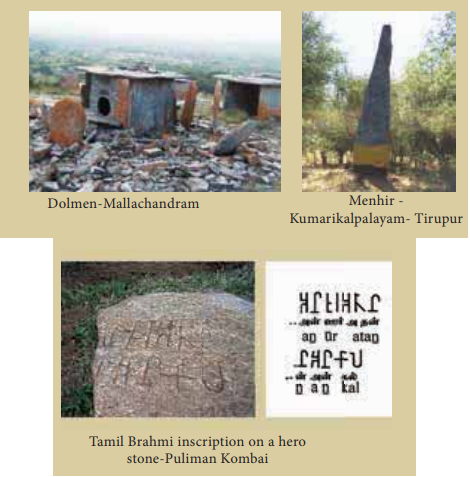 The burial mound at Adichanallur yielded the following:


The engraving of animals on bronze and on ornaments is indicative of the primitive workmanship. (Caldwell could stumble upon a copper bangle during his inspection at the site.) The people were evidently skilful in moulding pottery, in casting or brassing metals, in weaving and in working stone and wood. The presence of husks of rice and millet indicates domestication of these grains. Iron weapons were used for both war, and for animal sacrifices. The discovery of sacrificial implements prompted Caldwell to conclude that the people of Adichanallur were not adherents of Vedic religion.

Paiyampalli is a village in Tirupathur taluk, Vellore district. The Archaeological Survey of India carried out an excavation in the 1960s and unearthed black and red ware pottery in this megalithic site. A large number of urn burials were also found in this region. The date of this culture, based on radio carbon dating, is 1000 BCE.

Kodumanal, 40 km from Erode, is located on the northern bank of Noyyal river, a tributary of the Cauvery. A series of excavations were carried out during the 1980s and 1990s. The most recent was in 2012. In habitation trenches and megalithic burials of Kodumanal, the goods unearthed included pots, weapons, tools, ornaments, and beads, particularly carnelian, akin to those found at Mohenjodaro. Since carnelian was not known to this region in ancient times, it may have been brought to Kodumanal from outside. 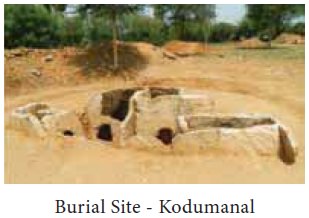 In the Sangam work Pathitrupathu, a place called Kodumanam belonging to the Chera king, is praised for gemstones and therefore some archaeologists argue that Kodumanam is the ancient name of Kodumanal. Hoards of Roman coins have been discovered and it is believed that this is a result of the export of gemstones to the Roman world, resulting in return a huge inflow of gold from the latter into the region.

Conches and bangles, remnants of furnaces, a kiln floor filled with ash soot, and potsherds with Tamil-Brahmi inscriptions are other finds in the site. Pit burials, urn burials and chamber tombs of different types excavated at Kodumanal and the names inscribed on potsherds may indicate habitation by multi-ethnic groups. The graffiti etched on potsherds give a lot of information about the people and their activities. A menhir found at a burial site is assigned to the Megalithic period. According to Y. Subbarayalu, Kodumanal is coeval the Sangam anthologies (second century BCE to second century CE).