The Pre-Harappan cultures are the earliest Chalcolithic cultures of India, and they are found in the time before the beginning of the mature phase of the Harappan culture, and continued to exist in the later period.

The Chalcolithic people also began to domesticate animals in addition to agriculture. They had cattle, sheep, pigs and goats and buffaloes. Evidence has been found of turtles and fowls in their settlements. The houses were made of stone, mud bricks, mud and perishable wooden materials, and built on a stone foundation. Silos (well prepared pits) meant for storage of grains have also been found. The walls were made with bamboo frames. People used black and red ware and black on red ware pottery.

Ochre Coloured Pottery Ware culture is found in northern India dating to the Chalcolithic period. The OCP pottery has red slip and appears ochre in colour (the ochre colour comes off when the pottery is touched) and hence, it is called Ochre Coloured Pottery. It has black painted designs. The OCP comes in the form of jars, storage jars, bowls, and basins. 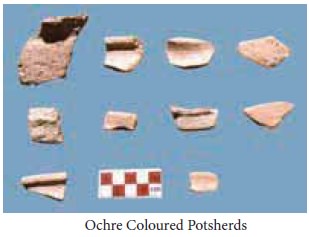 The OCP culture dates to 2600-1200 BCE and is found in the Indo-Gangetic plain and may have had some associations with early Vedic culture. The OCP culture is seen as an impoverished Harappan culture and some scholars see it as unrelated to the Harappan culture. The OCP sites produced copper figures and objects and therefore it is also known as “copper hoard culture.” It is a rural culture and has evidence of the cultivation of rice, barley, and legumes. They also had pastoralism with evidence of cattle, sheep, goats, pigs, horses, and dogs. The villages had wattle-and-daub houses. They used copper and terracotta ornaments. Animal figurines have also been found.

The southern part of India has not produced cultural evidence of a full-fledged chalcolithic culture. Perforated and spouted vessels have been found in some sites. Copper bronze tools like chisels and flat axes occur at these sites. Stone tools continued to be used in this area. Black on red ware pottery is found. These people survived through animal rearing and agriculture. Millets, pulses and horse gram were cultivated, and fruits, leaves and tubers were collected.