Riboflavin is sometimes called B2. It is destroyed by light and irradiation andis unstable in alkalies.

Riboflavin is sometimes called B2. It is destroyed by light and irradiation andis unstable in alkalies.

Functions.Riboflavin is essential for carbohydrate, fat, and protein me-tabolism. It is also necessary for tissue maintenance, especially the skin around the mouth, and for healthy eyes. Riboflavin is absorbed in the small intestine.

Sources.Riboflavin is widely distributed in animal and plant foods but insmall amounts. Milk, meats, poultry, fish, and enriched breads and cereals are some of its richest sources. Some green vegetables such as broccoli, spinach, and asparagus are also good sources.

Requirement.Riboflavin is measured in milligrams. The average adultfemale daily requirement is thought to be 1.1 mg, and the adult male require-ment is 1.3 mg. The riboflavin requirement appears to increase with increased energy expenditure. The requirement does not diminish with age.

Deficiency.Because of the small quantities of riboflavin in foods and itslimited storage in the body, deficiencies of riboflavin can develop. The generous use of fat-free milk in the diet is a good way to prevent deficiency of this vitamin. It is important, however, that milk be stored in opaque containers because riboflavin can be destroyed by light. It appears that fiber laxatives can reduce riboflavin absorption, and their use over long periods should be discouraged.

A deficiency of riboflavin can result in cheilosis, a condition characterized by sores on the lips and cracks at the corners of the mouth (Figure 7-1), glossitis (inflammation of the tongue), dermatitis, and eye strain in the form of itching, burning, and eye fatigue. Its toxicity is unknown. 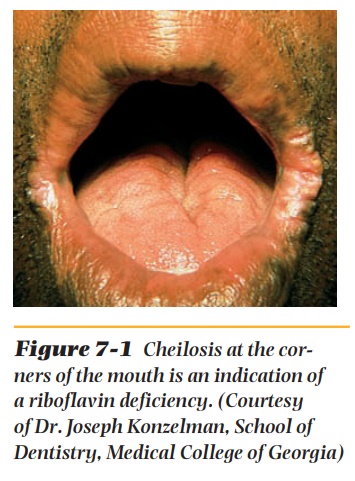