Vitamin deficiencies can occur and can result in disease.

Since 1997, the Food and Nutrition Board of the Institute of Medicine has been establishing Dietary Reference Intakes (DRIs) to replace the Recommended Di-etary Allowances (RDAs) as outlined in Table 7-2. Tolerable Upper Limits (ULs) have also been set for some vitamins and minerals. The UL is the maximum level of daily intake unlikely to cause adverse effects and is not a recommended level of intake. Vitamin allowances are given by weight—milligrams (mg) or micrograms (μg or mcg). 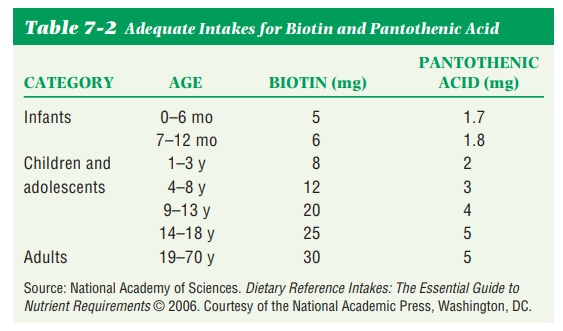 Vitamin deficiencies can occur and can result in disease. Persons inclined to vitamin deficiencies because they do not eat balanced diets include alcoholics, the poor and incapacitated elderly, patients with serious diseases that affect appetite, mentally retarded persons, and young children who receive inadequate care. Also, deficiencies of fat-soluble vitamins occur in patients with chronic malabsorption diseases such as cystic fibrosis, celiac disease, and Crohn’s disease.

The term avitaminosis means “without vitamins.” This word followed by the name of a specific vitamin is used to indicate a serious lack of that partic-ular vitamin. Hypervitaminosis is the excess of one or more vitamins. Either a lack or excess of vitamins can be detrimental to a person’s health.

Vitamins taken in addition to those received in the diet are called vitaminsupplements. These are available in concentrated forms in tablets, capsules,and drops. Vitamin concentrates are sometimes termed natural or synthetic (manufactured). Some people believe that a meaningful difference exists between the two types and that the natural are far superior in quality to the synthetic. However, according to the U.S. Food and Drug Administration (FDA), the body cannot distinguish between a vitamin of plant or animal origin and one manu-factured in a laboratory because once they have been dismantled by the digestive system, the two types of the same vitamin are chemically identical.

Synthetic vitamins are frequently added to foods during processing. When this is done, the foods are described as enriched or fortified. Examples of these foods are enriched breads and cereals to which thiamine, niacin, ribofla-vin, folate, and the mineral iron have been added. Vitamins A and D are added to milk and fortified margarine.

Occasionally, vitamins are lost during food processing. In most cases, food producers can replace these vitamins with synthetic vitamins, making the processed food nutritionally equal to the unprocessed food. Foods in which vitamins have been replaced are called restored foods.

Because some vitamins are easily destroyed by light, air, heat, and water, it is important to know how to preserve the vitamin content of food during its preparation and cooking. Vitamin loss can be avoided by the following:

• Buying the freshest, unbruised vegetables and fruits locally andusing them raw whenever possible

• Heating canned vegetables quickly and in their own liquid

• Using as little water as possible when cooking and having it boiling before adding vegetables, or, preferably, steaming them

• Saving any cooking liquid for later use in soups, stews, and gravies

• Storing fresh vegetables and most fruits in a cool, dark place

• Microwave fruits and vegetables in 1 to 2 tablespoons of water