Retroviruses: Properties of the Virus

The retroviruses are enveloped, mostly spherical viruses that measure 80–120 nm in size.

The retroviruses are enveloped, mostly spherical viruses that measure 80–120 nm in size. The envelope of the virus is acquired by budding from the plasma membrane and contains viral glycoprotein. The virus consists of two identical copies of  linear, single, positive-stranded RNA genome. The virus also contains the cellular transfer RNAs (tRNAs) and the enzymes reverse transcriptase and integrase. The tRNAs are used as primers for the enzyme reverse transcriptase.

The presence of the enzyme reverse transcriptase—an unusual enzyme, which is RNA-dependent DNA polymerase—is the characteristic feature of retroviruses. The enzyme prepares a copy from RNA to DNA, unlike the classical transcription of genetic information from DNA to RNA.

Reverse transcriptase prepares a DNA copy of the retroviral RNA genome, which is initially an RNA–DNA hybrid but later forms a double-stranded DNA provirus. Infection with onco-genic retroviruses leads to integration of the provirus randomly with the host chromosome, and it becomes a cellular gene for the rest of the life of the cell. All the proteins of retroviruses are translated from provirus.

The genome of the simple retroviruses consists of three major genes that encode glycoproteins of the virus. These are gag, pol, and env genes. The gag gene encodes for group-specificantigens, capsid proteins; pol gene for enzymes polymerase, protease, and integrase; and env gene for envelope glycopro-teins. Proteolytic cleavage of the polyprotein encoded by the env gene leads to production of the viral glycoproteins. Forexample, the gp160 of HIV is cleaved into gp41 and gp120, and the glycoprotein gp62 of HTLV-1 is cleaved into gp46 and gp21.

The complex retroviruses, HTLV and the lentiviruses includ-ing HIV consist of several accessory genes, such as tat, rev, nef, vif, vpu for HIV. These genes also encode several regulatoryproteins that require more complex transcriptional processing than the simple retroviruses. Various retrovirus genes and their functions are summarized in Table 67-2. 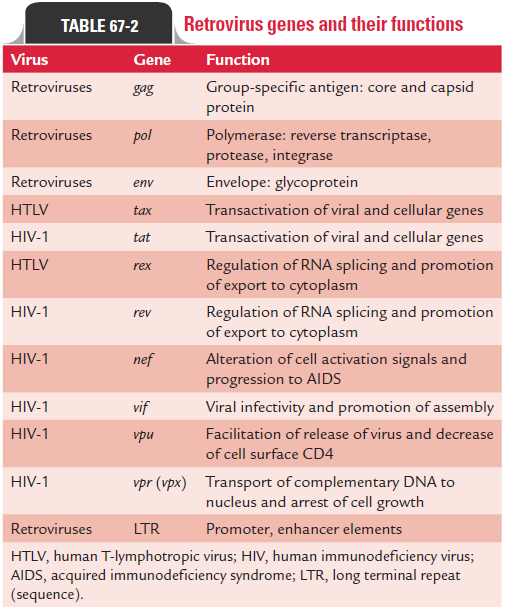 Retroviruses are heat labile, readily destroyed on exposure to heat at 56°C for 30 minutes. The viruses are also readily inacti-vated on treatment with mild acids, ether, and formalin. They are stable on storage at 30°C.