Temperature is one of the fundamental parameters indicating the physical condition of matter, i.e. expressing its degree of hotness or coldness. Whenever a body is heat’ various effects are observed.

Temperature is one of the fundamental parameters indicating the physical condition of matter, i.e. expressing its degree of hotness or coldness. Whenever a body is heat’ various effects are observed. They include

•        Changes in electrical properties, mainly the change in resistance,

•        Generation of an emf at the junction of two dissimilar metals.

Ø The wire resistance thermometer usually consists of a coil wound on a mica or ceramic former, as shown in the Fig.

Ø The coil is wound in bifilar form so as to make it no inductive. Such coils are available in different sizes and with different resistance values ranging from 10 ohms to 25,000 ohms. 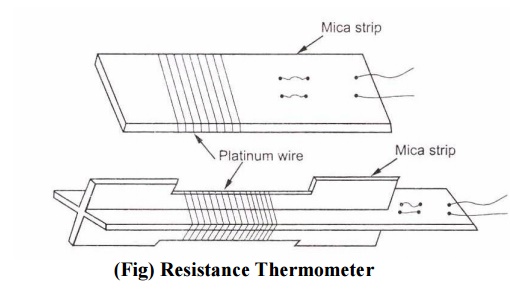 1. The measurement is accurate.

2. Indicators, recorders can be directly operated.

3. The temperature sensor can be easily installed and replaced.

4. Measurement of differential temperature is possible.

6. They are suitable for remote indication.

7. They are smaller in size

8. They have stability over long periods of time.

1. A bridge circuit with external power source is necessary for their operation.

2. They are comparatively costly.

Ø     Thermistor is a contraction of a term ‘ thermal-resistors’ .

Ø     Thermistors are semiconductor device which behave as thermal resistors having negative temperature coefficient [ i.e. their resistance decreases as temperature increases.

Ø     The below Fig. shows this characteristic.

Ø   Thermistors are available in variety of shapes and sizes as shown in the Fig.

Ø     Beads may be sealed in the tips of solid glass rods to form probes.

Ø     Disks and washers are made by pressing thermistor material under high pressure into flat cylindrical shapes.

Ø     Washers can be placed in series or in parallel to increase power dissipation rating.

2. Comparatively large change in resistance for a given change in temperature

1. The resistance versus temperature characteristic is highly non-linear.

2. Not suitable over a wide temperature range.

3. Because of high resistance of thermistor, shielded cables have to be used to minimize interference.

1. The thermistors relatively large resistance change per degree change in temperature [known as sensitivity ] makes it useful as temperature transducer.

2. The high sensitivity, together with the relatively high thermistor resistance that may be selected [e.g. 100k .], makes the thermistor ideal for remote measurement or control. Thermistor control systems are inherently sensitive, stable, and fast acting, and they require relatively simple circuitry.

3. Because thermistors have a negative temperature coefficient of resistance, thermistors are widely used to compensate for the effects of temperature on circuit performance. 4. Measurement of conductivity.

Ø The thermocouple is one of the simplest and most commonly used methods of measuring process temperatures.