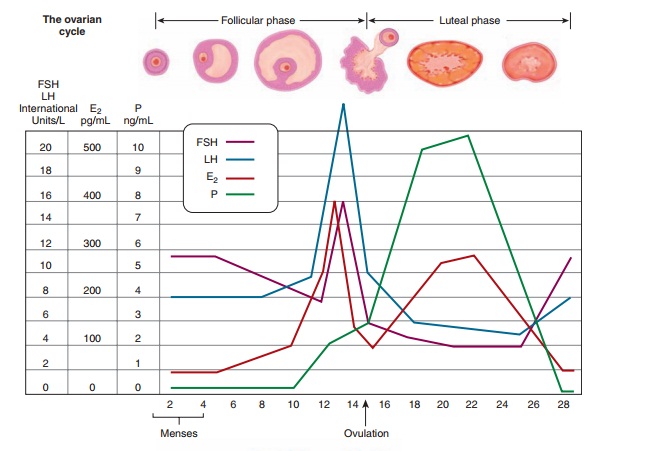 As discussed, the reproductive cycle is divided into three phases: menstruation and the follicular phase, ovulation, and the luteal phase.

Phase I: Menstruation and the Follicular Phase

The first day of menstrual bleeding is considered day 1 of the men-strual cycle. When conception does not occur, the involutionof the corpus luteum and, hence, the decline of proges-terone and estrogen levels cause menstruation. Normal menstruation lasts 3 to 7 days, during which women lose 20 to 60 mL of dark, nonclotting blood. Menstruation consists of blood and desquamated superficial endometrial tissues. Prostaglandins in the secretory endometrium and men-strual blood produce contractions of the uterine vasculature and musculature, which in turn cause endometrial ischemia and uterine cramping. These prostaglandin-associated uterine contractions also aid expulsion of the menstrual blood and tissue. Rising estrogen levels in the early follicu-lar phase induce endometrial healing which leads to cessa-tion of menstruation.

At the end of the luteal phase, serum concentrations of estradiol, progesterone, and LH reach their lowest lev-els. In response to low hormone levels, FSH begins to rise in the late luteal phase before the onset of menstruation to recruit the next cohort of follicles. Thus, during menstrua-tion, follicular growth has already been initiated for the new reproductive cycle. Estradiol levels rise during the follicularphase, causing a decline in FSH. LH remains low in the early follicular phase, but increasing estrogen levels have positive feedback on LH release, and LH starts to rise by the midfollicular phase. Although several follicles begin the maturation process, only the follicle with the greatest number of granulosa cells and FSH receptors and the highest estradiol production becomes the dominant folli-cle; the nondominant follicles undergo atresia.

As the dominant follicle secretes an increasing amount of estradiol, there is marked positive feedback to the pituitary gland to secrete LH. By days 11 to 13 of the cycle, the LH surge occurs, which triggers ovulation. The LH surge begins 34 to 36 hours prior to ovulation, and peak LH secretion occurs 10 to 12 hours prior to ovulation. With the LH surge, the granulosa and theca cells undergo distinct changes and begin production of progesterone. Meiosis of the primary follicle resumes after the LH surge and the first polar body is released; the oocyte then arrests in metaphase of the second meiotic division until fertilization occurs.

During ovulation, the oocyte is expelled from the follicle, and the follicle is converted into the corpus luteum.

The luteal phase of the menstrual cycle is characterized by an alteration in the balance of sex steroid secretion from predomi-nance of estrogen to predominance of progesterone. The processof follicular development has led to increased numbers of LH receptors on the granulosa and theca cells. The mid-cycle LH surge stimulates these LH receptors and converts the enzymatic machinery of these cells to produce and secrete progesterone; this process is called luteinization. Progesterone has negative feedback on pituitary secretion of FSH and LH, thus both hormones are suppressed dur-ing the luteal phase. The corpus luteum also produces estradiol in a pattern that parallels progesterone secretion.

Reproductive cycle changes in gonadotropins, steroid hormones, ovarian follicles, and the endometrium are sum-marized in Figure 33.4. 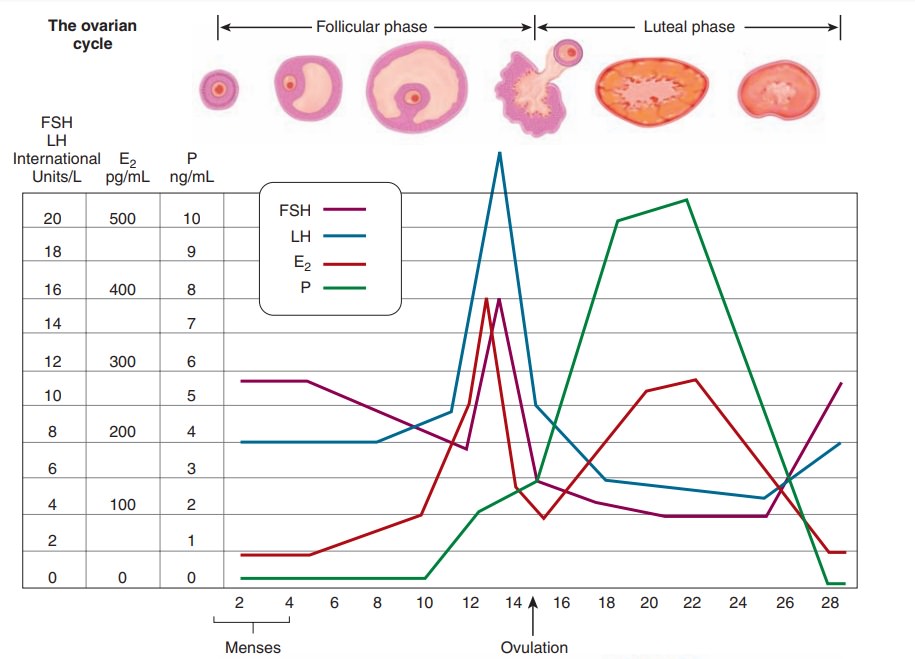