Hormonal changes induced by the hypothalamic-pituitary-ovarian axis and the adrenal gland trigger puberty, and hormones continue to exert a cyclic influence until a woman reaches menopause.

Hormonal changes induced by the hypothalamic-pituitary-ovarian axis and the adrenal gland trigger puberty, and hormones continue to exert a cyclic influence until a woman reaches menopause. At that time, the lack of cyclic ovarian function results in the permanent cessation of menstruation.

Various female structures undergo changes in response to the reproductive cycle hormones: the endometrium and endocervix, breasts, vagina, and the hypothalamus. Changes in the endo-cervix and breasts can be directly observed. Daily assess-ment of basal body temperature can identify changes in the hypothalamic thermoregulation center. Other changes can be assessed by cytologic examination of a sample from the vaginal epithelium or histologic evaluation of an endome-trial biopsy. A careful history may identify symptoms asso-ciated with hormone effects, such as abdominal bloating, fluid retention, mood and appetite changes, and uterine cramps at the onset of menstruation.

The endocervix contains glands that secrete mucus in response to hormonal stimulation. Under the influence of estrogens, the endocervical glands secrete large quantities of thin, clear, watery mucus. Endocervical mucus produc-tion is maximal at the time of ovulation. This mucus facili-tates sperm capture, storage, and transport. With ovulation, progesterone reverses the effect of estrogen on the endo-cervical mucus, and mucus production diminishes.

Some women monitor their cervical mucus to optimize the timing of intercourse when trying to conceive or in order to avoid conception. However, the timing of these changes is nonspecific and is an unreliable method of contraception

Estrogen exposure is necessary for pubertal breast devel-opment; however, reproductive cycle changes in the breast occur primarily due to progesterone effect. The ductal elements of the breast, nipple, and areola respond to progesterone secretion. Some women will notice more breast tenderness and fullness in the luteal phase due to progesterone-mediated changes.

Estrogen promotes growth of the vaginal epithelium and maturation of the superficial epithelial cells of the mucosa. During sexual stimulation, the presence of estrogen aids vaginal transudation and lubrication, which facilitates inter-course. During the luteal phase of the reproductive cycle, the vaginal epithelium retains its thickness, but the secre-tions are markedly diminished.

Since the basal body temperature assumes basal conditions at rest, it should be performed immediately in the morning upon awakening, prior to any activity.

Special thermometers with an expanded scale are available for this purpose. Identification of this characteristic bipha-sic curve provides retrospective, indirect evidence of ovula-tion; however, some ovulatory women do not demonstrate these changes (see Fig. 33.2) 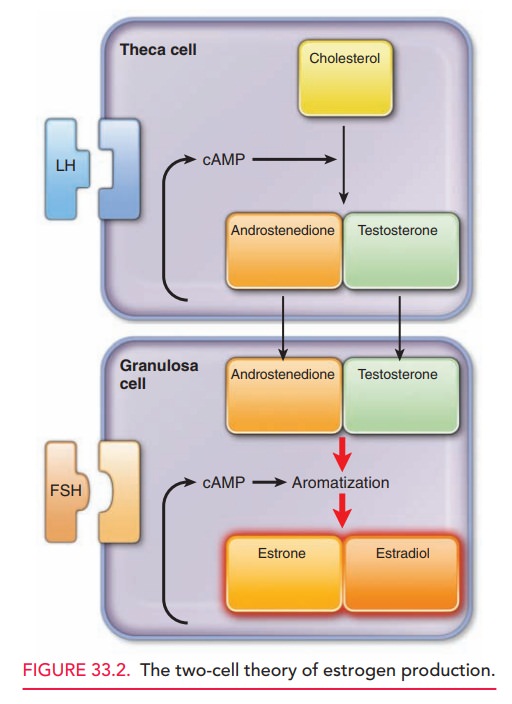