Zoology : Reproduction in Organisms - Questions and choose the correct answer

1. In which type of parthenogenesis are only males produced?

2. Animals giving birth to young ones:

3. The mode of reproduction in bacteria is by

a) Formation of gametes

4. In which mode of reproduction variations are seen

In each of the following questions there are two statements. One is assertion (A) and other is reasoning (R). Mark the correct answer as

A. If both A and R are true and R is correct explanation for A

C. If A is true but R is false

I. Assertion: In bee society, all the members are diploid except drones.

Reason: Drones are produced by parthenogenesis.

II. Assertion: Offsprings produced by asexual reproduction are genetically identical to the parent.

Reason: Asexual reproduction involves only mitosis and no meiosis.

III. Assertion: Viviparous animals give better protection to their offsprings.

Reason: They lay their eggs in the safe places of the environment.

6. Name an organism where cell division is itself a mode of reproduction.

Amoeba reproduces by fission, that is by cell division itself a mode of reproduction.

7. Name the phenomenon where the female gamete directly develops into a new organism with an avian example.

The phenomenon is Parthenogenesis. Turkey is the bird in which the female gamete directly develops into a new organism.

8. What is parthenogenesis? Give two examples from animals

• The egg develops into a complete individual without fertilization is known as parthenogenesis.

9. Which type of reproduction is effective -Asexual or sexual and why?

• In asexual reproduction there is no variation.

• In sexual reproduction due to fusion of two gametes, variation is found.

10. The unicellular organisms which reproduce by binary fission are considered immortal. Justify.

• Amoeba is an unicellular organism, which is considered as immortal.

11. Why is the offspring formed by asexual reproduction referred as a clone?

• The offsprings formed by asexual reproduction is genetically identical to the parent.

• They can also be referred as a clone.

• Clone is the exact copy of an organism which it is developed.

• The offsprings of the viviparous organism develops within the female.

• The offsprings of the oviparous organisms develops in the external environment.

• There are certain external environment factors that affects the development of the offsprings.

• Hence offsprings of the oviparous animals are at greater risk.

13. Give reasons for the following:

(a) Some organisms like honey bees are called parthenogenetic animals

(b) A male honey bee has 16 chromosomes where as its female has 32 chromosomes.

a) Organisms like honey bees can reproduce without fertilization.

• That is why male has 16 chromosomes in the egg

• The female are diploid having 32 chromosomes, 16 from male and 16 from female.

14. Differentiate between the following:

• It is a simple binary fission type.

• In plasmodium multiple fission occurs in the schizont and in the oocyte stage.

• Multiple fission in schizont stage is called schizogony and it is called merozoites.

(b) Budding in yeast and budding in Hydra

• It is an asymmetrical division.

• The bud grows and enlarges.

• The nucleus also splits and enters the bud.

• It is an exogenous budding.

• Along with endoderm they form a bud.

• The gastrovascular cavity of the parent continues in the bud

• The bud separates and develops into hydra.

(c) Regeneration in lizard and Planaria

• It is epimorphosis type of regeneration.

• It is replacement of the lost part.

• It is restorative regeneration.

• It is morphallaxis type of regeneration.

• New planaria can develop from a small fragment of it.

• The developed plaparia will be an active individual.

15. How is juvenile phase different from reproductive phase?

• It is the period of growth between the birth of the individual upto reproductive maturity.

• The juvenile stage of certain organisms

• The period in which the organisms are able to reproduce.

• If they reproduce at the particular period of the year it is called seasonal breeders.

• If they are able to reproduce throughout their sexual maturity it is known as continuous breeders. (Eg.) Poultry and Rabbit.

16. What is the difference between syngamy and fertilization?

• It is the fusion of male and female pronuclei after fertilization.

• It confirms the diploid state of the zygote.

• It is the fusion of male and female gamete.

• It refers to the process of confirming fertility. 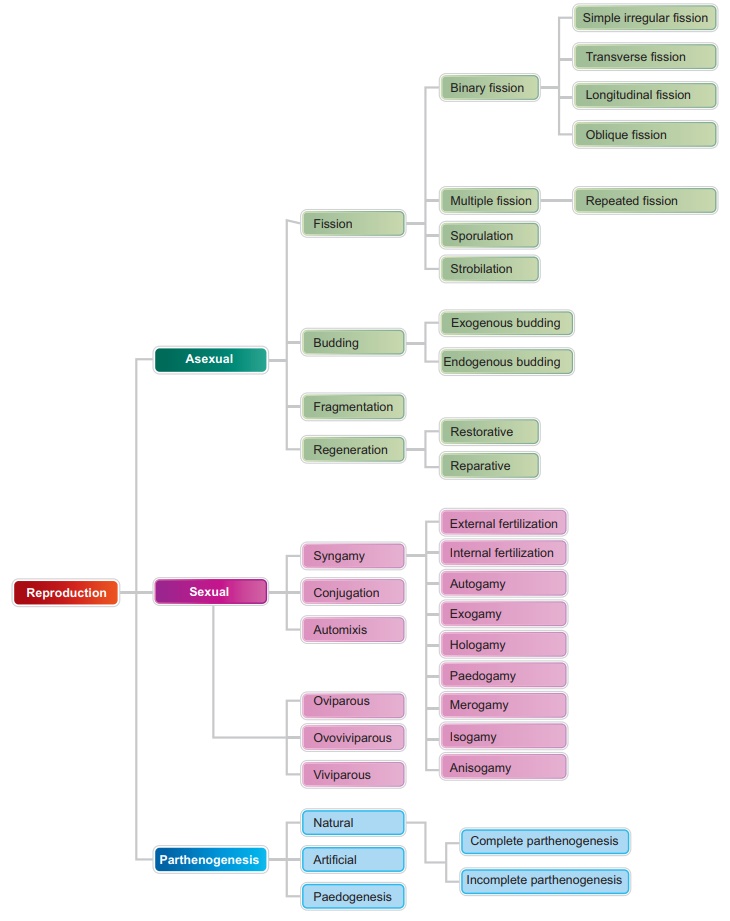