Sexual reproduction involves the fusion of male and female gametes to form a diploid zygote, which develops into a new organism.

In lower organisms, sometimes the entire mature organisms do not form gametes but they themselves behave as gametes and the fusion of such mature individuals is known as hologamy e.g. Trichonympha. Paedogamy is the sexual union of young individuals produced immediately after the division of the adult parent cell by mitosis. In merogamy, the fusion of small sized and morphologically different gametes (merogametes) takes place. The fusion of morphological and physiological identical gametes (isogametes) is called isogamy. e.g. Monocystis, whereas the fusion of dissimilar gametes is called anisogamy (Gr. An-without; iso-equal; gam-marriage). Anisogamy occurs in higher animals but it is customary to use the term fertilization instead of anisogamy or syngamy. e.g. higher invertebrates and all vertebrates.

Conjugation is the temporary union of the two individuals of the same species. During their union both individuals, called the conjugants exchange certain amount of nuclear material (DNA) and then get separated. Conjugation is common among ciliates, e.g. Paramecium, Vorticella and bacteria (Prokaryotes).

Phases of life cycle: Organisms have three phases – Juvenile phase, reproductive phase and senescent phase. Juvenile phase/ vegetative phase is the period of growth between the birth of the individual upto reproductive maturity. During reproductive phase/ maturity phase the organisms reproduce and their offsprings reach maturity period. On the basis of time, breeding animals are of two types: seasonal breeders and continuous breeders. Seasonal breeders reproduce at particular period of the year such as frogs, lizards, most birds, deers etc., Continuous breeders continue to breed throughout their sexual maturity e.g. honey bees, poultry, rabbit etc., Senescent phase begins at the end of reproductive phase when degeneration sets in the structure and functioning of the body.

Animals are classified mainly into three groups namely – Oviparous, Viviparous and Ovoviviparous depends on the site of development of embryo and whether they lay eggs (unfertilized or fertilized) or give birth to young ones. 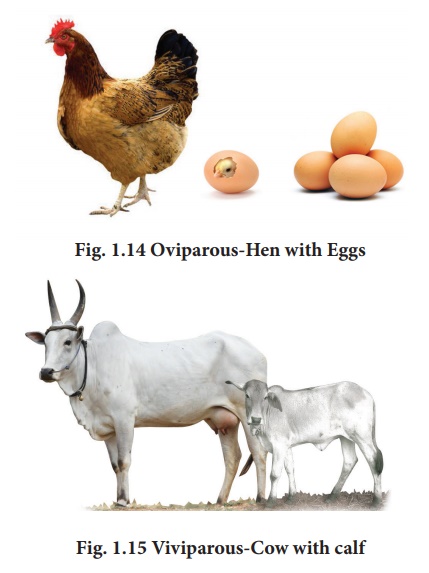 In Oviparous (Fig 1.14) (L., Ovum -egg-, Parere- to produce) animals (egg laying animals), the young hatch from eggs laid outside the mother’s body. e.g. reptiles and birds (their eggs are covered by hard calcareous shells), invertebrates, fishes and amphibians (eggs are not covered by hard calcareous shells but covered by a membrane). Viviparous (Fig 1.15) (L., Vivus - alive, Parere - to produce) animals give rise to young ones.

Viviparity is a type of development in which the young ones are born alive after being nourished in the uterus through the placenta. Majority of mammals including human beings are viviparous. In Ovoviviparous animals, the embryo develops inside the egg and remains in the mother’s body until they are ready to hatch (Fig 1.16). This method of reproduction is similar to viviparity but the embryos have no placental connection with the mother and receive their nourishment from the egg yolk. Ovoviviparity is seen in fishes like shark. 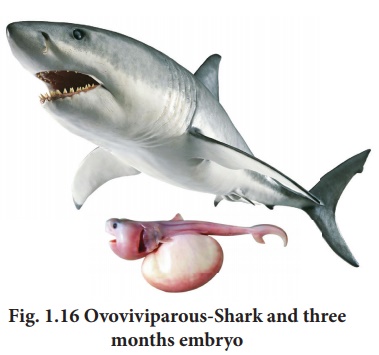 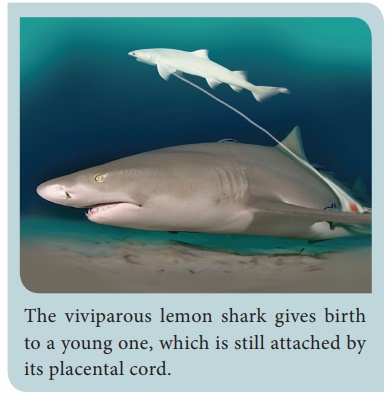