All bryophytes have antheridia with sperm and archegonia with eggs. Antheridia are spherical to oblong bags of sperm and archegonia cylindrical with a bulbous base containing the egg. They may be scattered along stems or clumped at the stem tips. Sperms are motile and require water. Some have sterile hairs interspersed with the sex organs and a few have explosive dispersal of the sperms.

The sporophyte of liverworts

This is short-lived and consists of a foot embedded in the gametophyte, a colorless stalk and a roundish capsule, usually black. Almost all nutrients come from the gametophyte. The capsule splits into four valves at maturity and usually has sterile hairs (elaters) that aid spore dispersal. Some have reduced sporophytes.

The sporophyte of hornworts

This consists of a long-lived foot and capsule only. The capsule is green and photosynthetic, cylindrical to 4 cm, with a central column and elaters. Spores disperse when it splits from the tip.

The sporophyte of mosses

Typical mosses have a foot, a strong stalk and capsule. A protective calyptra from the gametophyte may persist until maturity. The tip of the capsule has peristome teeth that open and close with different humidity dispersing the spores. Details of capsule structure distinguish species. Bog mosses and rock mosses have a capsule borne on an outgrowth from the gametophyte. In bog mosses spores disperse explosively; in rock mosses, the capsule splits.

All bryophytes have antheridia which produce motile sperm and archegonia containing eggs. The structure of these organs is fairly uniform across the threegroups of bryophytes and more elaborate than in other plant groups. The antheridia (Fig. 1) are near-spherical to ovoid sacs on short stalks with a wall one cell thick enclosing sperm mother cells and eventually the sperms. The sperms themselves have two flagella and can only swim a very short distance, but in some species the sperm mother cells are dispersed passively in water first. The archegonia (Fig. 2) are cylindrical with an inflated base. A jacket of sterile cells encloses the egg in the inflated basal part and approximately 10 canal cells in the neck above, that degenerate at maturity. Archegonia are usually on short stalks. These sex organs range in size from about 0.1 mm long in most species up to about 1.5 mm for a few archegonia.

In most liverworts and some mosses the sex organs are scattered along the stems, but in others they are clustered at the branch tips in ‘inflorescences’ which may be surrounded by a cup-like cluster of leaves making them conspicuous. Sterile hairs may be associated with clusters of either sex organ and these help retain water and perhaps aid dispersal. In some thallose liverworts and hornworts, antheridia are sunk in pits and sperms are discharged explosively. Hornworts also have small sunken archegonia. The most striking sexual reproductive structure is the archegonial stem in some thallose liverworts. This is approximately 2 cm long and looks like a small parasol with the archegonia on the underside; antheridia are produced on the upper side of a similar but smaller structure. 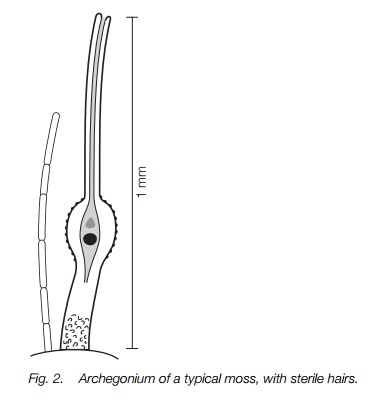 Some bryophytes are monoecious, bearing male and female organs and, in these, capsules are often abundant. In dioecious bryophytes, each plant bearing only male or female organs, sporophyte formation is often rare.

The sporophyte of liverworts

There are three parts to the typical liverwort sporophyte: a foot embedded in the gametophyte; a colorless stalk up to about 2 cm long; and a capsule, 0.5–2 mm across and usually glossy black, at the tip (Fig. 3). It is short-lived, normally lasting only a few days. The foot is embedded in the gametophyte and draws nutrients from it throughout the life of the sporophyte. When the spores are mature the capsule wall splits into four valves. Spores are mixed with sterile hairs, known as elaters, that assist in spore dispersal as they have spiral thickening and respond to drying out by jerky contracting movements. In humid conditions they lengthen and fewer spores are dispersed. Details of the form of the sporophyte can be used as reliable, if microscopic, characters to distinguish liverwort groups and particular species. 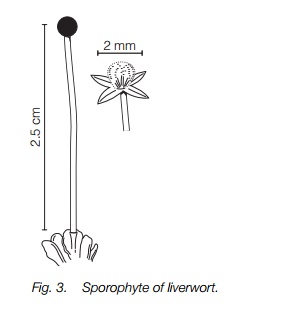 The sporophyte of hornworts

This has a large foot, no stalk but a cylindrical capsule 2–4 cm long directly on the foot (Fig. 4). They last for several weeks, unlike that of liverworts, growing from the base and can outlive the gametophyte. The capsule is green and photosynthetic with stomata on the outside, so does not rely solely on the gametophyte for its growth. There is a column of non-reproductive cells with attached elaters in the middle. Spores mature in the hollow part around the column and are dispersed when the capsule wall splits in two starting at the tip. The capsule wall, the central column and the elaters all twist and aid dispersal. Frequently, the capsule continues growing from the base when spores are being dispersed from the tip.

The sporophyte of mosses

There are three different groups of mosses, typical mosses, bog mosses, and rock mosses, and they differ mainly in the structure of the sporophyte. The typical mosses (the great majority) have a sporophyte that lasts for several weeks (Fig. 5). There is an anchoring foot embedded in the gametophyte, a tough stalk that elongates early in the sporophyte’s life and persists, and a capsule. As the sporophyte grows there is often a cup-like piece of the gametophyte derived from the archegonium, known as the calyptra, attached to the capsule. This protects the developing sporophyte and may fall only when the capsule is fully mature. The capsule is usually photosynthetic and has stomata and a central column of sterile tissue. There is a lid at the tip of the capsule that is thrown off when the capsule is mature. Inside this most have one or two 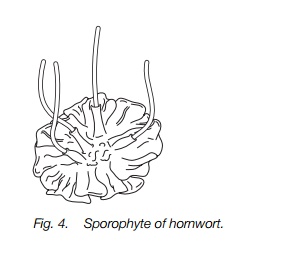 layers of teeth, the peristome, the number and arrangement distinguishing different genera. They respond to humidity with movements that open the capsule for spore dispersal in dry weather and close it in wet weather, or by a twisting movement, or active throwing out of the spores by a combination of outer and inner teeth sticking together.

One unusual family of typical mosses, the Splachnaceae, lives mainly on dung and its spores are dispersed by flies. Their extraordinary sporophytes have long stalks up to 10 cm long, and a swollen base of the capsule which can be up to 2 cm across and brightly colored resembling a toadstool. These produce an odor that attracts flies which carry off the sticky spores to another dung heap.

In bog mosses (Sphagnum) and rock mosses (Andreaea; a group of small almost black mosses that grow encrusted on mountain rocks), the capsule has no stalk but is raised on an outgrowth of the gametophyte (Fig. 5). In Sphagnum the capsule is a brown spherical structure about 2 mm across, in which air pressure builds up as it dries until the tip is explosively blown off and the spores are discharged. In Andreaea the capsules are tiny, some only about 0.5 mm across, and they split into four sections except at the base and the tip. The cracks gape in dry weather to disperse the spores. 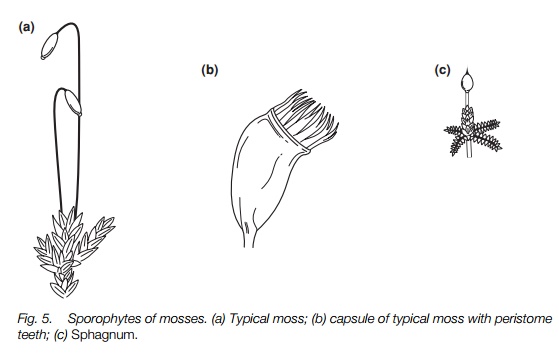