Algae are classified using differences in reproductive structures, cell wall structure and storage products. There are many groups with no clear affinities.

The variety of algae

Algae are classified using differences in reproductive structures, cell wall structure and storage products. There are many groups with no clear affinities. Unicellular groups include the planktonic diatoms and dinoflagellates responsible for most photosynthesis in the seas. Most are haploid and reproduce mainly asexually.

They are mainly multicellular and characteristic of deep inshore waters with low light. Unicellular and filamentous forms occur. Reproduction involves a gametophyte and two different sporophyte generations. One or more of these generations can be reduced. The gametes are non-motile.

These are the largest and most complex seaweeds, dominating many intertidal regions. All are multicellular, some with holdfast, stipe and lamina. Reproduction involves a gametophyte and sporophyte, with both generations looking similar or the gametophyte reduced, in some to a gamete. Vegetative fragmentation is important in Sargassum and others.

This is a highly diverse group, sharing features with the land plants. There are unicellular and multicellular forms. Sexual reproduction normally involves an alternation of similar generations or with either the sporophyte or the gametophyte much reduced. Members of the most complex group, the stoneworts, have a well differentiated body and elaborate sex organs.

The variety of algae

There is a large variety of unicellular photosynthetic algae and each group has undergone an independent evolution (Table 1). Classification of the algae is based mainly on their reproduction and the type of chlorophyll, cell wall and storage products in the cells. The affinities of many groups are not clear. All groups are capable of asexual reproduction either by binary fission or by producing spores by mitosis.

Unicellular diatoms and dinoflagellates (Fig. 1) are the main members of the plankton in seas and fresh water, and are responsible for much of the photosynthesis of the oceans, and therefore of the world. Diatoms are enclosed in a silica cell wall consisting of two halves fitting together like a petri dish; these walls have the most intricately sculpted patterns. They form numerous fossils. Dinoflagellate species are responsible for toxic ‘red tides’ and for phosphorescence in the sea. Euglenas (Fig. 1) occur mainly in high nutrient environments in freshwater and are commonly demonstrated in biological laboratories. Some of the unicellular and colonial groups can occur as heterotrophic organisms without chloroplasts and may have affinities with other protists not considered as algae. It is possible that some of these have developed chloroplasts independently, perhaps through engulfing a photosynthetic cell and using the chloroplast (e.g. euglenas, dinoflagellates). 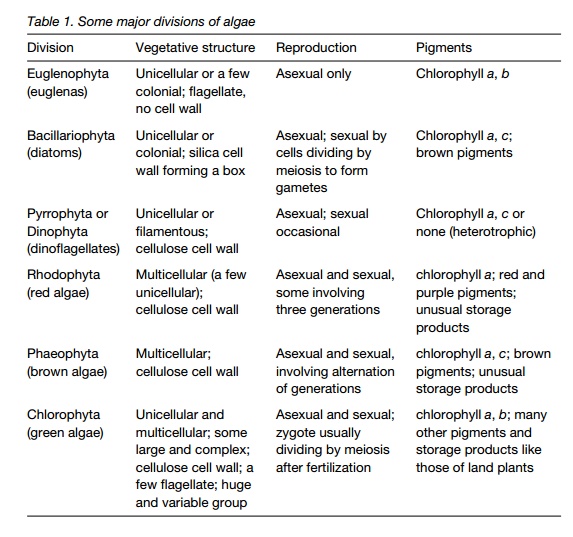 Most unicellular algae are haploid but the diatoms and a few dinoflagellates are diploid. Sexual reproduction involves flagellated sperm cells and the fertilized egg often lies dormant, meiosis taking place when it germinates.

Red algae occur in fresh and sea water and as unicellular and multicellular organisms, but most are multicellular seaweeds occurring in deep offshore waters in dim light. A few are used either as foodstuffs (Porphyra, laverbread) or as the source of agar (mainly Gelidium), a food additive and laboratory gelling agent, made from mucilage in the cell walls. The red or purple pigments absorb most of the available light in the deep waters where they grow, although in strong light this pigment may disappear and the plants appear green. A few secrete calcium-rich exoskeleton which contributes to the formation of coral reefs. 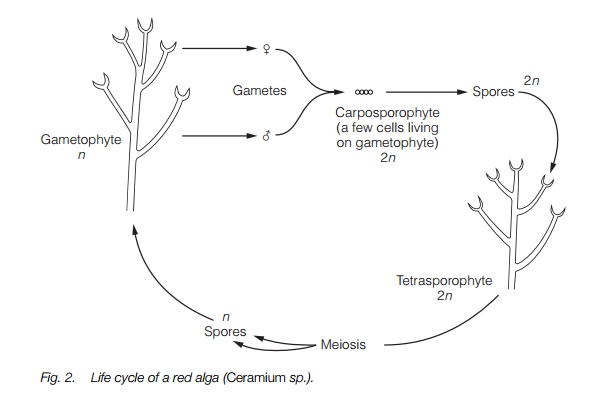 The life cycle and reproduction of red algae is variable and more complicated than that of any other algal group, typically involving one gametophyte and two sporophyte generations (Fig. 2). The first sporophyte is small and normallyremains attached and dependent on the gametophyte, producing diploid spores which disperse to grow into a second sporophyte generation. The gametophyte or the second sporophyte or both may form the main plant. In some species one sporophyte is missing from the life cycle. Uniquely among algae the sperms are non-motile, relying entirely on passive drift to reach the eggs.

These are the largest and most complex algae. They include the great kelps, Macrocystis and Nereocystis, of the Pacific which can grow up to 1 m day–1 and reach 70 m in length. Brown algae are usually the most abundant seaweeds on sea shores; Sargassum forms the basis of life in the mid-Atlantic Sargasso Sea; Laminaria may be hung up by children to detect humidity, while alginates can be extracted to be used as emulsifiers in ice creams and other food stuffs. They also are used occasionally as fodder for domestic animals (e.g. on Irish islands) and as fertilizer. They are flexible but extremely strong to withstand the buffeting of the sea in intertidal zones. Some have a simple filamentous structure, but most are differentiated into a holdfast with no absorptive function, a stipe and a lamina. The lamina of some wrack species, Fucus, includes air bladders, though at times with a rather different gas combination from normal air (high in carbon monoxide). They may secrete toxic polyphenols inhibiting bacterial growth.

Sexual reproduction involves the typical alternation of diploid and haploid generations. These may or may not be alike in morphology, but both large and complex, or the gametophyte much reduced. In the wracks the gametophyte is reduced to gametes only, so there appears to be no alternation of generations and reproduction resembles that of vertebrates. Some brown algae can spread vegetatively by fragmentation, notably in Sargassum, which only reproduces in other ways when attached to the sea bed around coasts.

This large and highly variable group includes unicellular and colonial flagellate forms, such as Volvox (Fig. 3) used in laboratory demonstrations, filamentous forms such as Spirogyra and complex multicellular organisms such as the stoneworts, Chara (Fig. 3). They occur in a wide range of mainly aquatic environments and some are planktonic. They have  many features similar to those of land plants. In multicellular Chlorophyta, alternation of generations may involve both generations looking similar, a reduction of the sporophyte to a single cell or the reduction of the gametophyte to a single cell. The gametes (and sometimes the zygotes) are motile and flagellate; all require an aquatic medium for reproduction and their colonization of land is confined to damp places. Many can also reproduce asexually by diploid spores, again flagellate, sometimes with multiple flagella.

The most complex green algae are the stoneworts, Charales, characteristic of lime-rich fresh water. They can reach 10 cm or more in length and have rhizoidlike cells  that attach the plant to soft substrates, This means that Chara strongly resembles some aquatic flowering plants. Specialized male and female reproductive organs are produced by the branch whorls and are large enough to be visible to the naked eye. The fertilized zygote may undergo meiosis before regenerating the plant body but this is not confirmed and it is not clear whether the main plant is diploid or haploid. The name stonewort derives from secretions of calcium carbonate on the outside of the branches. 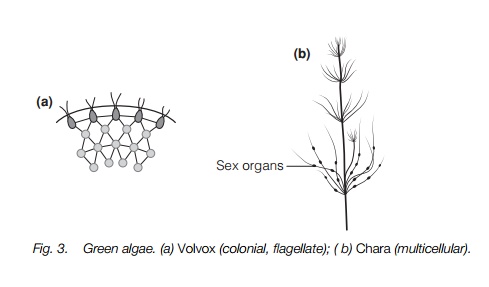