With MIB II, the network manager can obtain information that is purely local to individual devices.

With MIB II, the network manager can obtain information that is purely local to individual devices. That is, in a LAN with a number of devices on it each with an SNMP agent, the manager can learn of the amount of traffic into and out of each device, but cannot easily learn about the traffic on the LAN as a whole. Network monitors are the devices that are traditionally employed to study the network traffic as a whole. They are also called network analyzers, probes etc. They may be standalone devices or may be workstations a server, or a router with additional monitoring functionality. The monitor can produce summary information, including error statistics, such as count of undersized packets and the number of collision performance statistics (packet delivered per second ) etc. The monitor may also store packet for later analysis.

RMON specification is a definition of a MIB. The effect is to define standards network monitoring functions and interfaces for communicating between SNMP based management consoles and remote monitors.

RMON goals as listed in RFC 1757 are given below:

• Off line operation: The monitor should collect fault, performance and configuration information continuously. It accumulates statistics that may be retrieved by the manager at a later time. It may also intimate the manager if an exception occurs.

•        Problem detection and reporting:  Instead of proactive monitoring by running diagnostic

tools, it may check for congestion and error condition passively. When one of these conditions occur, the monitor can log this condition and attempt to intimate the management station.

• Value-added data: The monitor may reduce the work load of management station by performing analysis specific to the data collected on its subnet work. 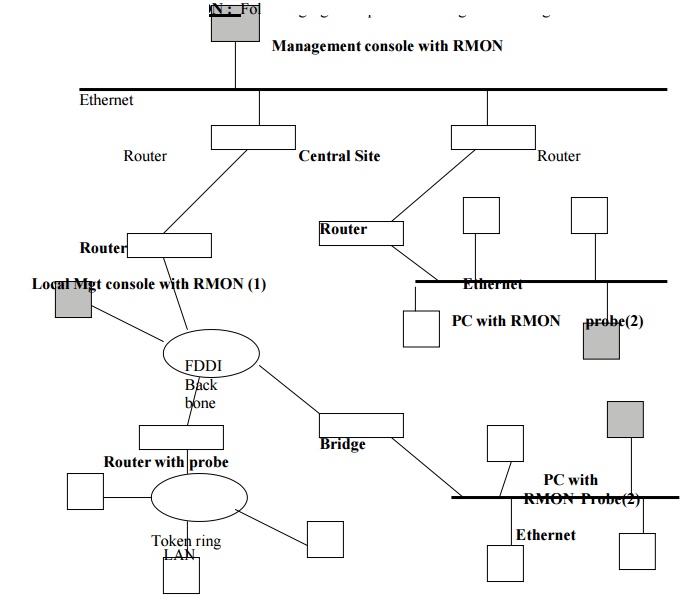 The top of the figure contains a management station with dedicated RMON capability which is attached to the central LAN. ON the two sub network, RMON MIB is implemented in personal computers.(1 & 2). It may be used exclusively for network performance monitoring or may share other functions. There are other RMON elements that are installed on router as well.

A system that implements the RMON MIB is referred to as RMON probe. The probe has an agent similar to SNMP agent. The probe is capable of reading writing the local RMON MIB in response to management action .

The RMON MIB is divided into ten groups

3.    alarm: Allows the management consol user to set a sampling interval and alarm threshold for any counter or integer recorded by the RMON.

4. host: contains counters for various types of traffic to and from hosts attached to the subnetwork.

5.    hostTopN : Contains sorted host statistics that report on the hosts that top a list based on some parameter in the host table.

6.    matrix: shows error and utilization information in matrix form, so the operator can retrieve information for any pair of network addresses.

7.   filter: allows the monitor to observe packets that match a filter

8.   packet captures: governs how data is sent to a management console.

9.   event :  gives a table  of all events generated by the RMON probe.