For a stand alone management station, a manager process controls access to a central MIB and provides interface to the network manager.

Each agent implements SNMP, UDP and IP. For an agent device that supports other application such as FTP, both TCP and UDP are required. Shaded area represents the support provided to network management functions.

Following figure provides further elaborate look at the protocol context on SNMP. From management station three types of SNMP messages are issued on behalf of a management application : getRequest, getNextRequest, setRequest. The first two are variation of get function. All the three messages are acknowledged by the agent in the form of getResponse message. In addition a agent may issue a tap message in response to an event that affects the MIB and the underlying managed resources. 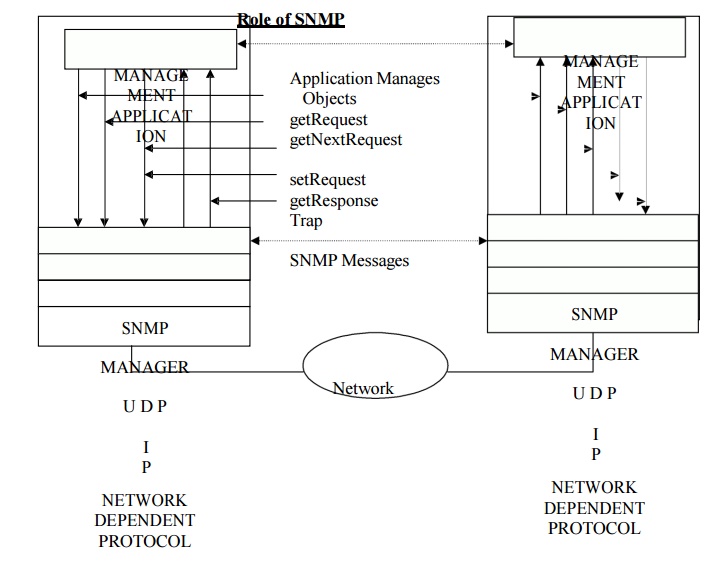 In this at initialization time, and at frequent intervals (Once a day ) a management station can poll all of the agents it knows for some key information such as interface characteristics and for some baseline performance statistics (average number of packets sent) and received over a given period of time. Once this baseline is established, the management station refrains from polling. However any unusual incident is notified by the each agent for example agent crashing and rebooting, link failure, overload condition etc. These events are communicated in SNMP messages known as traps.

Proxies: The use of SNMP requires that all agents, as well as management stations must support a common protocol suite, such as UDP and IP. This limits direct management to such devices such as some bridges , modems that are not part of TCP / IP protocol suit. Similarly a number of PCs, Programmable controllers that do not implement TCP/ IP for which it is not desirable to add SNMP, agent logic and MIB maintenance etc.

To accommodate devices that do not implement SNMP, the concept of proxy was developed. In this scheme an SNMP agent acts as a proxy for one or more other devices. This is shown in the following figure. 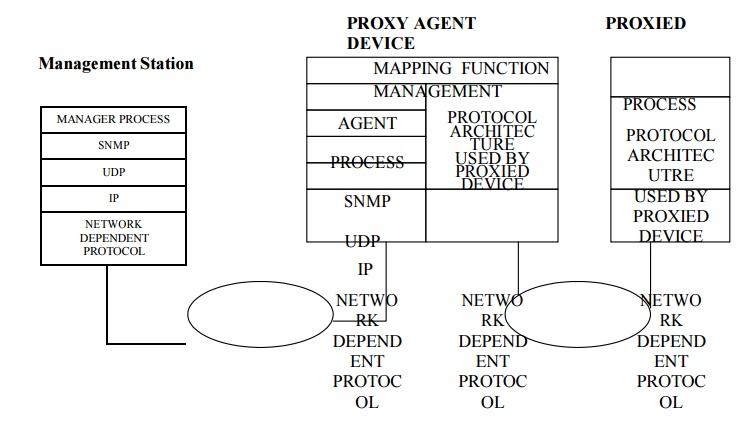