Home | | Pharmaceutical Biotechnology: Fundamentals and Applications | Regular and Rapid Acting Soluble Formulations - Pharmacology and Formulations of Insulin
Posted On :  15.06.2017 11:34 am

Initial soluble insulin formulations were prepared under acidic conditions and were chemically unstable.

The insulin in these neutral, regular formula-tions is chemically stabilized by the addition of zinc (~0.4% relative to the insulin concentration) and phenolic preservatives. As mentioned above, the addition of zinc leads to the formation of discrete hexameric structures (containing 2 Zn atoms per hexamer) that can bind six molecules of phenolic preservatives, e.g., m-cresol (Fig. 2). The binding of these excipients increases the stability of insulin by inducing the formation of a specific hexameric conformation (R ), in which the B1 to B8 region of each monomer is in an α-helical conformation. This in turn decreases the availabil-ity of residues involved in deamidation and high-molecular-weight polymer formation (Brange et al., 1992a,b). 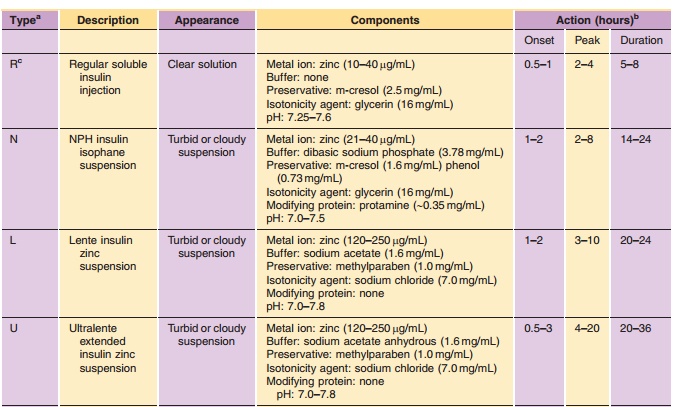 The pharmacodynamic profile of this soluble formulation is listed in Table 2. The neutral, regular formulations show peak insulin activity between 2 and 4 hr with a maximum duration of 5 to 8 hr. As with other formulations, the variations in time-action can be attributed to factors such as dose, site of injection, temperature, and the patient’s physical activity. Despite the soluble state of insulin in these formulations, a delay in activity is still observed. This delay has been attributed to the time required for the hexamer to dissociate into the dimeric and/or monomeric substituents prior to absorption from the interstitium. This dissociation requires the diffu-sion of the preservative and insulin from the site of injection, effectively diluting the protein and shifting the equilibrium from hexamers to dimers and monomers (Fig. 4) (Brange et al., 1990). Recent studies exploring the relationship of molecular weight and cumulative dose recovery of various compounds in the popliteal lymph following sub-cutaneous injection suggest that lymphatic transport may account for approximately 20% of the absorption of insulin from the interstitium (Supersaxo et al., 1990; Porter and Charman, 2000). The remaining balance of insulin is predominately absorbed through capillary diffusion.

Monomeric insulin analogs were designed to achieve a more natural response to prandial glucose-level increases while providing convenience to thepatient. The pharmacodynamic profiles of these soluble formulations are listed in Table 3. The development of monomeric analogs of insulin for the treatment of insulin-dependent diabetes mellitus has focused on shifting the self-association properties of insulin to favor the monomeric species and consequently minimizing the delay in time-action 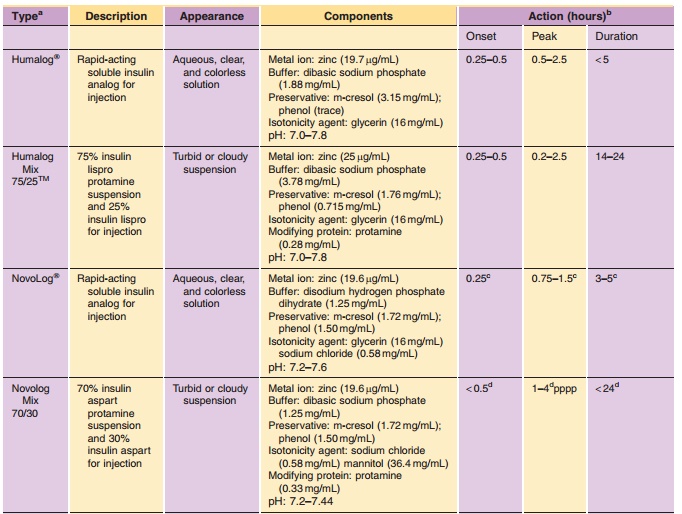 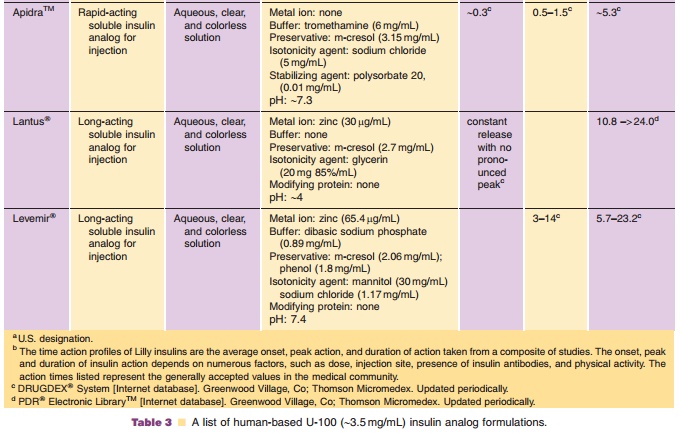 (Brange et al., 1988, 1990; Brems et al., 1992). One such monomeric analog, LysB28ProB29-human insulin (Humalog or Liprolog ; insulin lispro; Eli Lilly & Co., Lilly Corporate Center, Indianapolis, IN) has been developed and does have a more rapid time-action profile, with a peak activity of approximately 1 hr (Howey et al., 1994). The sequence inversion at positions B28 and B29 yields an analog with reduced self-association behavior compared to human insulin (Fig. 1; Table 1); however, insulin lispro can bestabilized in a preservative-dependent hexameric complex that provides the necessary chemical and physical stability required by insulin preparations. Despite the hexameric complexation of this analog, insulin lispro retains its rapid time-action. Based on the crystal structure of the insulin lispro hexameric complex, Ciszak et al. (1995) have hypothesized that the reduced dimerization properties of the analog, coupled with the preservative dependence, yields a hexameric complex that readily dissociates into monomers after rapid diffusion of the phenolic preservative into the subcutaneous tissue at the site   of injection (Fig. 5). Consequently, the substantial dilution (105 ) of the human insulin zinc hexamers is not necessary for the analog to dissociate from hexamers to monomers/dimers, which is required for absorption.

It is important to highlight that the properties engineered into Humalog not only provide the patient with a more convenient therapy, but also improve control of postprandial hyperglycemia and reduce the frequency of severe hypoglycemic events (Anderson et al., 1997; Holleman et al., 1997).

Since the introduction of insulin lispro, two additional rapid-acting insulin analogs have been introduced to the market. The amino acid modifications made to the human insulin sequence to produce these analogs are depicted in Table 1. Like insulin lispro, both analogs are supplied as neutral pH solutions containing phenolic preservative. The design strategy for AspB28-human insulin (NovoRapid or NovoLog; insulin aspart; Novo Nordisk A/S,

Corporate Headquarters, Novo Alle´, Bagsvaerd, Denmark) (Brange et al., 1988, 1990) involves the replacement of ProB28 with a negatively charged aspartic acid residue. Like LysB28ProB29-human insulin, AspB28-human insulin has a more rapid time-action following subcutaneous injection (Heinemann et al., 1997). This rapid action is achieved through a reduction in the self-association behavior compared to human insulin (Brange et al., 1990; Whittingham et al., 1998). The other rapid-acting analog, LysB3-GluB29-human insulin (ApidraTM, insulin glulisine; Sanofi-Aventis), involves a substitution of the lysine residue at position 29 of the B-chain with a negatively charged glutamic acid. Additionally, this analog replaces the AsnB3 with a positively charged lysine. Scientific reports describing the impact of these changes on the molecular properties of this analog are lacking. However, the glutamic acid substitution occurs at a position known to be involved in dimer formation (Brange et al., 1990) and may result in disruption of key interactions at the monomer– monomer interface. The Asn residue at position 3 of the B-chain plays no direct role in insulin self-association (Brange et al., 1990), but it is flanked by two amino acids involved in the assembly of the Zn2þ insulin hexamer. Despite the limited physicochemical information on insulin glulisine, studies conducted in persons with either Type 1 or Type 2 diabetes (Dailey et al., 2004; Dreyer et al., 2005) confirm the analog displays similar pharmacological properties as insulin lispro. Interestingly, insulin glulisine is not formulated in the presence of zinc as are the other rapid-acting analogs. Instead, insulin glulisine is formulated in the presence of a stabilizing agent (polysorbate 20) (Table 3). The surfactant in the formulation presumably minimizes higher order association and contributes to more rapid adsorption of the monomeric species.

In addition to the aforementioned rapid-acting formulations, manufacturers have designed soluble formulations for use in external or implanted infusion pumps. In most respects, these formulations are very similar to Regular insulin (i.e., hexameric association state, preservative, and zinc); however, buffer and/or surfactants may be included in these formulations to minimize the physical aggregation of insulin that can lead to clogging of the infusion sets. In early pump systems, gas-permeable infusion tubing was used with the external pumps. Consequently a buffer was added to the formulation in order to minimize pH changes due to dissolved carbon dioxide. Infusion tubing composed of materials having greater resis-tance to carbon dioxide diffusion is currently being used and the potential for pH-induced precipitation of insulin is greatly reduced. All three of the commercially available rapid-acting insulin analogs are approved for use in external infusion pumps. 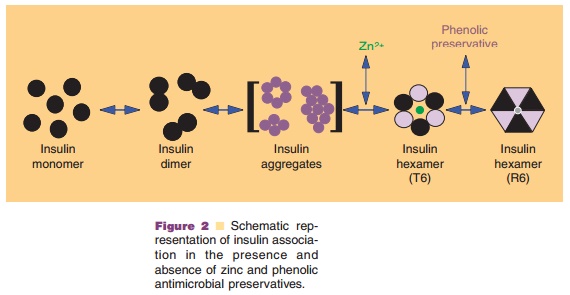