Rape is a crime of violence and humiliation of the victim expressed through sexual means.

Rape can occur between strangers, acquaintances, mar-ried persons, and persons of the same sex, although seven states define domestic violence in a way that excludes same-sex victims. Almost two thirds of rapes are commit-ted by someone known to the victim (RAINN, 2009). A phenomenon called date rape (acquaintance rape) may occur on a first date, on a ride home from a party, or when the two people have known each other for some time. It is more prevalent near college and university campuses. The rate of serious injuries associated with dating violence increases with increased consumption of alcohol by either the victim or the perpetrator.

Rape is a highly underreported crime: Estimates are that only one rape is reported for every 4 to 10 rapes that occur. The underreporting is attributed to the victim’s feel-ings of shame and guilt, the fear of further injury, and the belief that she has no recourse in the legal system. Victims of rape can be any age: Reported cases have victims rang-ing in age from 15 months to 82 years. The highest inci-dence is in girls and women 16 to 24 years of age. Girls younger than 18 years were the victims in 61% of rapes reported (van der Kolk, 2005).

Rape most commonly occurs in a woman’s neighbor-hood, often inside or near her home. Most rapes are pre-meditated. Strangers perpetrate 43% of rapes, husbands and boyfriends commit 19%, and other relatives account for 38%. Rape results in pregnancy about 10% of the time (van der Kolk, 2005).

Male rape is a significantly underreported crime. It can occur between gay partners or strangers but is most prevalent in institutions such as prisons or maximum-security hospitals. Estimates are that 2% to 5% of male inmates are sexually assaulted, but the figure may be much higher. This type of rape is particularly violent, and the dynamics of power and control are the same as for heterosexual rape.

Most men who commit rape are between 25 and 44 years old. In terms of race, 51% are white and tend to rape white victims, and 47% are African American and tend to rape African-American victims; the remaining 2% come from all other races. Alcohol is involved in 34% of cases. Rape often accompanies another crime. Almost 75% of arrested rapists have prior criminal histories, including other rapes, assaults, robberies, and homicides (van der Kolk, 2005).

·    Sexual sadists who are aroused by the pain of their victims

·    Exploitive predators who impulsively use their victims as objects for gratification

·    Men for whom rape is a displaced expression of anger and rage.

Feminist theory proposes that women have historically served as objects for aggression, dating back to when women (and children) were legally the property of men. In 1982, for the first time, a married man was convicted of raping his wife, signaling the end of the notion that sexual intercourse could not be denied in the context of marriage.

Women who are raped are frequently in life-threatening situations, so their primary motivation is to stay alive. At times, attempts to resist or fight the attacker succeed; inother situations, fighting and yelling result in more severe physical injuries or even death. Degree of submission is higher when the attacker has a weapon such as a gun or knife. In addition to forcible penetration, the more violent rapist may urinate or defecate on the woman or insert for-eign objects into her vagina and rectum.

The physical and psychological trauma that rape vic-tims suffer is severe. Related medical problems can include acute injury, sexually transmitted diseases, pregnancy, and lingering medical complaints. A cross-sectional study of medical patients found that women who had been raped rated themselves as significantly less healthy, visited a phy-sician twice as often, and incurred medical costs more than twice as high as women who had not experienced any criminal victimization. The level of violence experienced during the assault was found to be a powerful predictor of future use of medical services. Many victims of rape expe-rience fear, helplessness, shock and disbelief, guilt, humil-iation, and embarrassment. They also may avoid the place or circumstances of the rape; give up previously pleasur-able activities; experience depression, anxiety, PTSD, sexual dysfunction, insomnia, and impaired memory; or contemplate suicide (RAINN, 2009).

Until recently, the rights of rape victims often were ignored. For example, when rape victims reported a rape to authorities, they often faced doubt and embarrassing questions from male officers. The courts did not protect the rights of victims; for example, a woman’s past sexual behavior was admissible in court—although the past crim-inal record of her accused attacker was not. Laws to cor-rect these problems have been enacted on a state-by-state basis since the mid-1980s

Although the treatment of rape victims and the prose-cution of rapists have improved in the past two decades, many people still believe that somehow a woman provokes rape by her behavior and that the woman is partially responsible for this crime. 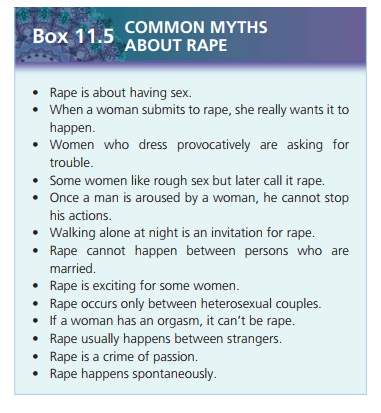 To preserve possible evidence, the physical examination should occur before the woman has showered, brushed her teeth, douched, changed her clothes, or had anything to drink. This may not be possible, because the woman may have done some of these things before seeking care. If there is no report of oral sex, then rinsing the mouth or drinking fluids can be permitted immediately.

To assess the woman’s physical status, the nurse asks the victim to describe what happened. If the woman cannot do so, the nurse may ask needed questions gently and with care. Rape kits and rape protocols are available in most emergency room settings and provide the equipment and instructions needed to collect physical evidence. The physician is pri-marily responsible for this step of the examination.

Victims of rape fare best when they receive immediate sup-port and can express fear and rage to family members, nurses, physicians, and law enforcement officials who believe them. Education about rape and the needs of vic-tims is an ongoing requirement for health-care profession-als, law enforcement officers, and the general public.

These signs, used at the State University of New York at Buffalo (2008) to educate students about date rape, can alert women to the characteristics of men who are likely to commit dating violence. Examples include expressing negativity about women, acting tough, engaging in heavy drinking, exhibiting jealousy, making belittling comments, expressing anger, and using intimidation.

Rape treatment centers (emergency services that coor-dinate psychiatric, gynecologic, and physical trauma ser-vices in one location and work with law enforcement agencies) are most helpful to the victim. In the emergency setting, the nurse is an essential part of the team in provid-ing emotional support to the victim. The nurse should allow the woman to proceed at her own pace and not rush her through any interview or examination procedures.

Giving back to the victim as much control as possible is important. Ways to do so include allowing her to make decisions, when possible, about whom to call, what to do next, what she would like done, and so on. It is the wom-an’s decision about whether or not to file charges and tes-tify against the perpetrator. The victim must sign consent forms before any photographs or hair and nail samples are taken for future evidence.

Prophylactic treatment for sexually transmitted diseases such as chlamydia or gonorrhea is offered. Doing so is cost-effective: many victims of rape will not return to get definitive test results for these diseases. HIV testing is strongly encouraged at specified intervals because sero-conversion to positive status does not occur immediately. Women are also encouraged to engage in safe-sex practices until the results of HIV testing are available. Prophylaxis with ethinyl estradiol and norgestrel (Ovral) can be offered to prevent pregnancy. Some women may elect to wait to initiate intervention until they have a positive pregnancy test result or miss a menstrual period.

Rape crisis centers, women’s advocacy groups, and other local resources often provide a counselor or volunteer to be with the victim from the emergency room through longer-term follow-up. This person provides emotional support, serves as an advocate for the woman throughout the pro-cess, and can be totally available to the victim. This type of complete and unconditional support is often crucial to recovery.

Therapy usually is supportive in approach and focuses on restoring the victim’s sense of control; relieving feelingsof helplessness, dependency, and obsession with the assault that frequently follow rape; regaining trust; improving daily functioning; finding adequate social support; and dealing with feelings of guilt, shame, and anger. Group therapy with other women who have been raped is a par-ticularly effective treatment. Some women attend both individual and group therapies.

It often takes 1 year or more for survivors of rape to regain previous levels of functioning. In some cases, survi-vors of rape have long-term consequences, such as PTSD.