Family violence encompasses spouse battering; neglect and physical, emotional, or sexual abuse of children; elder abuse; and marital rape. In many cases, family members tolerate abusive and violent behavior from relatives they would never accept from strangers. In violent families, the home, which is normally a safe haven of love and protec-tion, may be the most dangerous place for victims.

Research studies have identified some common charac-teristics of violent families regardless of the type of abuse that exists. 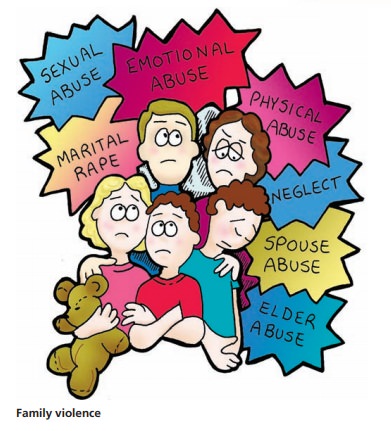 One characteristic of violent families is social isolation. Members of these families keep to themselves and usually do not invite others into the home or tell them what is happening. Often, abusers threaten victims with even greater harm if they reveal the secret. They may tell chil-dren that a parent, sibling, or pet will die if anyone outside the family learns of the abuse. So children keep the secret out of fear, which prevents others from “interfering with private family business.”

Abuse of Power and Control

The abusive family member almost always holds a posi-tion of power and control over the victim (child, spouse, or elderly parent). The abuser exerts not only physical power but also economic and social control. He or she is often the only family member who makes decisions, spends money, or spends time outside the home with other people. The abuser belittles and blames the victim, often by using threats and emotional manipulation. If the abuser perceives any indication, real or imagined, of vic-tim independence or disobedience, violence usually esca-lates. Twenty-two percent of nonfatal violence against women is perpetrated by an intimate partner, compared with only 3% of men injured by an intimate partner. Inti-mate partners are responsible for one third of female homicides, whereas only 3% of male homicides are com-mitted by a female intimate partner (Bureau of Justice Statistics, 2007).

Alcohol and Other Drug Abuse

Substance abuse, especially alcoholism, has been asso-ciated with family violence. This finding does not imply

· cause-and-effect relationship. Alcohol does not cause the person to be abusive; rather, an abusive person also is likely to use alcohol or other drugs. Two thirds of victims of intimate violence report that alcohol was involved in the violent incident. Women whose part-ners abused alcohol were 3.6 times more likely than other women to be assaulted by their partners (Marin Institute, 2008). Although alcohol may not cause the abuse, many researchers believe that alcohol may diminish inhibitions and make violent behavior more intense or frequent.

Alcohol is also cited as a factor in acquaintance rape or date rape. According to the Marin Institute (2008), 40% of convicted rape and sexual assault offenders reported drink-ing alcohol at the time of their crime. In addition, use of the illegal drug flunitrazepam (Rohypnol) to subdue potential victims of date rape is on the rise in the United States (van der Kolk, 2005).

The intergenerational transmission process shows that patterns of violence are perpetuated from one generation to the next through role modeling and social learning (van der Kolk, 2005). Intergenerational transmission suggests that family violence is a learned pattern of behavior. For example, children who witness violence between their parents learn that violence is a way to resolve conflict and is an integral part of a close relationship. Statistics show that one third of abusive men are likely to have come from violent homes where they witnessed wife-beating or were abused themselves. Women who grew up in violent homes are 50% more likely to expect or accept violence in their own relationships. Not all persons exposed to family vio-lence, however, become abusive or violent as adults. Therefore, this single factor does not explain the perpetu-ation of violent behavior.