Child abuse or maltreatment generally is defined as the intentional injury of a child.

Child abuse or maltreatment generally is defined as the intentional injury of a child. It can include physical abuse or injuries, neglect or failure to prevent harm, failure to provide adequate physical or emotional care or supervi-sion, abandonment, sexual assault or intrusion, and overt torture or maiming (Bernet, 2005). In the United States, each state defines child maltreatment, identifies specific reporting procedures, and establishes service delivery systems. Although similarities exist among the laws of the 50 states, there is also a great deal of variation. For this reason, accurate data on the type, frequency, and severity of child maltreatment across the country are dif-ficult to obtain.

2.2% were medically neglected. Also, 15% suffered “other” types of maltreatment such as abandonment, physical threats, and congenital drug addiction. The total exceeds 100% because some children are counted in more than one category. Fifteen hundred thirty chil-dren died from maltreatment: 75% were under age 4 and 44% were younger than 1 year (Childhelp, 2008).

Fathers, stepfathers, uncles, older siblings, and live-in partners of the child’s mother often perpetrate abuse on girls. About 75% of reported cases involve father–daughter incest; mother–son incest is much less frequent. Estimates are that 15 million women in the United States were sexually abused as children, and one third of all sexually abused victims were molested when they were younger than 9 years of age. Accurate statis-tics on sexual abuse are difficult to obtain because many incidences are unreported as a result of shame and embarrassment. In other cases, women do not acknowl-edge sexual abuse until they are adults. Risk for depres-sion, suicide attempts, marital problems, and marriage to an alcoholic are increased among adults with a his-tory of childhood sexual abuse (Harris, Lieberman, & Marans, 2007).

Physical abuse of children often results from unreasonably severe corporal punishment or unjustifiable punishment such as hitting an infant for crying or soiling his or her diapers. Intentional, deliberate assaults on children include burning, biting, cutting, poking, twisting limbs, or scald-ing with hot water. The victim often has evidence of old injuries (e.g., scars, untreated fractures, or multiple bruises of various ages) that the history given by parents or care-givers does not explain adequately.

Sexual abuse involves sexual acts performed by an adult on a child younger than 18 years. Examples include incest, rape, and sodomy performed directly by the person or with an object, oral–genital contact, and acts of moles-tation such as rubbing, fondling, or exposing the adult’s genitals. Sexual abuse may consist of a single incident or multiple episodes over a protracted period. A second type of sexual abuse involves exploitation, such as making, promoting, or selling pornography involving minors, and coercion of minors to participate in obscene acts.

Neglect is malicious or ignorant withholding of physi-cal, emotional, or educational necessities for the child’s well-being. Child abuse by neglect is the most prevalent type of maltreatment and includes refusal to seek health care or delay doing so; abandonment; inadequate supervi-sion; reckless disregard for the child’s safety; punitive, exploitive, or abusive emotional treatment; spousal abuse in the child’s presence; giving the child permission to be truant; or failing to enroll the child in school.

alcoholism, drug use, or prostitution—and the neglect that results—also fall within this category.

Parents who abuse their children often have minimal par-enting knowledge and skills. They may not understand or know what their children need, or they may be angry or frustrated because they are emotionally or financially unequipped to meet those needs. Although lack of educa-tion and poverty contribute to child abuse and neglect, they by no means explain the entire phenomenon. Many inci-dences of abuse and violence occur in families who seem to have everything—the parents are well educated with suc-cessful careers, and the family is financially stable.

Parents who abuse their children often are emotionally immature, needy, and incapable of meeting their own needs much less those of a child. As in spousal abuse, the abuser frequently views his or her children as property belonging to the abusing parent. The abuser does not value the children as people with rights and feelings. In some instances, the parent feels the need to have children to replace his or her own faulty and disappointing childhood; the parent wants to feel the love between child and parent that he or she missed as a child. The reality of the tremen-dous emotional, physical, and financial demands that comes with raising children usually shatters these unreal-istic expectations. When the parent’s unrealistic expecta-tions are not met, he or she often reverts to using the same methods his or her parents used.

This tendency for adults to raise their children in the same way they were raised perpetuates the cycle of family violence. Adults who were victims of abuse as children fre-quently abuse their own children (Bernet, 2005).

As with all types of family violence, detection and accurate identification are the first steps. Burns or scalds may have an identifiable shape, such as cigarette marks, or may have a “stocking and glove” distribution, indicating scalding. The parent of an infant with a severe skull fracture may report that he or she “rolled off the couch,” even though the child is too young to do so or the injury is much too severe for a fall of 20 inches. Bruises may have familiar, recognizable shapes such as belt buck-les or teeth marks.

Children who have been sexually abused may have uri-nary tract infections; bruised, red, or swollen genitalia; tears of the rectum or vagina; and bruising. The emotional response of these children varies widely. Often, these chil-dren talk or behave in ways that indicate more advanced knowledge of sexual issues than would be expected for their ages. Other times, they are frightened and anxious and may either cling to an adult or reject adult attentionentirely. The key is to recognize when the child’s behavior is outside what is normally expected for his or her age and developmental stage. Seemingly unexplained behavior, from refusal to eat to aggressive behavior with peers, may indicate abuse.

The nurse does not have to decide with certainty that abuse has occurred. Nurses are responsible for reporting suspected child abuse with accurate and thorough docu-mentation of assessment data. All 50 states have laws, often called mandatory reporting laws, that require nurses to report suspected abuse. The nurse alone or in consulta-tion with other health team members (e.g., physicians or social workers) may report suspected abuse to appropriate local governmental authorities. In some states, that author-ity is Child Protective Services, Children and Family Ser-vices, or the Department of Health. The number to call can be located in the local telephone book. The reporting per-son may remain anonymous if desired. People who work in such agencies have special education in the investiga-tion of abuse. Questions must be asked in ways that do not further traumatize the child or impede any possible legal actions. The generalist nurse should not pursue investiga-tion with the child: it may do more harm than good. 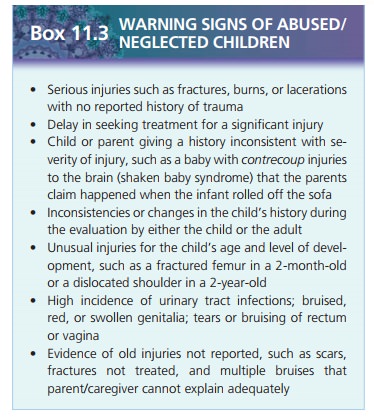 The first part of treatment for child abuse or neglect is to ensure the child’s safety and well-being (Bernet, 2005). This may involve removing the child from the home, which also can be traumatic. Given the high risk for psy-chological problems, a thorough psychiatric evaluationalso is indicated. A relationship of trust between the thera-pist and the child is crucial to help the child deal with the trauma of abuse. Depending on the severity and duration of abuse and the child’s response, therapy may be indi-cated over a significant period.

Long-term treatment for the child usually involves pro-fessionals from several disciplines, such as psychiatry, social work, and psychology. The very young child may communicate best through play therapy, where he or she draws or acts out situations with puppets or dolls rather than talks about what has happened or his or her feelings. Social service agencies are involved in determining whether returning the child to the parental home is possible based on whether parents can show benefit from treatment. Fam-ily therapy may be indicated if reuniting the family is fea-sible. Parents may require psychiatric or substance abuse treatment. If the child is unlikely to return home, short-term or long-term foster care services may be indicated.