Tunnelling in soft ground or soft rock is a specialized job. It does not involve the use of explosives and the requisite excavation work is done using hard tools such as pickaxes and shovels.

There are various methods of tunnelling. The selection of a method depends upon the size of the bore, the condition of the ground, the equipment available, and the extent to which timbering is required. Tunnelling may be basically divided into two main groups.

(a)  Tunnelling in hard rocks

(b) Tunnelling in soft rocks

These are described in detail in the subsequent sections. Tunnelling through water-bearing strata and compressed air tunnelling are discussed subsequently.

Tunnelling in soft ground or soft rock is a specialized job. It does not involve the use of explosives and the requisite excavation work is done using hard tools such as pickaxes and shovels. In recent times, compressed air has also been used for this purpose. During excavation, the rail requires support at the sidewalls and the roofs depending upon the type of soil. The support could be provided in the form of timber or steel plates or other similar material. The various operations involved in soft rock tunnelling are as follows.

(a)  Excavation or mining

(b) Removal of excavated material

The nature of the ground is the most important factor in deciding the method to be used for tunnelling. The types of ground which are generally encountered in the field are detailed in Table 30.3. 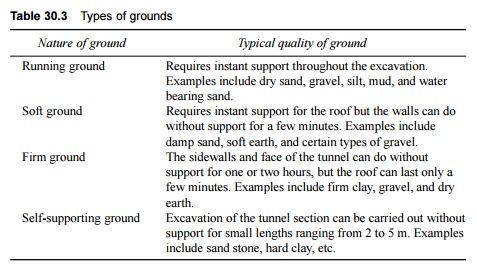 In the case of soft rock, the selection of the method of tunnelling depends upon the following important factors.

(a)  Nature of ground

(b) Size of tunnel

Some of the important methods of tunnelling in soft rock are described in the following sections.

Forepoling is an old method of tunnelling through soft ground. In this method, a frame is prepared in the shape of the letter A, placed near the face of the tunnel, and covered with suitable planks. Poles are then inserted at the top of the frame up to a viable depth. The excavation is carried out below these poles, which are supported by vertical posts. The excavation is carried out on the sides and the excavated portion is suitably supported by timber. The entire section of the tunnel is covered thus. The process is repeated as the work progresses. 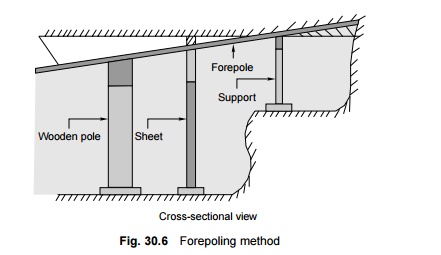 Forepoling is a slow and tedious process and requires skilled manpower and strict supervision. The method has to be meticulously repeated in sequence and there is no short cut for the same. 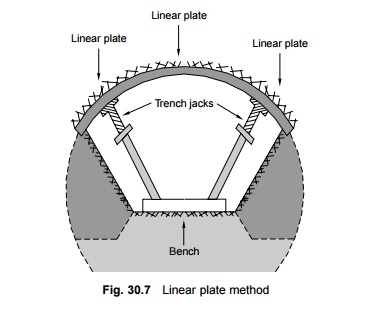 (a)  The linear plates are light and can be handled easily.

(b) The number of joints is less, as the linear plates are bigger in size, and as

such the maintenance cost is low.

(a)  The steel plates are fireproof and can be safely used while working in compressed air condition.

(d) The necessary work can be done by semi-skilled staff.

(e)  There is considerable saving in terms of the excavation and concrete required.

The needle beam method (Fig. 30.8) is adopted in terrains where the soil permits the roof of the tunnel section to stand without support for a few minutes. In this method, a small drift is prepared for inserting a needle beam consisting of two rail steel (RS) joists or I sections and is bolted together with a wooden block in the centre. The roof is supported on laggings carried on the wooden beam. The needle beam is placed horizontally with its front end supported on the drift and the rear end supported on a vertical post resting on the lining of the tunnel. Jacks are fixed on the needle beam and the tunnel section is excavated by suitably incorporating timber. This method of tunnelling is more economical compared to other methods.

In this method (Fig. 30.9), a drift is driven into the top of the tunnel. The drift is supported by laggings, caps, and two vertical posts. The sides of the drift are then widened and additional support is provided using timber planks and struts. The process of widening is continued till it reaches the springing level. Wall plates are fixed at the springing level, which in turn are supported by vertical posts. The vertical posts now occupy the entire roof level. The posts supporting the drift can then be removed and tunnelling work continued further in a similar manner.

This method is similar to the American method except that the roof load is supported by underpinning instead of using vertical posts. A drift is driven into the top of the tunnel about 5 m ahead of the existing arch lining. The drift is subsequently widened on both sides and supported by crown bars and posts. The work is carried on till the springing level is reached. The sill is then extended across the tunnel and the extended piece is supported by underpinning. This method requires good quality timber as well as simultaneous and frequent shifting from place to place. 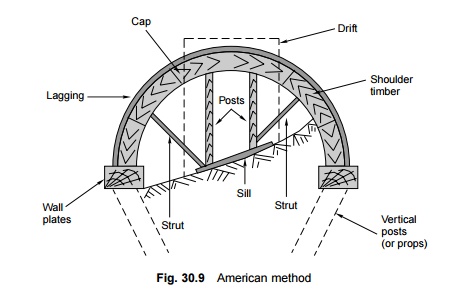 This method is used for long tunnels, particularly those at great depths, where the walls of the excavation may yield under the weight of the cover. It involves excavating the whole section for a short length and furnishing with sidewalls and an arch.

This method is particularly suitable for areas where the height of the overburden is less and the surface is not to be disturbed. In this case, the heading is excavated first and supported by crown bar posts and laggings. The sides are excavated next and supported by crown bars and posts. Finally, the work of lining the arch is carried out and further excavation is done.